Nothing to be proud of 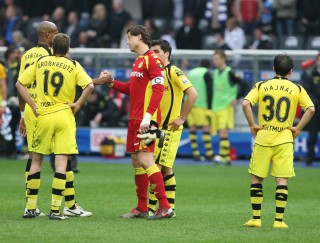 Good things first: After the 0-0 in Berlin, Borussia is one point closer to Bayer Vizekusen and still on rank four of the Bundesliga ranking. However, a tie against a team which will probably play in league two next year, feels more like a defeat. And to be honest, we have to thank Berlin players for not getting the victory over a Borussia, which seemed to have concentrated more on the important match against Bremen next week, than on the match against the tail-light of the ranking.

Both teams had no reason to change the line-up since Berlin got an impressive “We’re not dead yet”-victory over German champion VfL Wolfsburg last week and we won 3:0 against Vizekusen. Nuri Sahin got back into the team and replaced Tamas Hajnal, no more changes needed. Round about 15.000 supporters of Borussia made it to Berlin, the Olympiastadion was filled with 60.400 fans, which is an impressive number for a team which has only outsider chances to stay in league one. 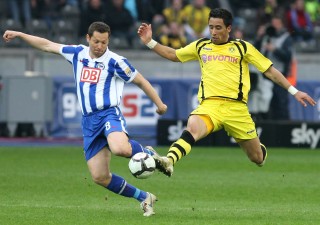 During the first 45 minutes, we had more possession of the ball but didn’t use it to our advantage, since the only team attacking and having great chances was Hertha BSC. Kacar’s shot over the goal was a first warning (3rd), Theofanis Gekas couldn’t use a fault of Neven Subotic (19th) and Adrian Ramos missed the goal, after beating Subotic and Owomoyela with a great dribbling (28th). Two small opportunities for Borussia took place in the first half between minutes 30 and 40 after crosses, when Barrios marginally missed the goal with a header, after a cross from the right given by Kuba (31st) and Santana’s header was too high, to hit the goal after a corner kick by Mo Zidan (35th). Shortly before the break, Gekas had to score after a pass from the right by Lukas Piszczek, but was too surprised to do so. Even in half one, Borussia could be happy to make it to the break with no goal against us, thanks to the great uncertainty of Hertha BSC. 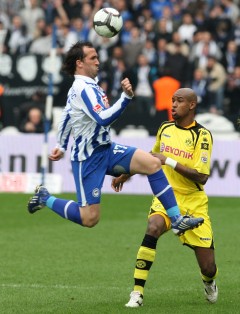 It didn’t get better in half two though. Again it was Hertha, who had great opportunies, but failed and proved, why they will probably go to league two next year. Ramos appeared right in front of the goal in minute 49, but tried to chip the ball over Weidenfeller, which turned out to be a really sad try and a few minutes later, Ramos took the ball instead of Gekas, who was in better position and his header missed the goal (69th). Then the last curious fifteen minutes of the match began. A cross by Marcel Schmelzer, given from the left, makes his way to the head of Barrios, whose great header was brilliantly saved by Berlin’s Drobny (75th) and we could have been given a penalty kick, when Bengtsson held back Lucas in the penalty area (78th). Seconds later, the shock: a long ball from the middle of the field seemed to be under control by Felipe Santana, who tried to pass the ball back to Weidenfeller with a header, but somehow didn’t see Gekas standing between him and our keeper, the Greek used the opportunity, to chip the ball with a header over Roman and scored for his team. A deserved 1-0 lead for Hertha… but referee Lutz Wagner had did not agree. Gekas stood off-side, when the pass from the back came in front of the goal, but the header by Santana could have been judged as a new situation, making the goal regular. However, the last chance of the match was Nuri Sahin’s shot, which had to hit the goal, since he was standing completely blank, but Sahin shot in a supine position and missed. 0-0 in Berlin… nothing to be proud of. 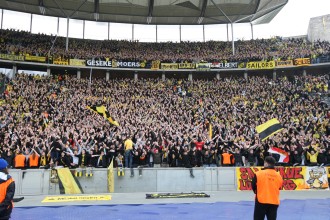 Borussia got away with a black eye and, like I said earlier, got one point closer to Leverkusen, but if you want to go to Europe, you have to win against a team, standing on the last rank of the Bundesliga. However, next week will be of much more importance, since it will show us the direction for the following rest of the season. If we could beat Bremen next Saturday at Westfalenstadion, we are likely to play in Europe next season and we could take a look at Leverkusen and perhaps dream about making it to the Champions League. But if we lose, our concentration should be on keeping the rank, allowing to qualify for Europe League. A really decisive match, which isn’t impossible to win, but if we play against Bremen, like we did against Hertha, we will be sent home with three or four goals and no hope going for Champions League.