Who has made it, whose time is still to come? A closer look on our new members 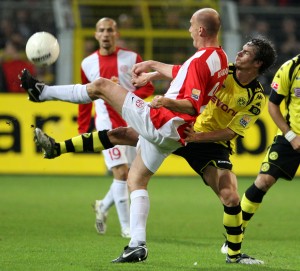 26 games have been played, Borussia is on the way to Europe and after Saturday's win over Bochum back in the drivers seat as number 4 of the current Bundesliga table. Seven months have passed since the start of this season, so we think that it is long overdue to have a closer look on our new members who found their way to the best club in the world before the season which will hopefully be remembered as the season where Borussia rose up again and finally made its way to Europe. Six players, six comments and a short look into the future:

Markus Feulner: Feulner is a 13-times U21-german national player, coming from Mainz 05 as a free agent. Being 28 years old, he is one of the oldest players of our young team with the experience of 74 matches in the first league and 70 matches in league two. He was one of the players I expected to get his time in the line-up but he has still to prove his potential. After a serious damage to his right ankle, he has been out for months and has just played against Wilhelmshaven this week. Before his injury, Feulner was often brought in the games late, four times after the 80th minute, once in minute 55. Only on day 13, Feulner was in the starting line-up and was replaced after one hour. Hopefully, he will get back in the team soon to show his potential of being a great playmaker and also a great scorer, which he proved at Mainz 05 while playing in league two. 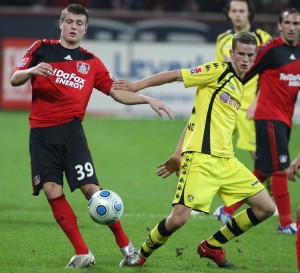 Sven Bender: He is one of the surprises of this season. Coming from 1860 Munich in exchange with Antonio Rukavina, the 20-year-old midfielder was a great replacement for our skipper Sebastian Kehl and formed a solid double-six with Nuri Sahin. He started in 14 matches and got great critics from the press and also the fans and seems to be a real reinforcement of our midfield. Also, it has to be said that although being slidelined by injuries over the last weeks, he kept fighting and playing until he wasn’t able to for the last two weeks. With Sahin being out against Leverkusen on Saturday, we shall hope that Sven, twin of Bayer’s Lars Bender, will be able to be in the line-up again to form the double-six with our skipper.

Dimitar Rangelov: Like Markus Feulner, Dimitar Rangelov is hard to evaluate because of the disruption of his foot which took him out for several months. Before, he was part of the starting line-up once and was brought in for twenty minutes in five matches. Coming from Cottbus with the reference of having scored 15 times in 57 matches in Bundesliga, he also has to prove that he can be a replacement for Barrios or our other forwards. Rangelov also played against Wilhelmshaven this week and is expected to be back very soon.

Damien Le Tallec: It is really hard to make an evaluation on our players when most of them were out for good due to injuries most of the time. Damien Le Tallec is no difference to Rangelov and Feulner, since he injured his shoulder during the match against Osnabrück in October. With a total of four matches in Bundesliga, three times coming on as a sub, he is the player who is most difficult to be evaluated. But in my opinion, Le Tallec has potential and since he is only 19 years old, he has a lot of time left to show what he is worth. 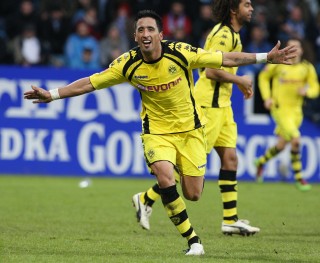 Lucas Barrios: After the transfer of Alexander Frei, Lucas Barrios had the pressure of replacing a fan favorite. Coming from Chile with great stats, he at first had problems to fight his way into Bundesliga which has a different gameplay than the Chilean league. On day 8, he finally showed his goalgetter ability against Gladbach when he scored the goal to earn the 1-0 victory and then scored for the following four weeks. He proved critics who called him “Weltnixjäger” wrong and is now one of the top goalgetters of the season with 13 goals in 25 matches. Alex Frei will always be remembered in Dortmund, but with Barrios replacing him, we have found a younger and perhaps even better replacement since Barrios has not scored from the spot (which Nuri Sahin does these days) like Frei last season. At this point in time, you can surely say that the 4.2 million Euros were worth it. And even if it’s a little bit late: Welcome to Dortmund, Lucas!

Kevin Großkreutz: The biggest surprise of the season. “Dortmunder Jung” Kevin came from second division side RW Ahlen and made his fairytale story come true. Even at the time Großkreutz played for Ahlen in league two, he was a regular visitor of our matches, standing on the Südtribüne and giving everything for his club by chanting 90 minutes a match. The season for Kevin started with being the joker for the first 13 days, when he was brought in 11 times, often late. On day 14, Großkreutz was part of the first eleven players and didn’t give this position away since that day. One week later, he scored for the first time against Nuremberg and let three other goals follow until today. Every time Großkreutz steps food in the Westfalenstadion, the Südtribüne answers with “Dortmunder Jung”-Chants which Großkreutz described as an unbelievable feeling in his column on schwatzgelb.de. Very few people would have thought that Großkreutz will find his way to the starting line-up this fast, but he proved them all wrong and now lives his dream of playing for Borussia Dortmund.

What expects us this summer? 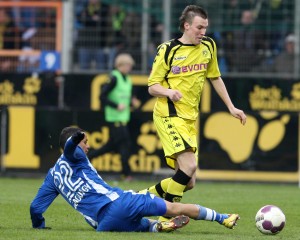 Six new members have found their way to Dortmund. With Barrios, Bender and Großkreutz, I consider half of them being a reinforcement of our team, while the other half didn’t get a chance to show their abilities due to injury issues. New transfers this summer will be linked to the answer of the question, if we could make it to Europe or not. Perhaps Tinga will leave us this year, but the rest is expected to stay. Transfers we should consider to make is a back-up for Owomoyela to motivate him and perhaps other jokers since we will need a bigger squad for a possible Europa League spot, the name Lewandowski never went away from Dortmund since he was rumored to come last summer.