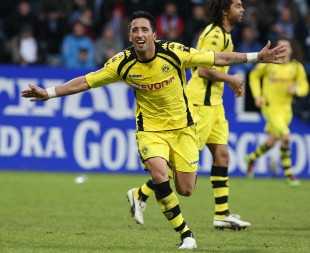 Derbywinner! Ok, I have to admit, it was only the “little” derby, which was more important for our opponent than it was for us, but the 4-1 victory in Bochum is another step towards Europe League and it surely was an impressive victory – some few minutes before and after the break excluded. Three more points and a plus of three goals for our still not so hot goal difference – we come back from Bochum with full hands.

Jürgen Klopp had no reason to change anything since our team defeated the ponys convincingly one week ago. On the bench, some changes had to be made because Marc Ziegler was out due to illness and Dede missed the match because of a rupture of a muscle fiber. In addition, the injured Mats Hummels, Sven Bender, Markus Feulner, Tinga, Mario Götze and Yasin Öztekin couldn’t compete as well. But with our skipper on board again, fans looked forward to the match very enthusiastically. Our opponent from only 17 kilometres away had to replace former Dortmund forward Diego Klimowicz, Mavraj and Prokoph missed because of their fifth booking, the rest was the best they could offer… even if that was not too much. Bochum coach Heiko Herrlich who played in Dortmund for many years, surely expected his reunion to be less frustrating. 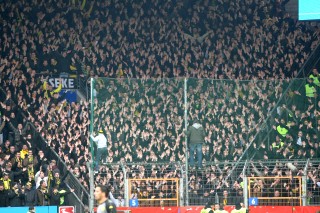 Our team started like they ended against Gladbach… dominating, with quick and good chances. Barrios was beaten by keeper Heerwagen (11th) and one minute later Sahins header, which was beautifully prepared by Owomoyela, only hit the inner side of the left-hand post. But the thousands of Dortmund fans who travelled over the B1 highway to get to Bochum and marked a third of the whole attendance didn’t have to wait long until they could celebrate. After a foul by Freier and Dabrowski, Sahin crossed from the left, Heerwagen comes out of his goal, but misses the ball, giving our skipper the opportunity to score (18th). Later, the goal will be officially given to Bochums Maltritz, but inofficially, we should give the credits to Kehl since he deserved it most. Now the atmosphere in the Ruhr Stadion was brilliant, every guest was bouncing up and down, singing and dreaming about the way to Europe, while Bochum underlined why they’re nicknamed “the grey mouse”. Three minutes later, Großkreutz nearly doubled the score after a cross by Owomoyela, but his goal was cancelled because of off-side just like Barrios goal later on (32nd). These right decisions didn’t matter at the end, because our team kept playing forward and after Kuba beat three defenders with a great dribbling, Zidan finally doubled the score with a nice shot from the edge of the penalty area (27th). After Maric’s dismissal because of his attack against Kuba, the match seemed to be decided, but Bochum finally woke up and started to fight, Sestak could have scored shortly before the break, but missed the goal after his shot had Weidenfeller beaten (40th). 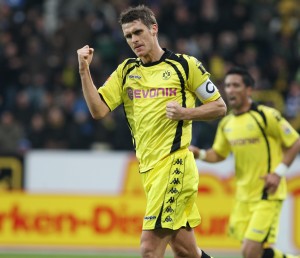 Incomprehensibly, Borussia wasn’t the team to be advantaged by the powerplay since Bochum more and more came back to the match, with Lewis Holtby striking after a nice assist by Azaouagh and with special thanks to Zidan who gave away the ball with a bloodcurdling pass (53rd). Holtby, he of all people, had to score against us, since he is loaned out to Bochum from our worst enemy. Fortunately, it didn’t end even worse, Bochum had no big chances and finally Lucas Barrios decided the match with a brace in onlythree minutes, one with a easy tap-in after Hajnal only hit Heerwagen with his shot assisted by joker Valdez (74th) and the other after confusion in the penalty area after a corner kick (77th). The final beginning of a great party for Dortmund’s supporters, who sent the supporters of the little rival back home with singing “The grey mouse is going home now”, which rhymes in German better than in English (“Die graue Maus geht jetzt nach Haus”) and of course, again dreaming about Europe League and possible opponents like Olmütz, Liberec or Valencia.

However, the victory was paid in full since Sahin will miss against Leverkusen next week because of his fifth booking while Barrios, Valdez and Großkreutz ended the match will little injuries which will hopefully be forgotten next Saturday, 6.30 pm. 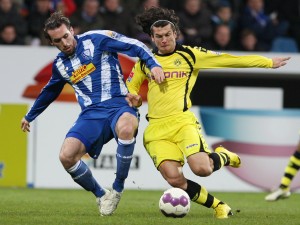 With Leverkusen’s victory over Hamburg, Borussia has conquered the 4th place with Bremen three points away. The next match always is the most important one, but this match could be of a great importance, since it’s one of the bigger matches of the rest of the season, with the match against Bremen being the other. Of course, every match is a big match on the way to Europe, but those are the matches against the bigger opponents which will guide us the way… hopefully to Olmütz, then HSV… perhaps to Liberec… you know the rest. 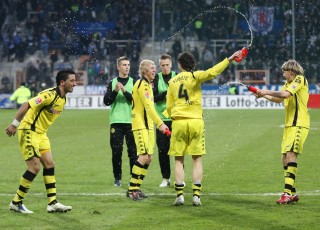