Borussia travels to the far south with new strength 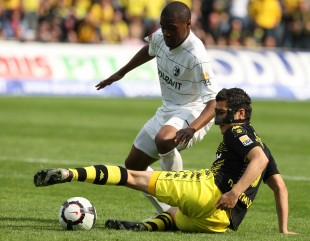 Hello everybody! Unfortunately I am the one who was chosen to write this warm up report today. So you will probably read some bad temper between the lines. Today is Opposite Day.

After the miserable last weeks and the embarrassing performances of our young squad the next insoluble task is almost here. Our Black and Yellows would be wise to underestimate the wretched team from Freiburg. It seems to be a really easy match that should be decided within the first ten minutes.

Seriously, I have to stop with this rubbish I just wrote down.

Borussia Dortmund will travel to the Breisgau area in the far south of Germany with new strength in the squad. Two German internationals have joined Borussia from Sweden. O.k. we´re talking about Marcel Schmelzer and Mario Götze, who are already well known to the BVB-supporters, but now they are proud owners of their first cap and they´ll better show a performance worthy of a German international at Freiburg. But are there any doubts, they will? Hardly so, because if it is one thing these youngsters have shown us so far, then it must be the dedication and greed to win every single match. It might not work out all the time, but this season they showed the quality to finish what they started at almost every game, in Bundesliga that is. Where we have seen problems last season, if an opponent just wants to keep a clean sheet and nothing more, this year HSV was overrun in half 2 and punished for their destructive approach. 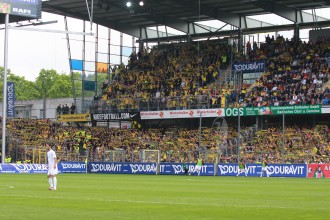 We told you before, there´s a stain to be removed. The last game of season 09/10 was lost at Freiburg, since then all Bundesliga away games have been won. And it is just not tolerable, that a useless club like Freiburg, that should play at least a league or two lower is sitting in 4th position of the Bundesliga table. They try so hard to give themselves an alternative image, maybe not quite the St. Pauli Jolly Roger type of supposed-to-be-rebels but rather of the tree hugging kind, with their solar collectors on the roof of their ugly little stadium. Back in the day their ear ring wearing pedagogue coach Volker Vinke was watching the games from a roofed wicker beach chair. Yeah we´re so different, we´re the open minded university town.

But when you travel to Freiburg as an away supporter you´re not welcomed with open arms or even treated with the tolerance you would expect from alternative tree-huggers. Nope, the only green you´ll see is the uniforms of the police and if you don´t act exactly as planned, you´ll be sent back home. Prepare to leave all your tifo material at home as well: Megaphone - not allowed, large flags - not allowed etc. And finally meet one of the strictest stadium security forces of the league with alcohol tests at entry and the like. All in all a game that nobody will miss once this club will be relegated to a league more appropriate for them.

But the "Breisgau-Brasilians" (wonder where that name came from) are not to be taken lightly this season. Coach Dutt has found a formation that is hard to play for any opponent. Just like Dortmund they try to attack early and destroy the enemy´s build-up and up front they have Cissé, who is on the run of a lifetime at the moment and scores from any opportunity. So let´s hope that our young-guns can fulfil the task once more and let bygone be bygone to focus on the match ahead. Keep Roman Weidenfellers dream alive, lads! 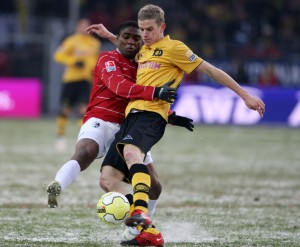 Here is what the coaches Robin Dutt and Jürgen Klopp said about their next match and oppponent:

Robin Dutt about the delevopment of Borussia Dortmund:

„There is no word that could fullfil what's happening there. Out of the hardest time of the club the responsible people work with ongoing quality in every section. To the costs of the other great clubs in Germany they don't seem to cease their run. Even in the football section. There is a huge number of talents that will follow. Also I appreciate my fellow Jürgen Klopp. We passed the coaching course together.“

About the course which he passed as the best:

„To save the honor of Jürgen: At this time he already was a Bundesliga coach because of his irregular presence he wasn't within the circle of the favorites. But there is something giant emerging in Dortmund. A really though task. But we aren't only a dust particle.“

„Last year we recognized that three percent lesser didn't work against Freiburg (Remark by the editorials: 3-1 loss). This time we aren't going to make the same fault again and don't give everything. Our opponent is prepared to plow every part of the pitch. This team hardly makes tactical faults. It will be a thrilling match. In the end the fortune will decide.“