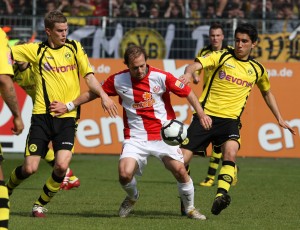 While football fans expected to find Borussia Dortmund in the upper third of the table, Mainz' run is stellar. Going into the season with a small budget and the main goal of not being relegated, they started a run of seven wins in a row. Two weeks ago they suffered their first set back, when Hamburger SV won 1-0 in Mainz' Bruchwegstadion. Nonetheless Thomas Tuchel, Mainz' young and inspiring coach, prepared his team well for the tough away game in Leverkusen last weekend. It was really incredible to see, how they performed there and came back with a 1-0 win. The team from Hessen has its spiritus rector in midfield wizard Lewis Holtby. A delicate topic as Holtby is on loan from Schalke 04. Schalke coach Magath didn't see any use for the talented player. Now Holtby and Mainz top the table, while Magath and Schalke are deep down the table. Adding to Holtby there are promising players like striker Andre Schürrle, who will move to Leverkusen next season, or Adam Szalai from Real Madrid.

Maybe Mainz biggest asset at the moment is not (only) Lewis Holtby but coach Thomas Tuchel. The young gun hit the scene summer 2009 when Jürgen Klopp just left to Dortmund and new coach Jörn Andersen had a short stint only. Tuchel, by then youth coach in Mainz, took over from Andersen. 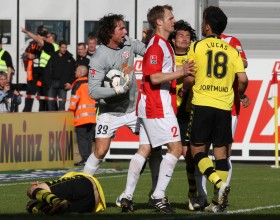 BVB supporters may know Tuchel from another match. At the end of the 2008/09 season Borussia Dortmund U19 youth team had qualified for the German championship final. That BVB team was widely known as the best team that season. They had to play the final in and against Mainz..., whose coach by then was Thomas Tuchel! Tuchel's team was able to neutralize Dortmund's strong offence and in the end Mainz won the championship. So while Mainz didn't have the individuals to succeed, they had a plan to win. And this "match plan" is what Thomas Tuchel stands for. Maybe the media exaggerate a little bit, but still Tuchel's plans for a match work out pretty often. When drawing his concepts he is not afraid of using modern techniques like video assistance systems. By the way the same system Jürgen Klopp is using.

Mainz will probably start without Andre Schürrle in the line-up. Though the striker is a hot prospect, Tuchel very often uses him as his super-sub. Allagui and Hungarian Szalai will be the Mainz offence assisted by afore mentioned Lewis Holtby as attacking midfielder. They are assisted by a row of three midfielders. The flat four is build around Noveski, experienced defender from Macedonia. Goalie Wetklo is still replacing injured Heinz Müller. Borussia Dortmund won't make any changes unless forced by injury. Piszczek is still replacing Owomoyela. Sven Bender, Mario Götze and even Nuri Sahin have all minor inujury problems, but will probably be available.