Viva Dortmund- last minute victories are always the greatest ones 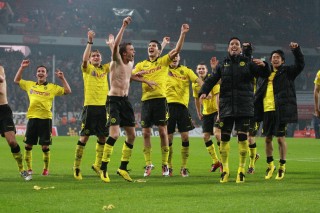 We all remember the game from January, when our Kevin Großkreutz managed to make the goal for the 2:3 in the last minute of the game. Heart attack feelings were what I was experiencing then. Due to the crisis of Cologne and the great start we had, I hoped for a little bit more relaxed three points this time. Sometimes, however, history repeats itself. It should be like that this time. As a result, Dortmund gained the number one in the chart for at least one night.

Kevin Großkreutz cured his flu that had kept him away from the games with the national team, and so Jürgen Klopp was able to present the same team that had won against Bayern München. Götze and Dede were fit again as well and took a seat on the bench.

Time to play some football.

Both teams began quite eager with a lot of running and fighting involved. Due to the fact that it had been raining for quite a while now, it appeared to be rather difficult to play on the ground, which both teams managed quite well though. After only six minutes Lucas Barrios had the first big chance of the game. Kuba did a great sprint on the right side and put a wonderful cross in for Barrios. Unfortunately he did not get to it perfectly and headed the ball slightly over the goal. After that the game continued in a quite exciting way. Only four minutes after Barrios' chance, Lukas Podolski shot the ball on our goal and hit the goal post, the ball fell back into the penalty area and Colognes Clements, who was standing right there , chance was warded off by Weidenfeller. In the 17th minute Lucas Barrios showed that he knew how to hit the goal post as well. The luck that was ours before, was now on Colognes side. Only three minutes later we were finally able to celebrate. Somehow by someone the ball landed in Colognes goal. After Kagawa played a perfect cross for Barrios, he headed the ball into the goal, however, Kubas knee was somehow in the way and the ball dropped to his knee first and then into the goal, so the goal can be counted as a goal by Kuba. It stayed a really great game. Both teams were eager to score goals and Cologne did not show too many sign of being in a crisis. They managed to fight for the ball quite well and played out some good chances in the 28th, 29th and 39th minute of the game. Dortmund on the other hand did not feel like quitting to play football as well and had their chances in the 22nd, 43rd and 44th minute of the game. After all it was a great first half to watch on both sides. The game was fast and time passed by quite quickly. Good signs for a great second half.

Second half of the game 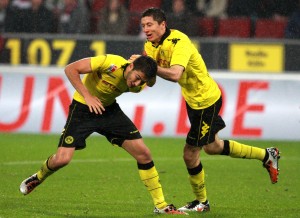 The second half of the game began the same way the first half had ended. Due to the bad weather , wonderful football was difficult to play, however, both teams managed to balance that with a good fight. It took 12 minutes for Cologne to really wake up again and scare Dortmund with a ball that missed the goal only by a few inches. Right after that Großkreutz tried to score another goal for us but missed by a few inches as well. After that it appeared that Cologne grew stronger and more eager to score at least one goal in this game. Thanks to Weidenfeller who kept the goal clean in the 61st minute after a free kick from Colognes Petit and a shot from Lanig in the 67th minute of the game. Shortly after that Kagawa and Barrios left the field and Götze and Lewandowski came in. A brilliant decision as we will find out later. The last minutes promised to be quite nerve wracking and exciting and nothing that someone with a weak heart should go through. But first Lukas Podolski had his moment. In the 82nd minute of the game he shot a dream shot from about 20 meters right onto our goal and it came as it had to come. 1: 1. Cologne was so eager in the past minutes it was somehow only a question of time until they would manage to confuse us to that extent that they can use our mistakes to score for themselves. And they managed. But thank God, sometimes there is still a bit of justice and after Podolski managed to make an even bigger idiot out of himself than he already is by provoking Sahin with a 3:0 gesture (for those who do not know, Podolski plays for the German National team and of course Sahin plays for Turkey- Germany had beaten Turkey 3:0 last weak), Sahin had the perfect answer down his sleeve.

We are in the 91st minute of the game. Dortmund came over the right side of the field, Lewandowski had the eye and realized that Sahin stood offside and played a wonderful pass right into Götzes feet, who played a perfect ball for Sahin who kicked it into the goal. 1:2 for us. AGAIN in the last minute of the game. In your face Podolski. Of course Sahin could not hold himself back from a little provocation as well by sliding and celebrating right in front of Podolski, but hey, that's football. 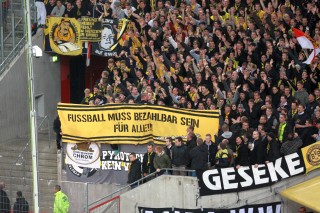 Now, I live in Cologne and obviously I have quite a few friends who are friends of Cologne. And obviously what I got to hear after that game was, that Sahin was an even bigger idiot and that that move was childish and what not. I think this is football. We are all emotional, we suffer, we are happy, let's not make a bigger deal out of it than it is. It was really funny in that moment and every Dortmund fan felt with Sahin because this unbelievable feeling of joy just can't be described.

I can hardly put down in words what this team means to me. And for those who do not quite understand, just look at how they celebrate together after one has made a goal or after a game that was won. It is a TEAM. Maybe the greatest I have ever experienced in my 15 years of love for my BVB.