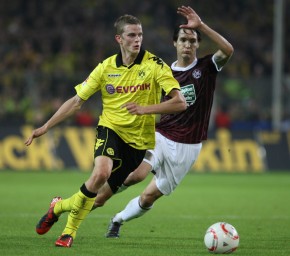 There is only one way Borussia supporters know these days: up! With an incredible 8 wins out of 9 matches, Dortmund marches up the table. The temporary climax of this run is spot 2 in Bundesliga. The last act was an impressive 5-0 against 1. FC Kaiserslautern. Even championship dreams emerge among the black-yellow lads.

Dortmund was backed by an impressive series of 5 consecutive wins in a row, topped by the magnificient 3-1 victory at our arch rivals Sch*lke 04. Really everyone was on a high in the Westphalian metropol. So Jürgen Klopps task was not only to prepare his players for the team from Kaiserslautern but also to calm down emerging euphoria among his players. Not so easy when you just trashed the blue-white team from Gelsenkirchen. Klopp announced after the Sch'lke match that it would be time to start rotating some players. Keeping in mind that Borussia have to play 7 matches in 23 days, this statement makes sense. So young starlet Mario Götze and veteran Owomoyela were left out and Polish internationals Piszczek and Kuba started instead. Apart from that, the „derby heroes" were on the pitch.

1. FC Kaiserslautern had a good start into the season. The freshly promoted team from the Pfalz region lives through its fighting power. Due to lack of money and stars, that is their only way at the moment. And it is really incredible what CEO Stefan Kuntz, a FCK legend, has done with his club during the last years. From a broken second division side into a prospering club that has the whole region behind them. Maybe they don’t have those big names, but players like Lakic and Dick will make their way in football. Compared to the Hoffenheim match, Kaiserslautern coach Marco Kurz didn’t see any need to change his line up. 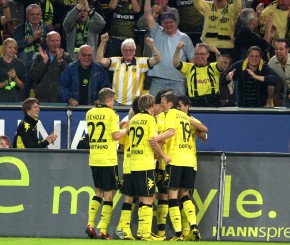 70.100 spectators, about 3.000 from Kaiserslautern, prepared the perfect stage for a magnificient night. And it weren't the black-yellow players who started the show. Kaiserslautern had an early freekick taken by Tiffert. The deflected ball was taken by Lakic with a spectacular bicycle kick. Fortunately he didn't hit the ball – unfortunately he hit Sven Bender's head. Borussia's holding midfielder immediately dropped to the ground and for some seconds it really looked horrible. It took some minutes till Bender was able to return to the pitch. And even then he had problems with his head for another couple of minutes. 5 minutes into the match Lautern had another 2 corner kicks that brought some arousement to Dortmund's box. Another 2 minutes later Borussia's goalie Roman Weidenfeller had to save a low shot by Lakic again. And like this being the wake up call, Barrios had the first approach for Dortmund. His attempt was too high. The match was on a superb level during this period. This was also the time when Sahin started to make this evening his evening. A first sharp pass didn't find Barrios, but be sure, that this wasn't his last try. Meanwhile Sunday's hero Kagawa aimed with a header but missed by centimetres. In minute 21, Lakic had another shot, that was wide. But now it was time for Sahin to enter the stage. In minute 31, he got the ball within Borussia's half of the pitch. Not being attacked, he paced some metres into Kaiserslautern's half and finally played a brilliant sharp pass through Kaiserslautern's defence. The ball found Lucas Barrios up and away, desperately followed by defender Martin Amedick. But really, somehow Amedick was not a threat for Barrios. The Paraguayan national stormed into Kaiserslauterns box and fired a low shot that left goalie Sippel stunning – 1-0 BVB! From this moment on it was only Borussia Dortmund – until the final whistle. After two missed chances by left fullback Schmelzer and Barrios, it needed another action by Nuri Sahin. In minute 38 the Turkish national played a short pass to the left side to Kevin Großkreutz. Großkreutz entered the box and curled the ball direction goal. Sippel tried his best and got his hand on the ball but wasn't able to save – 2-0 BVB! Being in front that early let Dortmund slow down the pace a little bit until referee Fritz ended the first half. 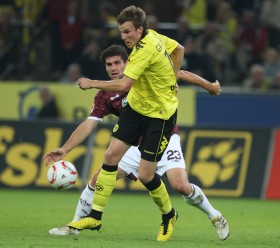 No substitutions were made on both sides. Only 2 minutes into the second half Sven Bender had a first approach for Borussia Dortmund. And it was again Sahin who impressed with supernatural technique when he served Großkreutz in minute 50 – unfortunately this wonderful attempt was denied by Sippel. After one hour, guest coach Marco Kurz made two substitutions. Micanski and Walch should bring new drive to his squad. But it was still Borussia Dortmund only. In minute 65 a free kick taken by Nuri Sahin from 30 metres was missed by Sippel and found Mats Hummels 7 metres in front of the goal. The tall Dortmund defender hadn't any problem to score by head – 3-0 Dortmund! Jürgen Klopp on the other side made also two substitutions. Of course his ambitions weren't to turn tides but to save energy for upcoming matches. So Götze and Lewandowski replaced Kagawa and Großkreutz. And like in Gelsenkirchen it was again „super-sub" Robert Lewandowski who scored. A sharp cut-in from the right side by Kuba was left untouched by Barrios and Polish national player Lewandowski scored easily – 4-0 Dortmund! Of course the match was decided by now. Nonetheless Borussia Dortmund didn't stop their magnificient style of play. In the dying minutes Pisczcek served Barrios who scored his second goal of the evening – 5-0 BVB! And that was really the last highlight of this wonderful night of Bundesliga football! 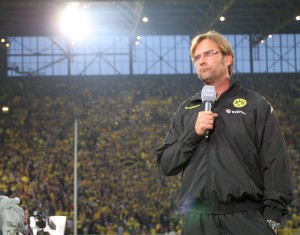 A stellar evening with a Dortmund team that needed about 15 minutes to get into the match. But from that moment on, they celebrated football, fired by „spiritus rector" Nuri Sahin. The young Turkish national player made one of his best matches in black and yellow. With this style of play Borussia Dortmund has every chance to stay in that region of the table. But of course the next tasks won't be easy. This coming Saturday our boys have to travel to Hamburg, where they face promoted FC St. Pauli.

Voices:
Jürgen Klopp: „Would have anyone told us before the season, that we start with 12 points out of 5 matches, we would have laughed at him. 12 points are a dream that the team earned for themselves. Now we face FC St. Pauli, a tough match."

Marco Kurz: "We made many unforced errors that we have to analyze. During the second half, we were lost. Everyone knew how difficult the task here in Dortmund would be. But I won't say that the team refused to perform. Borussia used their euphoria to take advantage of our mistakes."