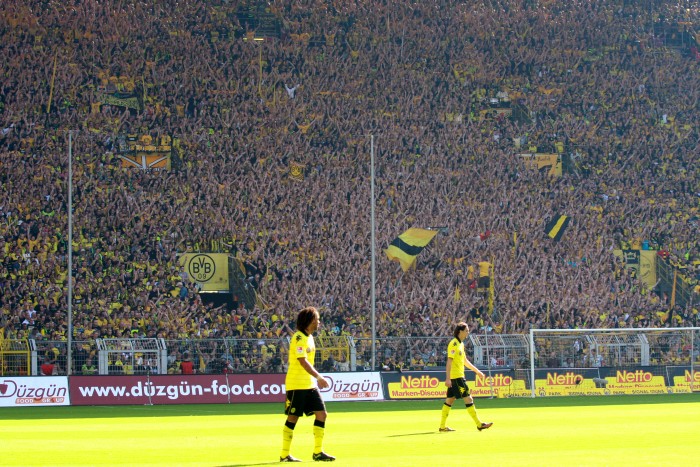 Derek, our world cup correspondent from Philadelphia payed the hometown of his favourite "soccer" team a visit this weekend. Obviously that helped a lot in the 2:0 win over Wolfsburg. If you have fans, travelling this far to see Borussia play, that should be motivation enough to perform at your best. And that´s what the team did for most of Derek´s first match at the Westfalenstadion.

Derek watched the match from the southwest corner of the stadium sporting his new boycott shirt. So he had a good view on the pitch but also at the supporters on the Südtribüne, most of them wearing the same shirt and turning the terrace into a bright yellow wall. Both goals were scored towards the south end plus Owomoyela´s cross bar hammer so Derek was lucky enough to see most of the action up close.

We gave him a warm Westfalian welcome on Friday and introduced him and the Scots you´ve already seen to the local dice game "Schocken". After the match he got involved in some Dortmund style victory celebration which maybe was even more shocking than the dice game at times.

Before the game, Derek was kind enough to answer our questions on his view of European football and how he came across the mighty BVB. There´s a million ways to become a Borusse. Here´s how it can happen more than 6.000 km from Dortmund.