Return to base - Borussia vs VFL Wolfsburg 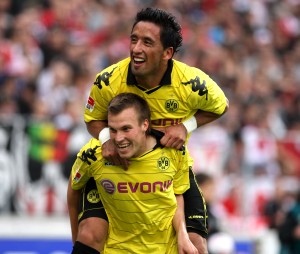 Return to base? A strange headline?

Maybe! But after all these statements, comments and nearly endless discussions about Borussia's fans boycotting the match in Sch...e it's high time not to forget the incidents on the green! But before we take a look on Saturday, here's one last remark for today about our boycott of the match next week in Gelsenkirchen:

The boycott is definitely not a sanction against Sch...e! Also Sch...e supporters have to pay higher prices for the derby. It's rather the first sign from fans to the public not to accept increasing ticket prices from year to year. Some might agree to the boycott, others not, but one thing is for sure: If the development of increasing ticket prices will continue, football is in danger to move away from its real fans. And the best way for the real fans to get attention for their concerns is to boycott a match with highest significance in the Bundesliga – the derby! 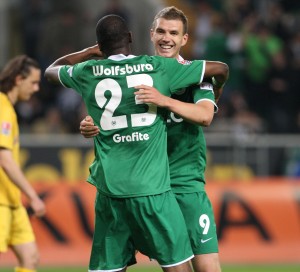 To engage Steve McClaren, England's former national coach as successor for Armin Veh was a novelty for the Bundesliga. McClaren is the first English coach in the Bundesliga and won one year before as coach of Twente Enschede the championship in the Netherlands. His assistant is not unknown in Germany: Pierre Littbarski, German international, world cup winner in 1990.
Wolfsburg manager Dieter Hoeneß, brother of Bayern's president Dieter Hoeneß invested a lot of money into the team. In total 39 million Euros which means top in the league. This amount shows the financial power of main sponsor Volkswagen, on the other hand we must consider that Wolfsburg sold players for more than 20 million Euros including 9 millions for Zvjezdan Misimovic, now on the payroll of Galatasaray Istanbul. Most important and most spectacular transfer of Wolfsburg was without a doubt Diego from Juventus Turin. We all know him as successful striker for Werder Bremen. Wolfsburg invested 15 million to get Diego into the team, the most expensive transfer in the league. Further popular new Wolfsburg players are Croatian striker Mario Mandzukic, Danish defender Simon Kjaer and German international Arne Friedrich from Hertha BSC. Kjaer is struggling for better shape after two unlucky matches and after a surgery Friedrich will be longer injured. In addition New German international Sascha Riether is doubtful for Saturday due to a hardening in the thigh since the match against Azerbaijan on Tuesday in Cologne. But all in all Wolfsburg's line up for the match in Dortmund will be something like a "who is who" in football: Beside the new players mentioned above Edin Dzeko and Grafite (If McClaren will let him play) are best examples for strikers with highest efficiency. Three goals of Edin Dzeko after two Bundesliga matches should be warning enough for Borussia's defensive. 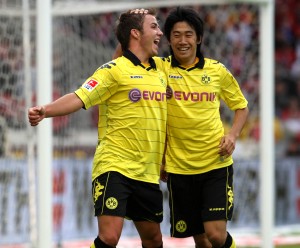 And now let's talk about Borussia, currenly in position 8 with one defeat and one win! First good news are that with exception of Mohamed Zidan and Florian Kringe all our kickers are able to play! Dede started with training again and internationals Barrios (1 goal for Paguay against China), Kagawa, Lewandowski (1 goal for Poland against Australia), Piszczek and Kuba returned without injuries. Dortmund's press reported that Nuri Sahin is currently "breathing fire and brimstone" that he could only watch the Turkey matches from a tribune seat. Sad for him but a higly motivated and successful playing Nuri against Wollfsburg should be the best argument to convince Turkish coach Guus Hiddink of Nuri's excellent quality as midfielder. When it turned out that Diego (ankle problems) will be able to play in Dortmund, the main question is: "who will be responsible for combating Diego?" During the last matches Tinga solved this task greatly. Now Tinga moved back to Brazil but Jürgen Klopp doesn't see a big problem regarding Diego. In Borussia's press conference he explained that the two defensive midfielders together with the two central defenders will keep an eye on Diego and also Dzeko. No easy job for them and probably the key to avoid Wolfsburg's first points in the league.
For friends of statistics some facts of Borussia's previous matches against Wolfsburg: 8 wins, 3 draws and 2 defeats, but the last win in our Westfalenstadion dates back to 2006, 1:0, scorer Ebi Smolarek. Long time ago and time to improve this balance!

Let's close this warm up report with a quotation of Wolfsburg's coach McClaren: "...I've heard about the atmosphere in Dortmund. I think it's known as the (yellow) wall. On Saturday we won't just be playing against a team but also against a bunch of amazing fans. ..."

A good description Mr. McClaren! Let's show him that he is right!