Ehab - from Baghdad to Dortmund 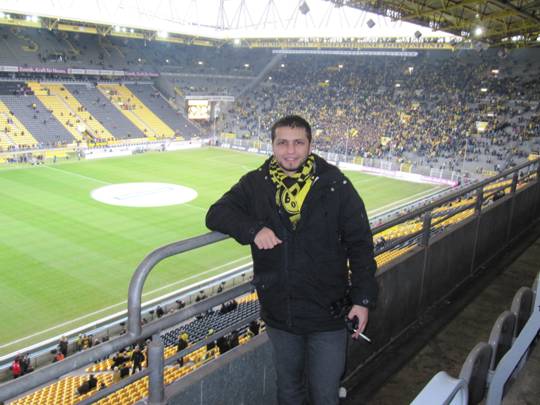 Can people living in Germany really understand the time and effort people invest to see the mighty Borussia play? Today we would like to present you a story from Ehab Al Hajou, who lives thousands of miles away from Dortmund. He has been following Borussia ever since 1996. Ehab is from Iraq and only ten years after becoming a fan of Dortmund had the chance to visit Dortmund for the first time. If you want to tell us your story, our competition is on for another week. A schwatzgelb-Sweater or one of two schwatzgelb-T-Shirts might be waiting for you.

In order to state my story with BVB, I have to be fair and explain why I chose BVB from all the clubs around the world....

Since I was a kid, and that is since I was 14 years old, I had this thing towards Germany, for some reasons, I had this passion towards anything related to Germany, sport, cars, athletes etc, and in 1994 during the world cup in USA, I was officially a Deutschland fan especially that Germany was playing as the holder of the championship and I was passionate to see an amazing pace during the championship, but unfortunately we all know what happened later in Bulgaria's match....I can't forget how much I cried that day and my parents...well, they were laughing at me. 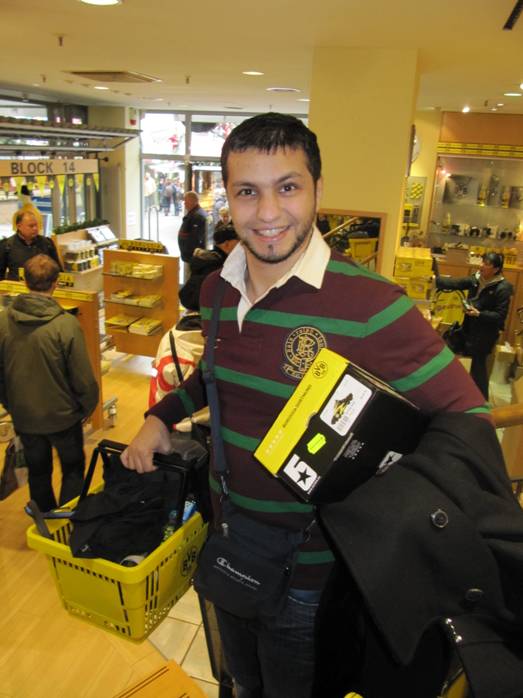 At that moment, I decided to be a German fan, and that will also include a German team that plays within the German league, now I won't hide the fact that I, just like most of the Iraqi's, had my eyes on Bayer Munich, since they are pretty famous in Iraq. But while I was searching and searching, UEFA champions league hit the fans, and I saw this yellow black look alike bee team playing and stinging all the big shot teams one after another...I was shocked and asked about this team and someone told me this is a German team, and it's called Borussia Dortmund...... I CAN NOT TELL YOU HOW OVERWHELMED I WAS... the happiness just rushed in my vain and I knew at that moment that this team is the answer for my need - to be a supporter of a German team. The funny thing, which might shock whoever is reading this, is that I was raised in Italy, and lived there for almost 10 years, however, for some mysterious reasons, I never liked the Italian football, saw it very slow and extremely defensive, and that lead me to talk about the champions league finals 1997 when I was watching it with my brother who happened to be a Juventus Fan, I will be frank and say that I only caught up with the match when Dortmund was already in a lead 2-1, then my all time beloved Lars Ricken came in, this young 18 years old kid had this look on his face that made me feel that he will one day be a big name in the history of the club, and from 1 touch from the great Andreas Möller passes an amazing ball to that youngster Ricken, who from 1 touch as well scores one of the most magnificent goals in the history of champions league, I can't explain the joy that rushed me and how my brother felt so down and sad, I was jumping all over the place and screaming "my yellow team won, my Yellow team won", hahaha. 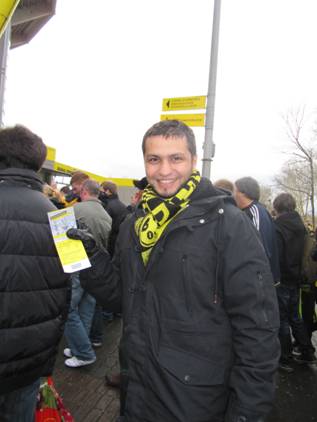 That's when I started to follow up with the team, the Bundesliga matches, the European matches, the transfer rumors, who's in, who's out, Kehl is wanted by BVB but Bayern wants him too, Lehman moves to Dortmund, Dortmund seals the biggest transfer deal in the history of Germany by signing Amoroso, etc, till 2003 when the war happened, well, that was terrible in all aspects so as well on football, all news were cut off on BVB and didn't know what's going on, are we playing in Europe, and what's up with all the fuzz of having lot of debits, some was saying the club is going bankruptcy, some was saying it will be sold, during all those rumors I was caught in between politics and the anger of mankind and the ugliness of wars. Didn't know anything until the war was over, and still the aftermath of the war was uglier than the war itself, so had to move out and resided in Dubai, that's when I knew the shocking news on the team, the team is going down financially and the situation doesn't look promising, I was very, very sad and depressed seeing the situation reaching to that point, but I can swear to anything, I had this feeling that yes, Dortmund is sick, but it will never die, and will survive and will get back on its feet again and kept on having faith, didn't miss 1 match and shared all the tears of joy and happiness as well as sadness that Dortmund fans were experiencing only that I am thousands miles away from Westfalen, but yet I never felt like an alien.

Till 2006, when my beloved sister who works in Emirates Airline told me, Ehab, do you want to go to Germany and precisely to Dortmund to watch the world cup !!!!!!!!!!!!!!!!!!, now that was going to make me faint, it was like a dream come true, nah, dreams can't be as wild as, going to Germany, Watching the Nationalmannschaft, and that will be in Dortmund, in the Westfalen Stadium, isn't that too much for a heart to handle??? 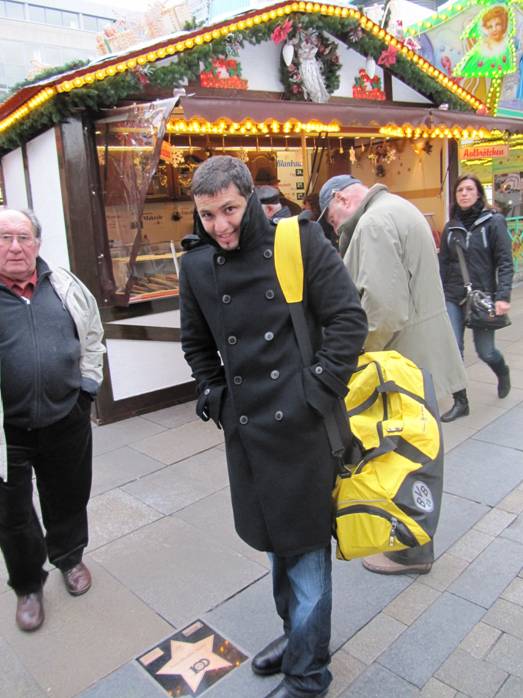 I immediately packed up my stuff, took a plane and went to Germany, thank god I have an Iraqi/German friend who lives in Germany in Kassel who was very helpful to guide me around since my German language is, well, Zero, unfortunately my friend couldn't make it with me to Dortmund so I had to take the train by myself to my beloved city, thinking about it now makes me wonder how insane and crazy I was, going to a city that I don't know anyone in it, don't speak their language, and yet I didn't reserve any hotel room. But who cares at that moment, I AM GOING TO DORTMUND.........

The moment I reached Dortmund, I had tears in my eyes, is this real, I am in Dortmund, and I'm going actually to walk in the city of my beloved team??? To short cut the story, I went around half of the city walking, not knowing where I was heading, but I was enjoying the scenes, the amazing weather, the beautiful smell of the air, the amazing yellow and black colors that covers the city, the beautiful yellow wall that held an amazing picture of Dortmund's fans saying hello in all languages right after exiting the Bahnhoff, then I walked my way to the stadium, gosh, the moment I saw the stadium terrace poles from far away I stopped and kept on looking at them, wondering if this is true, or it's just another dream of me being there!!! Anyway, Germany was playing against Poland, the polish put some good performance to be honest and they were too hard to infiltrate, until the moment when Odonkor passed that 90th minute to Oliver Neuville and scored the only of the match and Germany won, I couldn't believe it cause I was so stress that I have travelled half way the planet and I won't be able to share the joy of Germany winning, but Neuville refused to let me leave Germany sad, and scored that goal were I jumped around the stadium like crazy, German fans were around me jumping with me, and talking to me, I couldn't understand one word but I was just laughing, hahah. 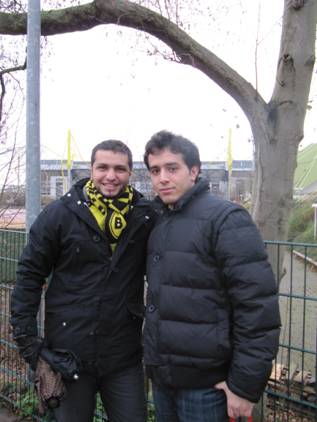 I went back to Dubai, but guess what, being in Dortmund is just as addictive as any drug, I couldn't help myself but to go again, and again, and again, cause watch BVB playing is another different flavor, a better flavor, I watched Dortmund playing Real Madrid in their 100 years Anniversary, and saw BVB vs. Stuttgart match, and last but not least BVB vs. Nurnberg match. And hopefully I'm planning to visit Dortmund again in November, specifically on 13th of November when BVB is playing HSV, I will be hopefully going this time with couple of my friends, who I recruited them, oh I forgot to mention that I never miss a chance to create an awareness on Dortmund here in the Arab world, let me tell you that Germany got some good amount of fans, and Dortmund's base is getting larger and larger.
Well, that's my story with BVB, hope it wasn't much of a boring story, but I would like to thank schwatzgelb.com for giving me the opportunity and the chance to share my story with you all, and to be honest I was a bet hesitate of writing it, but I was encouraged and motivated by schwatzgelb.com to write it, thank you again.