With Borussia in Azerbaijan - Adventures at the Caspian Sea 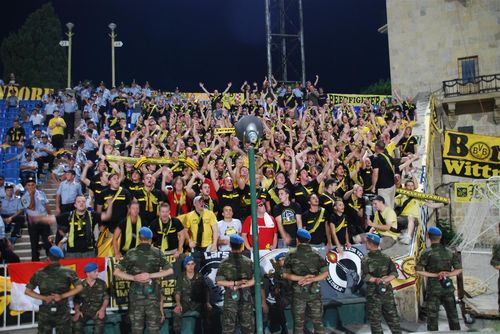 As the draw at Nyon came up with the Opponent „FK Qarabag Agdam“ instead of AIK Stockholm (these were the last 2 teams in our pot), the great confusion how to get there began. A first search results flight-costs of ca. 400 €, but difficulties to get a Visa in time, and very expensive bookable hotels from Germany. So we decided to take the one-day Fan-Flight, which was organised by The Unity and Away Sups Werdohl for 558 €.
After the first game I read that there were heavy incidents after the game AIK Stockholm – Levski Sofia, so our draw was not the worst I think...

The flight from Cologne to Baku with a czech airline was unspectacular, the only deficiency was that there was only one good night-beer per person. When we approached to land at Baku, the morning-dawn allowed to see the first impressions of Azerbaijan: dry river-valleys and a nearly uninhabited landscape from the Caucasian-mountains as far to the Caspian coast. But as soon as the air-plane came closer to Baku, the view changed abruptly: a new-looking 6-track Highway following the coast and oil-industry everywhere. And the results of the booming oil industry were already viewable from the sky: dark lakes with oily shining „water“, salted water-holes and even the Caspian sea seems to be a big oil lagune.

Landing and transport to the airport was normally, but then the local authorities came to their performance of the day: Passport-stamping and taking a photo (for the 1400 cameras of Baku Monitoring system) went fast, but then everyone had to get their visa. And there was only one visa-officer , who worked so slowly (most of his „work“ was smoking and phoning), that it took more then 4 hours in total until the last entrance to Azerbaijan was allowed (I was one of the last persons...), But o.k., it´s not western Europe.
After leaving the airport we hoped that the oil-smell in the air would become less, but this aroma didn´t get more delicious the whole stay.
The way from Baku Airport to Centre/Sea esplanade took us by a brand new highway with accurate plants and trees around it, also most of the bigger buildings in Baku are totally fresh or still under construction. The booming oil-market makes this possible. It would be interesting to visit another Azeri city or the back province to see the contrast. 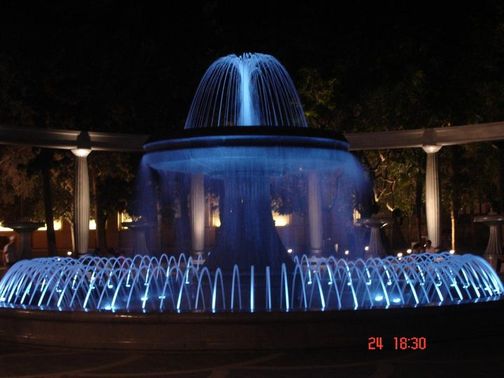 When we arrived at „Fountain Square“ nearby the presidents palace, most of the Supporters went to the old town of Baku to see the tourist attractions. But for me it was a bit too warm, so I decided to visit a shadowy beer-garden directly by the sea-esplanade. Some other BVB-Supporters had the same idea so it was a nice and fun time there with fair prices and no rip-off. At the next beer-garden 100 m from ours some other Supporters felt not so lucky, the beer price at the menu said 2 Manats (1 Manat=1 Euro), but the waiter wanted to cash 5 Manats for it. The same old game...
Directly at the back of our chosen place, there was a little Luna Park, so some Supporters decided to try the swingboat-carousel. Supporter Stefan (one with the most imposing volume of a body) later told me, that it was like „Azeri Roulette“, because of the broken safety-loop. But everyone survived without constant damages.
Shortly before the departure to the stadium, most Supporters took assembled for a group-photo in Front of the Fountains at the main place. This also attracted many local people to take a picture as well. 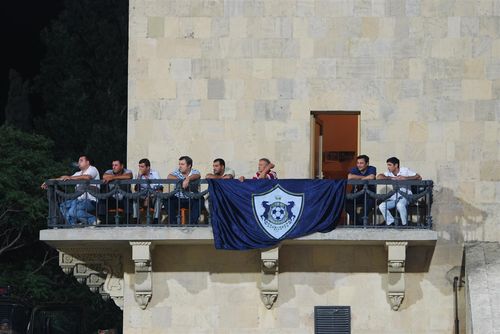 The way to the stadium was driven by bus, most Supportes bought a very expensive ticket for 30 Manats inside the bus. At the stadium, tickets were sold for 1-3 Manats regular, and 10 Manats VIP including a buffet.
But we got our buffet at a little beer-garden backwards to the main stand, and nearly everyone who ate from the local grill had a gastric disease the days after....

300 BVB-Supporters were located in a special away sector at the side of the Stadium, they celebrated a nice choreography at the beginning and a great atmosphere during the whole game. The away sector was all around secured by policemen and soldiers, but it was no problem to leave and get something to drink whenever we wanted. Totally there were more then 2000 soldiers and policemen in the stadium-area.
The game was started very offensively by Agdam, but after a few minutes they reached their limits, so it became a bit boring, because Borussia didn´t do more than necessary. But when Lucas Barrios scored in the last minute, it was a perfect end for a nice away-support. After the game the whole team including the coach and CEO Aki Watzke celebrated the qualifying for the Euro-League in front of the away sector, so everyone left happy. At the parking place first we had to deal with group of ca. 100 local kids and youths (I calmed them down by giving an old BVB-Cap to the largest of them), and then the buses took us directly to the airport.
On the way from stadium to airport, I chose a bus driven by a local kamikaze, at the entrance of the airport he drove directly through the barrier which was totally broken, but everyone reached the airport unwounded... 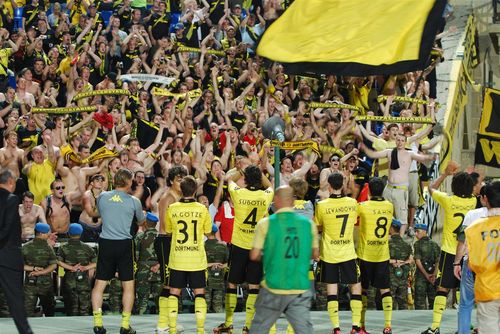 The procedure of departure was nearly the same longevity as before, and some „officials“ tried to take away a shirt, and I missed my purse after having a little sleep on an airport bench, but who cares.
The flight and the landing back to Cologne was a little bit rude, but after coming home everyone was sure that this trip was worth every lost cent, purse, and nerve.