Where are they now: René Tretschok 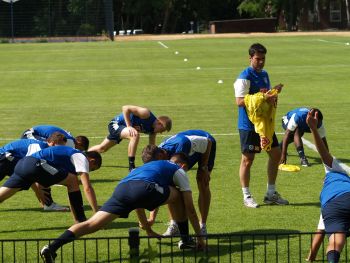 Over the years we have seen hundreds of players come and go. Some of them were soon forgotten, others will stay in our club history forever. Here is our second part of our “Where are they now” series. On the other side of the phone line, sitting in his home close to Potsdam: René Tretschok, another member of 1997’s Champions League winning side. He today coaches Hertha Berlin’s U19 team.

“That goal against Manchester is still on the mind of many people”, says René Tretschok looking back on his most important goal ever. A goal that opened the door to Borussia’s Champions League win against Juve. Tretschok decided the first leg of the half final with a stunning goal from 20 meters. The all-rounder on the left had taken the ball from Paulo Sousa and hammered it into the top left of the net. “The match could have gone either way. Manchester hit the post twice and Martin Kree saved on the line once. It was up and down throughout the game. We did not create too many chances and the goal was very important. For this team, for this club we wanted to create the best starting position for our away match at Old Trafford. It couldn’t have been any better, scoring in front of the Südtribüne”.

“Borussia is the club where I had my most successful years as a pro”, says the 41 year old Tretschok today. Spot on. Borussia signed Tretschok from Hallescher FC, where he had spent the formative years of his career, in 1992. After one year in Dortmund he was loaned out to then second division team of Tennis Borussia Berlin. He came back to Dortmund in 1994 and played an important part in the following Meisterschaften and the crowing in 1997. “I do not have a lot of contact to the players from back then. But that’s normal if you don’t live around there. I came down to Dortmund for the 100 year celebration last December. Funny enough Steffen Freund and Jörg Heinrich live in my neighborhood. But even Steffen, who lives 200 meters away, I have not seen in four months. That’s a shame, but we all have our daily routine.” 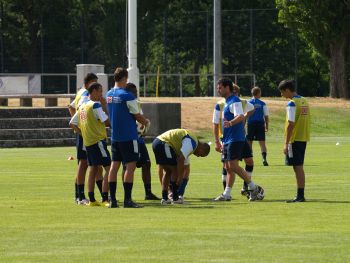 Tretschoks daily routine takes him out of Potsdam and into Berlin every day. He coaches Hertha’s Under 19. With Marco Djuricin and Nico Schulz, two of his boys have made it into the first team already. Djuricin scored a brace against Oberhausen in Hertha’s first second league match last week. “The cold days will come, there will be rain and muddy pitches, there will be pressure to perform and there will be pressure from the media. A 17 year old needs to be ready to face all of this. Playing U19 means no media interest, no TV coverage, it’s easier to develop in this atmosphere. Playing for a Bundesliga team or a second league means daily news coverage, and there is no way for you to hide and take a rest. They have to be ready for this. I prepare them for those situations. But if Marco can stand this pressure, he has every chance of becoming a Bundesliga player”, says Tretschok and continues “of course it is easier to start in the second league. But it is also good to see the likes of Mario Götze thrown into the Bundesliga. He is hugely talented and could go a long way”. Of course Media coverage has changed since the 90s but as Tretschok states “most of the media know how far they can go these days and the clubs are professional to know when to take the young players out of the fireline”

One of the ongoing discussions in German football these days is whether to include the second teams of Pro clubs into the lower leagues three and four. There are many arguments against and many for having those teams included. A lot of the traditional teams like Dynamo Dresden, Rot Weiß Essen, Preußen Münster and FC Magdeburg to name a few face huge financial difficulties, with some of them already being in administration. The problems are partly down to a lack of interest in seeing second teams play. “It is a huge difference whether Dynamo Dresden plays FC Magdeburg in front of 20.000 people or if Dresden travels to Bremen II to play in front of 150 fans. We have to talk about economic efficiency here. I’d rather see all the second teams play each other and maybe build an own league system for them and make way for traditional teams to play in the third or fourth league, which would mean more TV money for them”. One of the arguments for the second teams is that young players need real competition against old warhorses and witty defenders. “That’s right” says Tretschok “but then please hand more TV money to the other teams. It is such a difference when they play against second teams. They play at home and maybe have 300 or 400 fans in the stadium whereas teams like Braunschweig or Dresden have an average of 10.000.”

Problems Tretschok thinks about a lot. He spent his last years as a footballer with Potsdam side SV Babelsberg, an escalator team between the third (the first pro league in German football) and the fourth league. After a short stint with his home town club of Grün-Weiß Wolfen he started to work for Hertha again, the team he spent most of his time after Borussia with. Tretschok left Dortmund right after the Champions League win in 1997 and played for FC Köln for one season. Köln got relegated and Tretschok signed with Hertha. “It was a sullen move at that time, but Michael Meier tried to corner me”, says Tretschok about why he left Dortmund right after the big triumph “Hitzfeld got his new job as Sports Director in Dortmund, which he had told me about before the final. He and Gerd Niebaum both had told me that they plan long term with me. Niebaum even claimed that a player like me would be part of this club for all of his life. But Michael Meier somehow saw it different, and I was really irritated when negotiating my new contract. I was disturbed how Meier treated me and left for Cologne. I still hold that against Meier. I was a player that was easy to handle, and you do not find a lot of these players who are dead important for a club. Really, I would have never thought I’d leave Borussia, still it happened. It was terrible to see Borussia struggling after that, even from afar. I knew the club was in big trouble but I also knew that clubs like Borussia are too big to die. Dortmund has 600.000 inhabitants and they fill a 80.000 capacity every fortnight. There is something about tradition which you cannot take away from football. Borussia is part of that.” 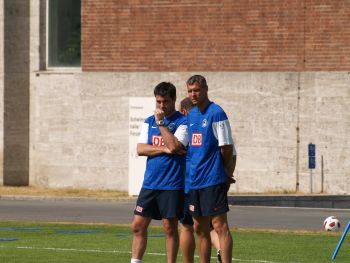 Also part of the long Bundesliga tradition is his current club Hertha BSC who suffered relegation last year. One of the biggest upsets in Bundesliga history falling all the way from the Europa League to Paderborn. But every fall has its chances. “I work closely with Markus Babbel, as mentioned earlier I have already given him Nico Schulz and Marco Djuricin. I will not see them around my team anytime soon. They might come back for the big games but even when they will not be in the first teams squad, they’ll play the reserves. We are all coaches and we not only want to shape the players but also want to have them compete in league. That is a big part of my job. We will not only play to train the young kids but we want to establish a mentality that allows them to compete on the highest level. It’s not just for fun. We want to win as many matches as possible, even with our U19 team.”

Tretschok has trained under Germany’s most successful coach, Ottmar Hitzfeld and besides him Paulo Sousa, Paul Lambert, Heiko Herrlich, Matthias Sammer picked up that job at some point but “if you have a look around and see how many ex-players have turned coach. Nothing to write home about. Not a lot have success however. Everyone will at some stage try out this job. But it is a huge difference all of a sudden being in charge of a group of 24/25 players, if it’s in a youth academy or in Bundesliga. Of course, Ottmar was amazing as a coach. We were able to see how he handled success but we were also able to witness the distress and how his health dangled on a string, how he bottled up all the stress with his do-or-die mentality. All of this can also put you off the idea of taking on that job”

Back in 1997 Hitzfeld had to make a few decisions after Borussia had beaten Manchester 2-0 on aggregate. Matthias Sammer came back from yet another injury right before the Champions League final. Of course, he was guaranteed a place on the team that went on to beat Juventus 3-1. “Ottmar recently said in an interview that the toughest decision he had to make in his entire career was to decide whom to leave out of the squad for that final – Wolfgang Feiersinger or me. He decided against Wolfgang chose the offensive option with me. That of course says a lot about the quality we had in this team. And that was our biggest plus. I always say I have never played for Germany but I have played nearly 100 matches for Borussia Dortmund, which basically was a World XI. Looking back it was a visionary team. Stefan Klos in goal, Julio Cesar, Matthias Sammer and Jürgen Kohler forming the defensive line. On the right wing Stefan Reuter, Jörg Heinrich his counterpart on the left and you’d have the likes of Andy Möller, Steffen Freund, Paul Lambert and Paulo Sousa in center midfield. Upfront Kalle Riedle and Chappi, I could go on and on. That team was insane. And then we had this stadium. I would walk out of the cabins an hour before the match, take a glance to the left where the Südtribüne is located and really did not need to warm up. And then you saw the opponents walk out and stare to the left and you knew, if you start putting pressure on them early on they’d never stand a chance in Dortmund. And that’s what the club is all about. The fans and the Südtribüne. The Times was right when they made it the best stadium in the world a few years ago.” 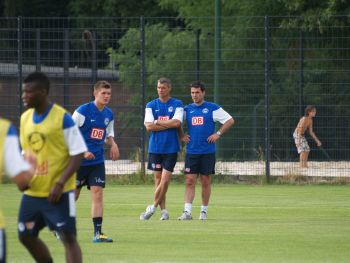 René Tretschok is part of that tradition he talks about. His goal against Manchester paved the way to Munich. His goal against Manchester was also widely discussed. If you look at the pictures 13 years later you see the great Paulo Sousa turning away angrily. “There was big fuzz about this later on but Paulo was the first to congratulate me. Games like this are decided by an act of will. Two teams on the highest level, and if someone feels he can decide it, he needs to take the risk and try it. Those are the moments football is all about. You cannot take the ball to the touchline in those games. It’s always gonna be a free-kick, a set piece or on that day a goal into the top corner”. It was one of the most important goals in Borussia’s recent club history, the goal was scored by René Tretschok.