Welcome back on Board Skipper

As the decisive weeks of the season are approaching, it is good to know, that one of the experien 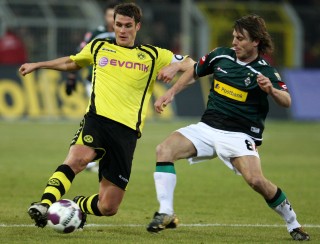 ced cornerstones of our team is back on board. Yes, our skipper Sebastian Kehl has finally recovered, after what seemed to be an endless injury. Many BVB supporters even had their doubts, whether it would be possible for skip Kehl to ever regain his match fitness, much less was he expected to return to the pitch this season. Too often the high hopes for his return have been disappointed in the past.

To understand the background of these doubts, one has to take a look at Kehl´s medical history. During his career he has been thrown back by serious injuries more than once. And often the time to recover took much longer than initially expected. Sebastian Kehl joined the BVB in winter 01/02 from SC Freiburg for €3.8m. The transfer was accompanied by much lament from Munich, as the Buyern expected to sign the rising star and fresh German International, who had already agreed to join them and was paid a signing fee. But under the influence of his friend, BVB defender Christoph Metzelder he decided to move to Dortmund and paid the money back to an astonished Sausage-Uli Hoeness. Kehl was part of the team, that managed to overtake Leverkusen, who lead us by 5 points three matchdays before the end of the season, to win our last Championship so far. Kehl and Dede are the only players in our current squad, who already know the magnificent experience, to win a league title in the football enthusiastic town of Dortmund.

Sebastian Kehl´s history of severe injuries started, ironically enough in Munich in the first match of Bundesliga season 06/07, when he was attacked brutally by Buyern defender Hasan Salihamidzic with a sliding tackling. Salihamidzic clearly intended to harm his opponent, as he attacked Kehl with his feet lifted up and slashed Kehl´s knee with his cleats. Kehl suffered a severe flesh wound, which was filled with a lot of dirt, to add to the damage. Interesting enough ref Knut Kircher did not even feel the need to book the Bosnian defender. Just another example of what is called the Buyern Bonus in Bundesliga. He was expected, to be back within four weeks, but it took Kehl half a year, to return to the field after this horrible foul. Even after his return the problems with his knee continued and he only played five more games that season. But the wound continued to inflame again and again, so in season 07/08 Kehl was still suffering the consequences of Salihamidzic´s brutality. After the first match of the season he was out for three more months, with problems caused by the scar tissue of his knee wound, which were rubbing against each other and causing major pain. Totally he was only able to take part in 14 league fixtures that season and because an operation apparently could not help, it was doubtful, whether his knee would allow him, to play a full season ever again. 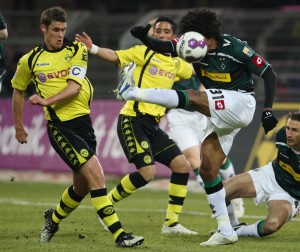 But in summer 2008 Kehl finally announced, that he fully recovered from his knee injury. It will be a source of minor pain for a lifetime but should not constrain his match fitness. He was nominated as Team Captain by the newly arrived coach Klopp as successor of Christian Wörns and seemed to be destined, to play a leading role in the young BVB squad. And apart from one setback, which costed him the matches 14-18 of the season, he was able to live up to the expectations. Kehl played a major role in the seven game winning streak, which brought us close to the much desired qualification for the European Cup. It has to be mentioned though, that Sebastian was 90 minutes on the pitch in Mönchengladbach, when the chance to qualify was easily given away with a 1:1 draw. At the end of the season Kehl admitted, that he had been playing with a double inguinal hernia. He was operated two days after the last match and due to be fit for the season preparation boot camp. But it turned out, that he was far from full fitness, when the camp started, as he could not take part in most of the team training sessions, due to problems with the adductors, caused by the surgery. But Kehl was optimistic, “the surgery went great and minor problems are to be expected”, he stated after the first week of training and his plan was, to return to complete team training for the final preparation boot camp. But these hopes were far from being fulfilled. Whenever he tried to increase training intensity, the pain in the operated groin returned.

First the BVB medical staff tried to treat Kehl conservatively, but when taking it easier did not improve his condition, Sebastian had to undergo surgery again. A half year after his first operation inflamed scar tissue was removed. His return was forecast for February, but at this point hardly anybody believed, that our skipper would be able to help the team this season. Many gloomy predictions circulated around the Westfalenstadion, that Kehl´s body was not fit enough for professional football anymore and one has to concede, that not every sportsman could come back successfully, after suffering two severe injuries like Kehl. 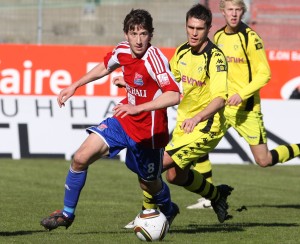 But coach Klopp insisted, that Kehl would recover completely and as his knee injury was caused by Salihamidzic´s foul and the groin injury was in no way connected to the previous damage, Sebastian can not really be called prone to injuries. As Kehl is a highly ambitious player, he was used to work really hard for a speedy recovery, which made his groin injury especially malicious, because setbacks occurred, whenever he pushed too hard. So his patience was put to the test once again. In the winter break Kehl spent two weeks at his own expense at Fitness-Guru Marc Verstegen´s “Home Depot Centre” in Los Angeles to work intensively on his endurance and flexibility.

After playing in some friendlies and the 1:1 draw of our reserve at Unterhaching, Kehl made a surprise 5 minute comeback in the derby at Shitechurch but could not prevent the defeat. But he was able to show his regained confidence in his physical fitness, when he threw himself into some spectacular tacklings. It seems, as if he returned just in time, because his first-rate substitute Sven Bender, who has done such a formidable job replacing Kehl, that it was questionable if the skip would regain his place in the starting line-up, has had knee problems since the winter break and had to pause for at least two weeks after the derby. So it was a great relief for coach Klopp that Kehl was ready to start against Mönchengladbach. It is a funny footnote that Kehl made his comeback to Borussias starting line-up after 287 days against the same opponent, against which he had played his last full match. On his return the skipper played, as if he had never been absent, aggressively conquering balls and spreading them wisely. He was sought by his team-mates and acted dominantly directing them. The timing for his comeback could hardly have been better though, because the so called Pony-Eleven from the Lower Rhine proved to be an opponent as harmless as you can wish for. After the match Kehl admitted for the first time, that he had his own doubts, if he could continue his professional football career:”From time to time there were question marks, but it is a big satisfaction, that I could show all disbelievers, I made it”. 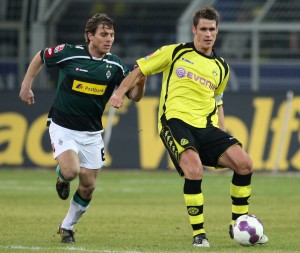 It will be an exciting question, if Klopp finds a place for both Kehl and Bender, when the latter returns, or if he doesn´t, which one of them will start. But Kehl is not only important as player, but also as the team-leader, who gives the commands on the pitch and also acts as team-speaker towards the press. So the much talented Bender might have to wait his turn. Another interesting question is, if Nuri Sahin, who in the absence of Kehl took over the leading position, will continue to grow alongside the dominant Kehl or if the young Turk might be intimidated by Kehl´s claim for leadership. In the last couple of weeks, Nuri seemed to have lost track a little. He still played well overall, but was not as dominant, as he was for most of the first half of the season. So maybe it will help him, to share the spotlight with the more experienced Kehl.

But for now it is good to know the skipper back on board and one can only hope that his times of suffering have finally come to an end. The young-guns need their captain to lead the way.