Why nobody likes the French 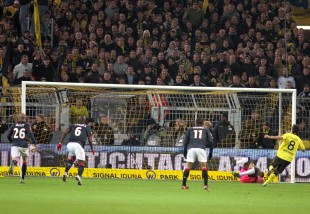 Let's be honest and straight-forward: nobody likes the French. Why? Oh, there are many reasons for that and supporters of Borussia Dortmund got to know a little bit more in their match against Paris St. Germain, which ended in a bitter 1-1. Remis. There we have it, one of the reason why nobody likes the French. Remis. It's very simple and really that easy. Remis. The French language sucks! After studying French for seven years in school ending up in only knowing half of the vocabulary today and understanding less than the half of French people speaking in a terrible fast way, I have the right to say that. And everyone who heard the annoying announcements during the match in the Westfalenstadion will agree to that. So, nobody likes the French... and honestly, they don't even like each other. But we will come to that point later... 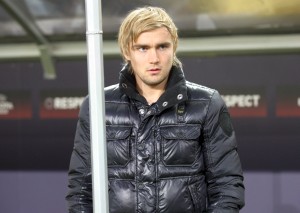 After the controversial loss at home against Sevilla, Borussia had the pressure of not losing – and better winning – the match against Paris to continue dreaming of reaching the next round of the Europa League. After the tie – which is a much better word than remis – not everything is lost, but let's stick to the match first. Because of Schmelzer being sent off the field against Sevilla, Jürgen Klopp had to replace him and brought back Dortmund hero Dede on the left defensive side who was supported by all 50.200 fans in the temple over the whole match. Furthermore, Lukas Piszczek replaced Owomoyela on the right side again, the rest of the team remained unchanged.
Our opponent recently won their last seven matches without even getting a goal against them and made little changes to their expected line-up as Giuly and Hoarau, who was in talk of going to Scheisse 04 before the season, took place on the bench. However, some famous names like Claude Makelele or Péguy Luyindula could be seen on the pitch. 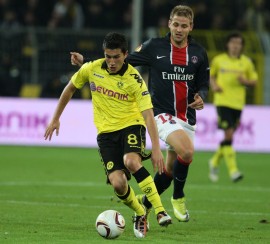 While the French supporters of whom several hundreds made their way to Dortmund came a few minutes late, the match was already worth watching. A cross by Kagawa Shinji from the left found its way to Barrios in the middle of the penalty area an he acrobatically brought the ball onto the goal, but only hit the post (14th). It shouldn't be the last chance of Super Lucas. In the mean time, the supporters of Paris St. Germain had fun playing musical chairs. The two opposing supporter groups had nothing more to do than to be hostile to each other and that's why the Dortmunder security moved them around in the stadium. In half two, one group ended up to be on the eastern tribune in the last rows. Like I said, the French don't even like each other. A very sad thing if you consider that both sides are supporters of the same club and while the two groups supported in a nice way at times – more critical points coming up later – Paris would have a nice group of supporters if they would unite. But as we know through the news, the French are having fun revolting against everything, destroying things in their streets and stuff like that. Yeah, nobody likes them...
Coming back to the match, Dortmund had good chances to secure the lead during the first 45 minutes. After corner kicks by Sahin, Lucas missed the goal again (25th) and a shot out of 18 metres by Großkreutz swooshed away from the goal (33rd). Generally, Borussia seemed to want more out of this competition while the French made a good impression in their defensive but only had a few opportunities to score at this time, Camara's header after a free kick was more or less the only example of French offensive football (36th). Remis – gosh – at half time, okay, but somehow disappointing since you could feel the pressure on the terraces. However, the atmosphere in Westfalenstadion was quite good and could compare to the European night against Sevilla. 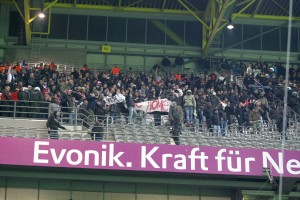 At the beginning of half two, youngster Mario Götze replaces Sven Bender because of a minor injury and a few minutes later, the tension is rising more, when Nuri Sahin stands in front of the goal in order to perform a penalty kick after Kuba had been laid by Sakho. Sahin who under the week was said to be a candidate for Bayern Munich's next season withstand the pressure and scored in the left corner – nice kick, Nuri, please, stay in Dortmund! The lead for Borussia, the second half could'nt find any better start (51st), but then the time started where Borussia had to double the score. A free kick by Kuba found his way to the head of Subotic whose header slightly missed the goal just two minutes after the lead and a shot by joker Lewandowski didn't end up in the 2-0 as well (67th). It was a really good European game with Borussia being the better, dominant part of it, but having problems to decide it by scoring again. Even Super Lucas who played a good match did not set an end to the match and lost the mini-match against Paris Goalkeeper Edel (76th). Therefore, Paris was still in the game and even though their supporters once again tried to be noticed by using several pyros – did I say that nobody likes the French? – they got offensive and Lewandowski saved a header by Sakho after a corner kick right from the goal line. In the last ten minutes of the match, some discussions took place referring to a possible penalty kick the referee refuses to give Dortmund when a French hit the ball with his hand, but all in all, the ref is not in the responsibility of BVB not winning this match. It ended up like everyone in the stadium was afraid of. A throw in by Jallet, Hoarau fights his way to our defense and passes the ball to French joker Chantome who equalizes the score for the French, giving me the last reason to underline my statement that nobody likes them. A last shot by Lewandowski misses the goal in injury time and Borussia misses a big opportunity directed to the next round of European competition with this tie in the home match against the French. 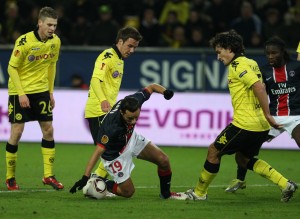 With Sevilla winning in Lwiw, Borussia finds himself on the third place in the ranking of group J, having four points on their side after three matches have been played. Paris is on top with seven points, Sevilla is two points ahead of us and Lwiw is still waiting for their first point. With Sevilla and Paris away and Lwiw at home, it will be a very hard way to make it over the group stage but we should have known that before and the home matches against Sevilla and Paris showed that we can also beat them away. However, European competition does not seem to be our best part of this season, but after a hard match in the Europa League, we have always beaten a big team in Bundesliga (Scheisse and Munich), so we will beat Hoffenheim this Sunday and then see what's possible in France in early November. Nuri Sahin declared this match to a final match and this will it be. Go on, BVB and give me some relief, knowing that the all-hated French will not be our death in the group stage.