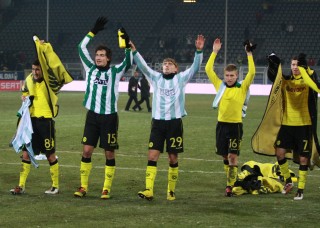 The second of December was a good day for us black and yellow ones. Our wishes had been heard and all of them came true. Big thanks to Paris who managed to beat Sevilla by 4:2, which gives us the the possibility to accomplish the next round of the Euro League. Due to a confident 3:0 against Lwiw we now have all the chances to reward us for the great games we have already played throughout the Euro League Season this year, by winning in Sevilla.
Since Barrios had injured himself it was time for Robert Lewandowski to show that he was more than a joker. Furthermore Götze was allowed to take a break, for him Kuba took place on the right side while Kevin Großkreutz took over the left side. As so often throughout the past days it was very, very cold in our Westfalenstadion but Borussia Dortmund didn't seem to mind. 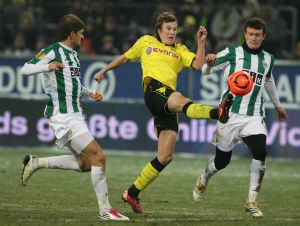 Only one minute in the game, Lewandowski got the ball and sprinted down towards Lwiw's goal, but unfortunately he shot the ball past the right goalpost. An early wakeup call for the players from the far away Ukraine. It actually took Dortmund only four more minutes in order to really celebrate this time. After a corner, shot by Sahin, Kagawa jumped higher than everybody else and headed the ball into the right corner of the goal. 1:0 for us. Brilliant. Dortmund strived for control over the game and accomplished that by constantly pushing towards Lwiw's goal. In the 12th minute of the game Lewandowski had his second chance to score but missed again. After a nice pass from Subotic it looked like 3 Dortmund players were standing offside but actually there was still one of Lwiw's players standing close to the goal. Lewandowski was probably just as surprised about his opportunity as I was at that time. Only ten minutes later it was Kagawa who circled around a couple of Lwiw's players but shot the ball past the left goalpost. Around this time Paris was already 2:0 in the lead. Everything seemed to work for us. It did not look like Lwiw was eager to somehow achieve their first point in our group and so Dortmund continued to play but missed to increase the score. Lewandowski, Großkreutz and Kagawa failed to score another goal in the last ten minutes of the first half. In Paris they were still playing as well and after Sevilla had scored 2 goals, Paris just put one on top as well which resulted in a 3:2 for Paris at the time of break. 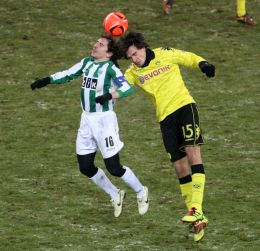 Things that don't work in the first half, simply work in the second half. Again after only four minutes played this time a freek kick shot by Sahin found its way towards the penalty area where Hummels jumped higher than everybody else around him and headed the ball into the goal. Lwiw's Kutznesov actually had his head on the ball as well but we simply ignore that and reward our Matts Hummels for that goal. 2:0 for us. Dortmund dominated the game without throwing themselves into it too much. Lwiw still didn't seem to be interested in scoring which lead to chances on our side. Kagawa and Lewandowski, however, continued where they had stopped in the first half. In the 67th minute of the game it was time for a comeback. Our great player Zidan was finally back after a long and dreadful injury, he replaced Kagawa on the field. Minor chances by Zidan and Lewandowski followed but it was Piszczek who had another big one only a few minutes before the game was supposed to end. Unfortunately he found his master in Rudenko, Lwiw's keeper. In the 90th minute of the game Robert Lewandowski finally made his well deserved goal after all. After trying for so many times he shot the ball towards Lwiw's goal from about 15 meters after a perfect pass from Sahin. It might have been an offside goal but by this point it didn't really matter anymore. Shortly after that the game was over and Dortmund gathered their well deserved three points. Since Paris had managed to score another goal, 4-2, Dortmund doesn't need to look at how the other game in two weeks might end because we simply hold the possibility of moving on to the next round in our very own hands.

It was not fireworks and celebrations but it was well deserved and well played this victory. After all our victory never really appeared to be in great danger, Dortmund worked sovereignly and competent.
Well done boys, you absolutely deserve this final game in Sevilla. It will be a tough one but I believe in this team and I am sure that they will make it. Way to go Borussia. 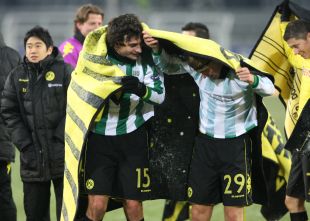