Derby Day - from Boycott to Delirium of Joy 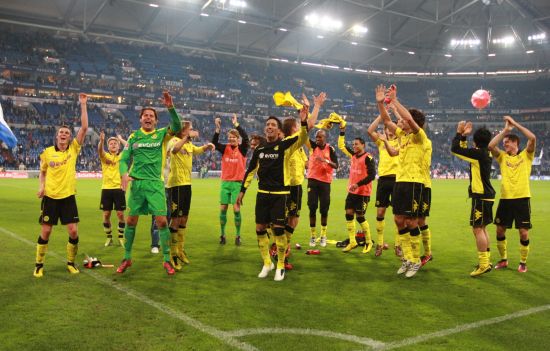 After weeks of build-up, Derby day had finally arrived on Sunday. But this year a large group of BVB supporters chose to boycott the game at Gelsenkirchen to protest against the rising ticket prices. The police even obstructed the boycotter´s plan to watch the Derby together at the old Rote Erde ground after the match of our reserve team by requesting ridiculous numbers of trained stewards. Funny enough that no stewards or cops were needed, when the team was welcomed by the same fans after the gloriuos victory. Maybe people are more dangerous in broad daylight, inside a stadium, not carrying pyrotechnical material, who knows?

Since schwatzgelb.com backs the boycott, there will be no regular match report of the fantastic 3:1 victory that left Gelsenkirchen with 0 points after 4 matches. Instead we will focus on the way two of our editors spent Derby day. My Derby day went pretty parallel to Steph´s, so I´ll leave that story to him. But first Henry reviews his Derby experience.

Sch…e against Borussia – what a great black’n yellow Sunday! 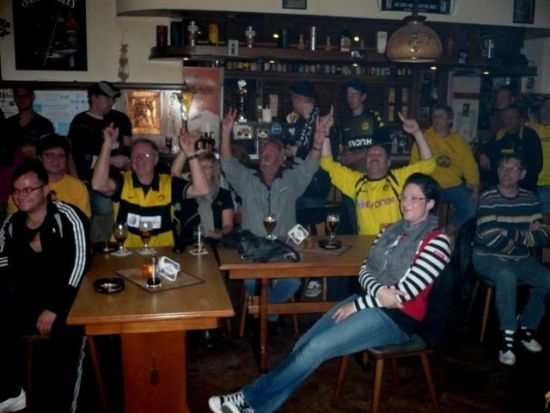 What a great Sunday afternoon and evening!

Of course not for everyone, especially for friends and fans of a suburbian club in Gelsenkirchen! But without a doubt September 19th 2010 will be one of our best moments as Borussia fans!Since three years Borussia didn’t win against our “beloved” opponent from Gelsenkirchen, Borussia’s last win in Sch…e’s arena was even 5 years ago. Since yesterday this long and sad period is over! A 3:1 win in Sch…e against a harmless team in blue and white. And it’s no overstatement when we all declare that our win could be even higher: A lot of first class chances, one offside goal and three woodwork hits for Borussia!

Two fantastic goals of Shinji Kawaga and one from Robert Lewandowski who replaced Kagawa in the last 15 minutes of the match rushed Sch…e to the end of the table. Huntelaar’s goal in 89’ was much too late for Sch…e’s confused and messy playing team. Due to the boycott the match wasn’t sold out for the first time. So the best solution was to watch the match in a Dortmund pub without any attendance of blue and white loud-mouthes. Included picture is only one example how BVB fans celebrated our win. Funny enough that most of Sch…e fans forecasted a win for their team before the match. Reality proves them wrong. No one of them stayed until the final whistle! So hard times will come for coach Felix Magath’s expensive and highly overrated team! 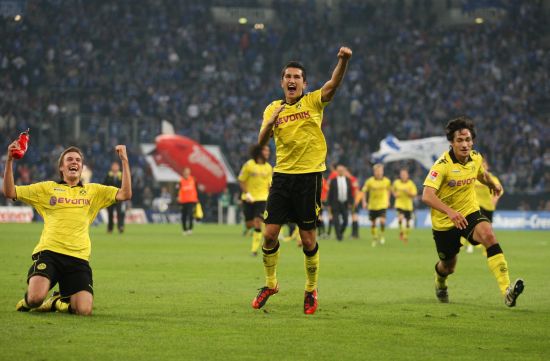 But that’s not our problem! Yesterday’s photo shows you that Borussia’s fans are far away from discussing problems! Let’s all raise our glass to Shinji Kagawa’s first goal in GE, to Shin Kagawa’s second goal in GE, to Robert Lewandowski’s first goal in the league, to our coach Jürgen Klopp, to all yesterdays black’n yellow players, to our first win in GE after 2005, to our current position three in the table, to…reasons enough for the “best” hangover!.

Dortmund is drowning in Pils – Sch…e in tears! 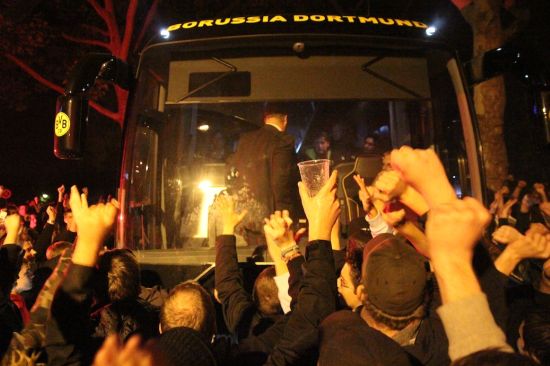 Breakfast, bike, Sunday Paper. Had a 2/3 page about the “Kein Zwanni” campaign. Smiled about a statement from Schalke official Peters, who claimed that they could have sold the standing tickets for 60€.

Walked up to Rote Erde. Watched the lousy BVB II vs Eintracht Trier match. Got all excited after 70 minutes. The Derby got closer. Where would I watch it? Can we go on and really break the curse? Met a bunch of friends, walked down Lindemannstraße towards Möllerbrücke, sat down on an ale-bench on some block party at Sonnenplatz.

Decided their silver screen was way to slow, walked up into a bar. Met some old friends. Got even more nervous. Saw Bender’s goal been taken away by the ref. Saw Borussia bully Schalke. Kagawa scored. Missed a few more chances. Saw the gaps in the standing area. Game not sold out! Our kids bossed the millionaires even more in the second half. Got nervous after the 2-0, had a beer to calm down. Convinced we would win after Lewandowski scored his first Bundesliga goal. Watched Magath’s blank face, waited for the interview. Had a laugh, when he said “this is the worst start ever”. 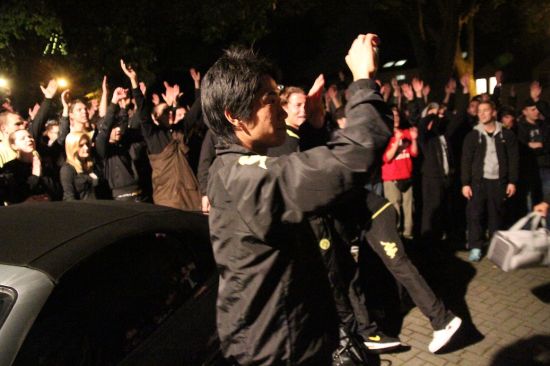 Walked out of the bar, onto the street. On my way home. But like a magnet 400 people walking up Lindemann to the stadium pulled me in. Found myself in the middle of the welcoming party. Lost my cell phone in the middle of it. Somebody handed it back a minute later.

Got home, soaked up everything about the match. Fell asleep with a smile on my face.