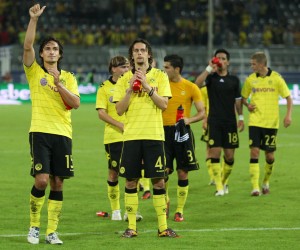 "Yes we can!", I wrote before our first Europa League Match against FK Agdam Qarabaq. Now, some hours after our return to the European stage, we have to say "Yes, we did it!". After a 4-0 (4-0) victory, we are less than one step away from the group stage of this year's European competition. A very convincing first half was enough to beat our opponent from Azerbaidzhan, but let's put first things first ...

Our line-up was pretty similar to the eleven players who started in the national cup against Burghausen. Großkreutz was able to compete, but Owomoyela had to be replaced because of illness. Our new squad member Piszczeck took his place on the right defensive side instead. The rest was equal to the team who defeated Burghausen 3-0 last Saturday. As far as our guest from Azerbaidzhan go, I will not waste time to talk about them since, to be honest, I don't know if there were any surprises in the starting line-up. Of course, they started with eleven players who ended either with –ev or –ov and that's all I know about our opponent.

The game started exactly the way most Borussia supporters wanted it to start: with an early goal. After some moments of surprise and shock on our side, it was Shinji Kagawa, who was confident enough to test the opposing goalkeeper and the man called Fahrad failed this test. A ball which would be saved by 90 per cent of all amateur goalkeepers found his way into the goal of Qarabaq and Kagawa celebrated his first goal for his new club in an official match after 13 minutes. Some minutes later, it was Lucas Barrios' shot which made the Südtribüne celebrate. Again, this shot would have been saved by probably all goalkeepers but after a big failure of Fahrad, this ball lso found his way into the Azerbaidzhan goal. The big relief was easy to feel on the terraces and Borussia was two goals ahead after 20 minutes had been played. But it got even better. After a great cross of Piszczeck, Barrios was there again and scored with a nice header, the 3-0 after 29 minutes. Again, this didn't mean the end of our first half, since our Japanese youngster Kagawa managed to score with a header, even though he is only 1.72 metres tall. Therefore, Borussia ended the first half with one of the best leads possible after 45 minutes. 4-0 and a big step directed into the group stage of the Europa League, which guarantees five million euros of income as well. 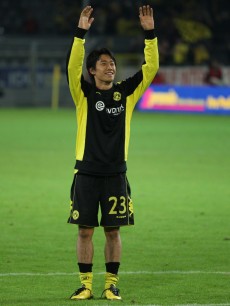 In the second half, Borussia controlled the game but did not come up with many big opportunities to even increase the lead. Kagawa scored two goals, but because of off-side, the Südtribüne had nothing more to celebrate. However, they did celebrate itself and especially Norbert Dickel who had problems with the technique since Azerbaidzhan supporters are said to have influenced the energy links of our beautiful stadium and Dickel had no chance to call the subs of our team. However, the fans reacted wittily by celebrating the hero of Berlin. At the start of the first half, they even supported the goalkeeper of our Azerbaidzhan guests who had similarities to bicycles in the spelling of his name. Some stupid "Scheisse 04" chants were turned down by the majority of the BVB supporters to underline the importance of the European game on the one side and of course to show how stupid it is to mock our rival when we are playing someone who has nothing to do with all that stuff. In the end, Dickel and Borussia managed to overcome all the technical difficulties, the subs were called retrospectively and everything was fine. Borussia celebrated a 4-0 victory and should have no problems to make the final step into the group stage next Thursday in Azerbaidzhan, since Qarabaq did not take control of the match at all and only had small opportunities during the first ten minutes of the match. You could not imagine to start off the new season better than with two victories in the national and the European cup. 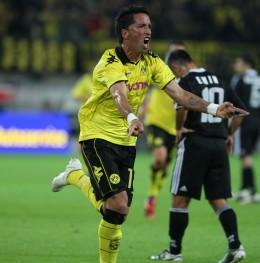 If there is anything to blame on our team, then it is that they did not score any other goals in the second half. However, a 4-0 lead should be enough to make it to the group stage next week. Therefore, Borussia needs to concentrate on our next opponent this Sunday, Bayer Leverkusen, which is of course not the easiest opponent to start against. But with a great player like Kagawa in the starting line-up who showed his class during the match against Qarabaq, we are very hopeful to see another victory... even though Rene Adler is no bicycle in the goal of our next opponent.