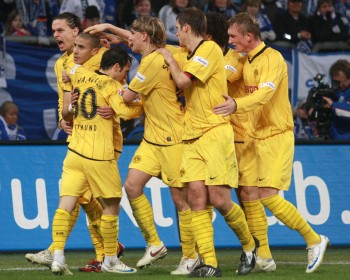 Now, with an interval of two days - what can we say about the match on a rainy Friday in the Veltins Arena?

First remark is that both teams played under the closed roof (!) of the arena. To be honest, a strange feeling: No wind, no raindrops - a more artificial atmosphere of a football match! But to close the roof was Sch...e's decision and on the other hand it was easy money for the electricity company!

Many discussions were held beforehand the match. For Sch...e it should be the key match to prescind from a lot of current crises: Ongoing discussions about a change of the manager and coach, the urgent financial need to climb higher in the league and also important: going ahead of Borussia. For Borussia the environment is luckily not so disturbing. To catch up to the UEFA Cup slots was the main target. To keep or enlarge the distance to Sch...e should have been an additional positive effect.

With the exeption of the injured defender Marcelo Bordon Sch...e could provide it's best team. For Borussia the situation was not so comfortable. The injured players Dede, Kuba, and Tinga were not able to play and the red card for Lee from our last match against Cottbus was an additional handicap. The young Marc Schmelzer completed the defensive together with Owomoyela, Subotic and Santana, Nuri Sahin acted together with Kehl, Boateng and Hajnal in the midfield and Alexander Frei was the only striker from the very beginning. 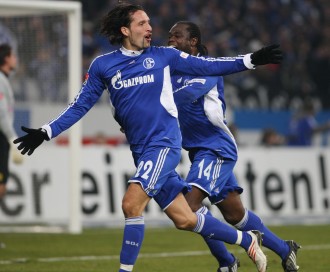 It was easy to recognize that Sch...e started with a lot of motivation and the strong will to dominate in their own stadium. Borussia tried to fight back and it was Kevin Prince Boateng who injured Sch...e's Mladen Krstajic already in the 4th minute. Luck for Boateng who got only "yellow" for this foul! Krstajic had to leave the green and Turkish international Halil Altintop replaced him. For Borussia a replacement with bad consequences: Near the corner flag Altintop played against two BVB defensives and passed to Kevin Kuranyi. After that Sch...e's most critizised striker hammered the ball into the nets! No chance for Roman Weidenfeller and maybe the "goal of the month" for Kevin Kuraniyi and his artistic posture with both legs in the air! A shock for Borussia, Sch...e continued its attacks and Borussia's defensive tried all to resist. But a lot of bad passes and turnovers affected Borussia's game. Especially Sebastian Kehl and Neven Subotic did not show up in a good shape. And Alexander Frei was the lonesome striker without any useful assistance from the midfield. It was Borussia's luck that Sch...e was unable to score the next goal. Luckily Kuranyi missed the opportunity for another goal.

Beside a really bad acting Borussia in the 1st half another scene made feelings run high. Sch...e's supporters presented fragments of a Borussia flag on their tribune. Maybe the same big flag which was stolen in autumn 2006 from our South tribune. A very poor sign of fan culture but also the arrest of more than 100 so called Borussia fans after the match are facts which have nothing to do with football!

First result of Jürgen Klopp's analysis during the break was the replacement of Boateng by Mohamed Zidane. A good decision to revive Borussia's offensive and to save Boateng, who was in danger to see "red". After ten minutes in the 2nd leg Nelson Valdez replaced Alexander Frei and a new team of strikers tried now to score a necessary goal. Borussia's big luck was that again Kevin Kuranyi was unable to gain his second or even third goal. Thank you Kevin! But also Borussia increased pressure on Sch...e and the players in the blue and white colours had a lot more to do! Especially the tricks and technical skills of Mohammed Zidan putted Sch...e 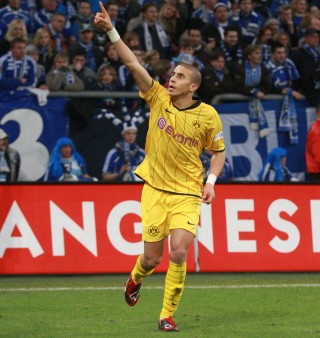 on the spot and in the 76th minute Mohammed was very close to score his goal for BVB. But in the 81st minute nothing could stop him. A nearly lost ball came back to him and his shot was the 1:1 and more than a deliverance for around 10.000 Borussia supporters in the Sch...e arena! Sch...e's power of the first half was blown out totally and a very good reaction of goalkeeper Manuel Neuer saved Sch...e from a home defeat.

All in all the result was a little bit lucky for Borussia especially in consideration of Sch...e's strong first half. So it was the third 1:1 for BVB in the fourth match of the second leg. With the unforgettable 3:3 in the first derby of the current season we gained two points in total against a team which was some months ago one of the favourites for the top three in the league! Not a bad balance for Borussia and there will be enough hope for the upcoming matches!

Currently Borussia is still in position 8, 4 points behind Leverkusen in position 5 which means an UEFA Cup position. Next match is against current number "2" Hoffenheim and it's high time for the first 3 points in our Westfalenstadion, hopefully with Tinga or even Dede (?) back in our team.

And Sch...e? Fact is they are still behind us in position 9 and their discussions about a lot of internal problems will continue, but that's not our business! So this report deserves another last sentence which is very simple and equal to the headline: 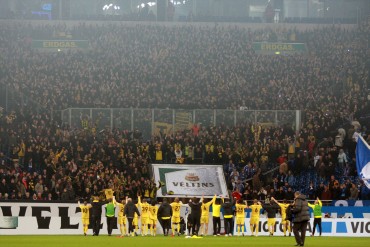