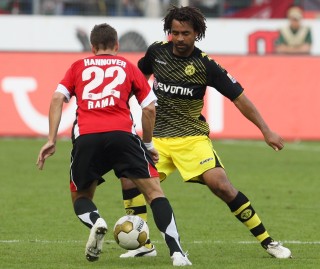 ....to the middle of nowhere. It was a sad day, that 19th of September. At least a sad day for Dortmund Fans who once again had to be satisfied with only one point. After the debacle against Bayern it was really time for Dortmund to get its act together and take home three important points. After a few days of special training camp, the players and the management were positive that the game against Hannover would be the hoped for coup. But as usual, reality and pipe dreams are two different stories. It was a fair 1:1 since Dortmund dominated the game in the first half, while Hannover grew stronger in the second half of the game. But let’s start at the beginning.

Dortmund changed its formation again and so Bender, Hajnal and Valdez stood in for Santana, Kuba and Rangelov. In the first half Dortmund began superior and created one goal scoring chance after the other. In the 8th minute it was Sahin who failed because of Hannover’s strong replacement keeper Fromlowitz. Only a few minutes later Hajnal missed the goal. The game continued and only ten minutes later Dortmund’s players had a couple of chances which they failed to use. In the 22nd minute Tinga and Valdez managed to stand in eachothers way, about which we should really be more surprised I guess; one minute later Fromlowitz parried formidable against Hajnal, who was serviced very well by Zidan. And as football goes, if one team does not manage to use its chances, it’s the other teams turn. Hannover now had a few opportunities to score, however Bruggink (25.) and Djakpa (28.) as well as Haggui (30.) failed to get the ball into our goal. Thank God Hannover seemed to be as inefficient as we were. Four minutes later the game was over for Dede who got injured and Schmelzer stood in for him. Apparently though, sometimes in life, wonders do happen and so it was Sahin who scored for us in the 45th minute. After a high cross from the middle by Owomoyela, the ball got to Sahin who won the duel against Haggui and scored. It seemed like we were allowed to go into the break with a happy feeling on our minds. We did not know then, that we were supposed to lose that happy feeling after only a couple of minutes of the second half of the game when Hannover scored for the 1:1. It is toilsome to discuss Roman Weidenfellers position in this scene, however, I would like to say that my neighbour might have been able to catch a ball from that angle. But back to the development. After a toss, Ya Konan took the ball, while Dortmund’s defence took a nap, played some chess or whatever it was they were doing, led to the right side from where he kicked it into the goal while Weidenfeller…well- let’s drop it. It is frustruating to keep witnessing that Dortmund has the upper hand of the game for such a long time and still manages to let the game slip out of its hands through sheer stupidity. It must be stupidity because to this day I still believe that it cannot be incompetence. I pray for it to not be incompetence. After that another form of stupidity followed when Hannover’s scorer got a yellow card for climbing a couple of steps onto the fence in order to celebrate with the fans. It is redundant to discuss the necessity of that rule. To this day I have not understood it. These things were about the most exciting things of the game and despite a few minor chances on Hannovers side the game held nothing for us fans anymore and so the game ended 1:1.

Dortmund talked of improvement. Maybe one point is an improvement from zero points, however, all in all it is still to little. Our account now states six points out of six games. If Dortmund continued playing that way it would mean 34 points after 34 match days. Better days will probably come. On this weekend however, disappointment was spread among the fans. The problem is: it is okey to play a tie, it is even okey to lose, but not like that. The “DFB Pokal” game against Karlsruhe and the “Derby” against Schalke are now more important than anything else. A defeat is simply prohibited. Fight Dortmund! For the fans and the team.