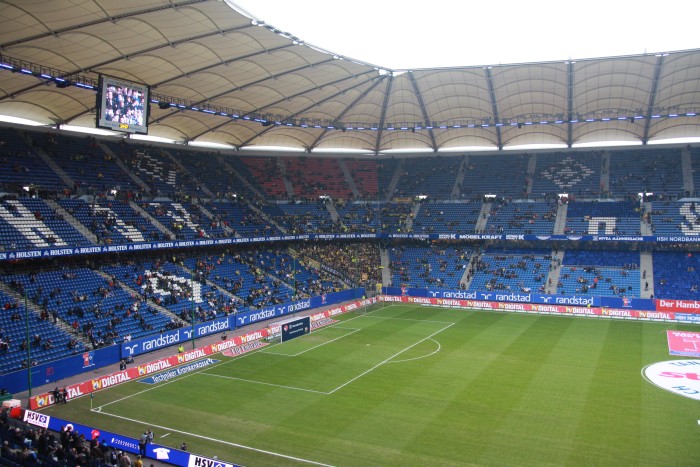 After a successful start and a 1:0 win against Cologne our next match will be in Hamburg. Not an easy job for our Borussia on matchday # 2 because Hamburger SV - in the opinion of many Bundesliga experts - is one of the favourites for a top position in the league.

Anyhow, Hamburger SV's start into the new season was hard work for a "so-called" favourite: In the cup competition we saw a win against second division club Fortuna Düsseldorf after a penalty shoot-out. On first Bundesliga matchday HSV also failed to live up expectations after "only" a 1:1 draw against newcomer Freiburg. When we look back to last season BVB fans have mixed emotions regarding to the team from the north. In Hamburg we saw an unlucky 1:2 and at home a 2:0 win for Borussia. And not to forget last matchday: An offside goal of Hamburg against Frankfurt in the last minute kicked out Borussia from the qualification for the Euro league. But let's leave this annoying chapter behind and also the referee's (expensive) mistake of previous season! Let's take a look at the current situation!

Two important changes opened the new season for Hamburg: Coach Martin Jol and longtime manager Dietmar Beiersdorfer left the club, much to everybody's surprise. Rumours about some disharmonism with club president Bernd Hoffmann go around and until now HSV is still without a successor for manager Dietmar Beiersdorfer. New HSV coach for this season is former Leverkusen coach and former German international (2 international matches) Bruno Labbadia.
But there are also some basic changes in Hamburg's team: Among others Ivica Olic, one of HSV's most effective strikers jumped ship and plays now for Bayern München. Also defenders Timothee Atouba and Michael Graavgard left the club. On the other side some new HSV team members show promise: Defender David Rozehnal (Lazio Rom), midfielder Ze Roberto (Bayern München) and striker Marcus Berg (FC Groningen) are the most important new signings for this season. Together with the established HSV players e.g. goalkeeper Frank Rost, German internationals Marcell Jansen and Piotr Trochowski, former BVB striker Mladen Petric - only to mention a few, the current team is without a doubt able to play in the upper range of the league.

It's also Borussia's intention to play in or near the upper range of the league. Only few players could attend training during this week. Sebastian Kehl and Leonardo Dede are still injured and in case of Sebastian Kehl it's definitely that he will not return on the green in Hamburg. His recovery from groin injury takes longer than expected. Leonardo Dede (broken jaw) played during the last days without a carbon mask. From Dede's point of view he will be able to play but finally it will be Jürgen Klopp's decision about his possible return. Mats Hummels and Marcel Schmelzer received minor injuries from their below 21 matches in Kiew but it seems to be no problem for them to join the team on Saturday. No discussion about midfielder Tinga (in excellent shape against Cologne) or our strikers: First impressions of "world goalgetter" Lucas Barrios were quite good. Probably Barrios together with Nelson Valdez will again open the match. Mohamed Zidan and our "100 % Dortmund boy "Kevin Grosskreutz are optimal alternatives. Zidan is struggling with an irritation of the medial collateral ligament. But medics are also in good hope that he will recover until Saturday. One remark about Kevin Grosskreutz: The Dortmund born 21 years old youngster made his promising debut last Saturday against Cologne. Let's all cross our fingers for Kevin's successful career in the black'n yellow jersey! Maybe we will see his second match for Borussia already in Hamburg! Again not much enjoyable news about Florian Kringe: Former regular midfield player suffered an inflammation of the hip capsule and was told to cut down training.
For the sake of completeness it's necessary to mention that in HSV's lineup there are also some uncertainties: HSV's medics have taken goalkeeper Frank Rost and striker Marcus Berg
into care.

Around 10.000 BVB fans will support our team in Hamburg. It's difficult for a serious forecast for this classical match but all of us hope for a successful second matchday!

Come on Borussia - yes we can!