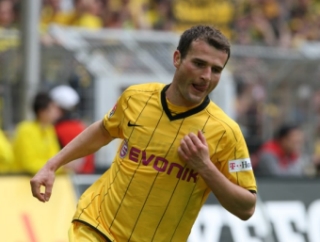 The mood among the supporters is not that good. At least a major part of the Borussia family does not understand why our top striker of last season was sold to FC Basel in a shock move. But with an objective view on the facts, it should become obvious that Borussia had no other choice.

One of the major reasons for this move was, that Alexander Frei is 30 years old. Surely, that is not that old, but offering a new contract over 3 or 4 years would definitely be a risk. It would not only be a risk regarding his performances in 3 years, but also looking at the financial side of such a contract. Frei is one of the top earners of this squad. A 3-year contract could sum up to 7 million Euro - maybe too much of a risk for Borussia Dortmund.

Alexander Frei, Swiss national top striker and skipper, played here for 3 seasons. Back then he was bought from Stade Rennes in transfer worth 4.2 million Euro. Ok, he had a nice overall record, but with a closer look on the facts, it is obvious that his score sheet beside set pieces is not that impressive. Out of 34 goals that he scored since 2006 8 were penalties. That leaves 26 goals - less than 9 goals a season. That is nothing someone would call a top striker.

And then, even if we accept his record, how often did he enter the pitch at all? He missed many matches due to a hip injury, that needed many months to recover. And nobody knows how long the success of the operation lasts.

Looking at Frei as a person and part of our squad, it is more than obvious that he is not easy too handle. While some would say, he is a leader and has his own opinion, there also many people, who report of some kind of antisocial and contentious aspects. Especially as the atmosphere in our team is so good at the moment, we don't need to put that at stake by keeping a maverick.

One of the driving aspects of this move was Jürgen Klopp and his understanding of modern tactics. He wouldn't tell that the newspapers but his idea of a striker is a fast, attacking perpetuum mobile that also helps out in defence. Alexander Frei doesn't' fit into this scheme. He is too slow and his defending qualities are by far not as good as the ones of Nelson Valdez.

But even if you neglect all these arguments, at the end of the story Alexander Frei wanted to leave. He wanted it so strong that it didn't made any sense to keep him around Westfalenstadion. Frei wanted to go back to his home city of Basel were he grew up and played during his youth. And he wanted to show the people at FC Basel that they made a mistake back then, when they didn't gave 19 years old Alexander a contract for the first team.

All in all with a realistic view on the facts, we have still enough strikers on our squad. There are Nelson Valdez, Mohamed Zidan and Dimitar Rangelov. Adding to that we have Ginczek and Kullmann from our own youth and still right midfielder and Polish national player Kuba, who is also capable of playing the striker position. And even if our officials come to the conclusion, that we are short of forwards, we still have 4.5 million transfer fee plus 2.2 million Euro saved salaries to spend in a young striker, who is still on the rise. You see, no need to panic. Borussia did the right thing.