Please no hangover after Hannover! 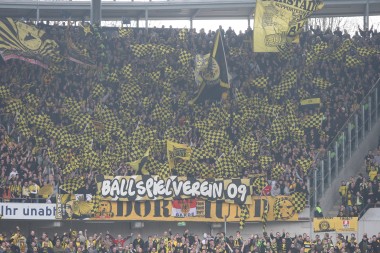 It's before matchday # 6 and until now our Borussia underachieves all our expectations we had in the beginning of the current season. Last Saturday we hit rock bottom when we all saw the bitter 1:5 defeat against Bayern München in our Westfalenstadion.

But let's be careful when speaking about "rock bottom"! Of course the result is absolute rock bottom but let's not forget the first 30 minutes of the Bayern match, where we saw a real good performance of our black n' yellows. But 30 good minutes are not enough especially when we think about the next difficult jobs for Borussia: In the league the match in Hannover this Saturday, next Tuesday the cup match in Karlsruhe and September 26th the derby against Sch...e! Three important matches and their results will set the course for our team in the near future.

In preparation of these important matches Jürgen Klopp made the right decision. A two-day training camp at "Klosterpforte Marienfeld" in East Westfalia. Not only due to the heavy defeat against Bayern but to work and discuss undisturbed with the complete squad. A right decision to analyse the present situation in such a workshop atmosphere. Also we must keep in mind that during the last weeks many of our players were absent because of a lot of international games.

So we all are curious to see the first hopefully positive results of Borussia's training camp on Saturday in Hannover! Hannover is currently in position 11 in the league and for both teams a defeat would mean more or less, direct contact to the relegation zone.

Hannover's fans registered a lot of disquietness during the last weeks. Former coach Dieter Hecking was fired very early in the beginning of this season. Hecking worked for three years as a coach in Hannover, now the club's former youth coach Andreas Bergmann is his successor.

Also the injuries of players like strikers Jan Schlaudraff or Mikael Forssell, only to mention a few, had negative impact on the team's performance. On the other hand Hannover's manager Jörg Schmadtke (former goalkeeper in Düsseldorf, Freiburg and Leverkusen) had much success with comparative cheap signings of striker Didier Konan Ya and more defensive players like Valdet Rama and Constant Djakpa.

Scoring goals is not the strongest point of Hannover 96. Czech international Jiri Stajner shot all three goals for Hannover this season. But until now Hannover's defensive is second best and BVB's currently only second last. A strange development compared to last season. Hannover's defensive was the weakest in the league, Borussia's one of the best. This season we saw until now 11 goals against BVB, nearly one third of the complete last season (37)!

We all can be sure that the current weakness of our defensive was one of the central items Jürgen Klopp and the team discussed at the training camp. But it would be the wrong way to point the finger on individual mistakes of defenders, midfielders or strikers. I think we all agree that Borussia has to return to the mentality of previous season. And the away match in Hannover should be the first step for the recovery of the real Borussia! Only Sebastian Kehl will not join the squad, so Jürgen Klopp will be spoilt for choice to select the optimal team for Hannover. He as well as we all know: It will be no easy job for our team to return to Dortmund with a success but it will be not an unsolvable problem!

So let's close this pre report with an interesting fact: There was never a 0:0 in 36 Bundesliga matches between Hannover and Borussia, which means there will be enough hope for goals! And hopefully with a better end than last season's 4:4 after Borussia's leads of 2:0 and 4:2!

May all the conclusions and good intentions of Borussia's training camp will find the way to Hannover!