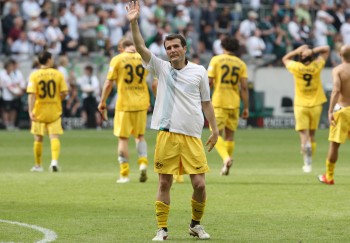 Hopes were high since Borussia Dortmund overtook Hamburger SV last weekend. Unfortunately the 34th and last match day had some ugly surprises for all black-yellows. While BVB finished with a 1-1 in Gladbach, Hamburger SV scored an injury time goal, that lift them up to the fifth spot.

Scenario/Line up
BVB coach Jürgen Klopp made just one change. Neven subotic got booked for the fifth time last weekend and was replaced by young central defender Hünemeier. And just in case you don't remember: Hünemeier is 23 years old and so our oldest central defender! But apart from this change Jürgen Klopp fielded the same line up that march through the last weeks on a winning spree. Gladbach coach Hany Meyer also made one change compared to last week's 0-5 desaster against Leverkusen. Pauuwe was replaced by Stalteri and that meant that Meyer once again left young starlet Marko Marin on the bench. The talented left midfielder seems to be in contact with Werder Bremen and might sign there within the next days.

First Half
The match started with perfect surroundings. Sunshine and a sold out Borussia-Park - what else can you expect? And indeed Borussia Dortmund started in style. In minute 6 a pass by Nuri Sahin found Alexander Frei, who passed it directly into Valdez' run. Unfortunately the ball was played a little bit too long so that Nelson Valdez wasn't able to fire a real shot. His tipping of the ball was at all no problem for Gladbach goalie Bailly. And Borussia kept the pressure high. Again Sahin found Valdez, this time without Frei's help. Nelson sprinted past Gladbach's defender and tested Bailly with a low shot from 15 metres. This one was surely a better opportunity than the first one. And while Valdez was waiting for an third try shock news from Frankfurt reached Gladbach - Hsv had scored the 1-0 lead against Eintracht. That meant that BVB now had to win this game to stay on the fifth spot and reach next season's Europe League. The best answer would have been a goal. But Valdez again missed. Though this header was not easy to convert. Nonetheless Borussia Dortmund showed 25 minutes of fine football. But somehow Gladbach was now getting back into the match. Despite being technically not that sound, the fought hard in midfield and now broke BVB's domination. One the other hand they weren't able to create any chances to score. And while Borussia Dortmund was slowly getting back from their short rest, there was the first of several heavily discussed situations. Valdez penetrated Gladbach's box from the right side. And while at first look it seemed like Gladbach's player Daems made a perfect tackle, the slow-motion revealed that Daems fouled Valdez and that Dr Brych should have awarded us a penalty in minute 39. Gladbach then had the last say in this first half - and what a stunner that was! A header by Dante reached for the far corner of Weidenfeller's goal but luckily hit the post. 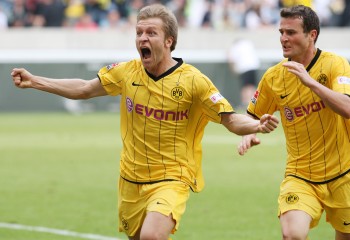 Second half
Both teams needed a little bit of time to get back into the match. Both teams had a low passing accuracy during this period. And it were 2 more shockers that broke the lethargy. Within not more than 3 seconds HSV scored another goal and raised their lead to 2-0 and in Gladbach in minute 57 Dante scored after corner kick for the home team - 2-0 for HSV and 0-1 against BVB! What a mess! But once again the referee misjudged a situation. The duel just before the corner kick was a foul on BVB defender Santana and not a corner kick for Gladbach. But things got even more hectical. Frankfurt scored a first goal only 2 minutes after Gladbach's and Hamburg's double strike. Another 2 minutes later Frankfurt hit the equaliser! That meant we needed just a draw to get back to the fifth spot. And believe it or not....another 2 minutes later Kuba stole the ball from a Gladbach defender, paced into the box and left Bailly no chance to save - 1-1! That would have been Europe League at that moment! Unbelievable, the guest sector went nuts! And as Bielefeld was behind at home against Hannover 96, Gladbach was also not on a relegation spot in this moment. But what seemed like a comfortable situation for BVB was a dangerous game at all. What to do now? Play full power for a second, winning goal and risking a counter attack that could cost spot 5? Or holding on to the draw and hoping that HSV finishes with a draw. BVB played a mixed tactic and raised the pressure a little bit. Especially Dede tried some runs down the left wing, but lacked efficiency. And seconds before 90 minutes were over there were some more news from Frankfurt - HSV had scored in the first minute of injury time by Piotr Trochowski - from an offside position! News spread immediately over the field and BVB now stormed desperately Gladbach's goal. But the black-yellows weren't able to create any more chances and Dr Brych wasn't of any help as the gave no more than 20 seconds (!) injury time. Final whistle - all over with our European dreams.....

Summary
In the end we were victims of our tactics and risky game we played during the last minutes. Would have the linesman seen Trochowski's offside position everybody would have hailed our clever strategy to play it save. As HSV finally won, we are the idiots of this match day. Nonetheless we experienced an amazing season with spectacular football, fewest defeats of all teams, a fantastic central defence which is still very young (2x20y, 2x23y). Jürgen Klopp brought at all the fun back to Westfalenstadion, where we lost not a single match. Though Europe League next season would have been a big boost, financially and emotionally, but this team is still developing and could have a bright future. 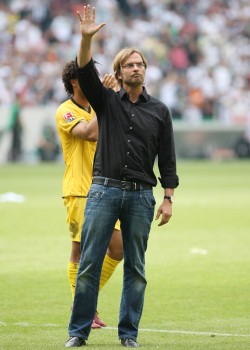 Voices
Hans Meyer: „It was a deserved draw. It was our aim to decide the relegation battle ourselves. I am happy about how we did that. Collecting 20 points in the return leg with only 8 home matches is really great."
Jürgen Klopp: „Gladbach deserved avoiding relegation, because they fought really hard. So did we, but we missed our goal The upset is there but I am also proud of how this team performed during the whole season."