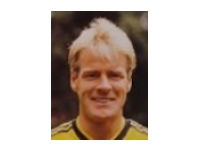 At the end of the 1986/1987 season Borussia Dortmund qualified for the UEFA-Cup. A spectacular 4-0 win away to Frankfurt on the last match day gained them the fourth spot. A season before it was only due to a last -minute Jürgen “Cobra” Wegmann goal that Borussia avoided relegation in the play offs against Fortuna Köln. The 86/87 season had seen the arrivals of Norbert Dickel, Teddy deBeer, Thomas Helmer and Frank Mill, all of them making a big impact on our game. With chairman Gerd Niebaum, who had taken over from Reinhard Rauball in June 1986, and coach Reinhard Saftig Borussia looked on the upswing again. They had sailed in rough waters ever since 1983 and nearly went bust before Rauball took over and Niebaum finally put an end to the financial crisis.

And now it was Europe. Saftig added a few new players to the team - one of them being a 28year old Scotsman by the name of Murdo MacLeod. He had worn the legendary colors of Celtic 281times and scored 55 goals. He was the first of three Scotsman – the other two being Paul Lambert and Scott Booth - to play for Borussia until this very day and the third Scotish pro to play Bundesliga football. Up until this day fans remember him as one of the pacemakers of a team that was to lay the path to glory during the last decade of the 20th century. The team went on to win the German Cup in 1989, the first trophy to be won by a Dortmund team since the European Cup Winners Cup in 1966. Only days before Borussia’s last Meisterschaft in 2002 German newspaper “Die Welt” wrote about the soon to be Meisterteam around the likes of Amoroso, Rosicky and Koller: “Not since the days of Frank Mill, Murdo MacLeod and Norbert Dickel has Westfalenstadion seen such an inspired and fascinating team”. 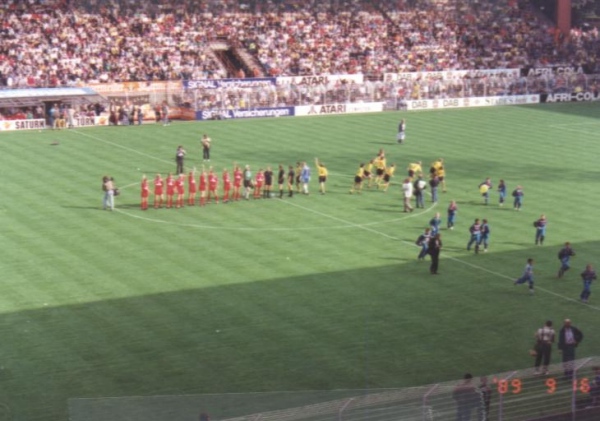 MacLeod left Borussia in October 1990. The then still very much intact “foreigner rule” (only two foreign players were allowed to be fielded at once) had left Murdo with a place on the bench after Russian defender Sergej Gorlukovich had signed a contract in Dortmund. He played his last game for Borussia against Chemnitz on October, 2nd , the eve of reunification. He returned to Scotland to play for Hibernian.

Schwatzgelb.com chatted to Murdo MacLeod before the kick-off of the 2009/2010 season

It’s been quiet on you around here since you left Dortmund. Where did your career lead you? What have you done since quitting professional football?

After leaving Dortmund I went Hibernian FC. I stayed there for 3 years, we won the Scottish League Cup and played in Europe.

I then went on to be player manager of my first team.Dumbarton FC. I then moved on to Partick Thistle for 2 years. I then got the call to go to Celtic as assistant manager to Wim Jansen. We had a great time for 1 year, winning the Premier League, League cup. After that I was offered to go to BBC to work on their sports shows.

Remembering your time in Dortmund what were the moments that last?

I never had a "Moment". My time in Dortmund was special

And did negative things stick with you?

Have you been to Westfalenstadion after leaving the club?

Are there any former team-mates or officials you still keep contact with?

I still keep in touch with a few people

One of your first games for Borussia ironically was the UEFA-Cup clash with your old team Celtic Glasgow. How did it feel like – after nine years with the club – to come back to Celtic Park. And then to walk past Celtic?

It was special to go back to Celtic Park to say goodbye. It meant so much to me when we beat them 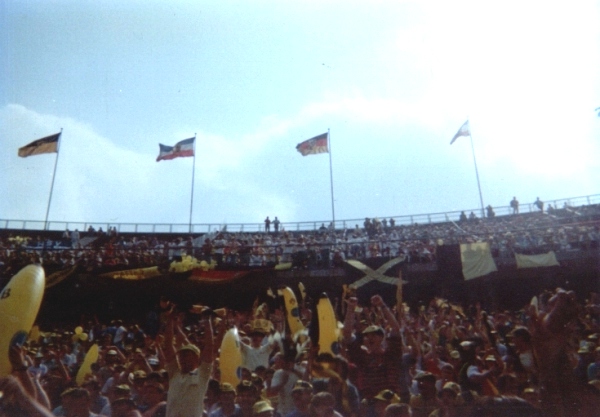 Being on the team when Borussia for the first time in more than 20 years lifted a trophy in 89, did you feel you achieved something historical? Do you still remember what it felt like coming back from Berlin to celebrate amongst the many people on the streets of Dortmund?

I knew it was a special time for the club and the fans. Its a day I will never forget

Are there any other matches that you still think of when recalling your time in Dortmund?

All the good ones

Was it hard to adjust to Bundesliga football when joining Borussia in 87? Did you feel your style of playing fitted into the “Ruhrgebiet?

You witnessed the fall of the Berlin wall and played one of the last international matches against the GDR in April 09 (losing 0-1 to a Thomas Doll goal). Your last game for Borussia was a UEFA-Cup match away to Chemnitz on October, 2nd 1990, the eve of re-unfication. How was it like as a foreign player to feel all the changes in Germany at that time? Do you still recall the atmosphere that day?

It was a very historic time for me to be in Germany when the WALL CAME DOWN.

Back in 87 the British army still had barracks in Dortmund. Did you get your supply of Iron-Bru at the stores? And was there any contact with the Scottish community in Dortmund?

I had plenty of contact and support from the British Army in Germany. The Royal Scots were based 10 minutes from my house in Budberg, it was easy for me to go to the camp for anything I needed.

With Sergej Gorlokovich coming in you lost the foreigner spot (only two foreigners allowed on the pitch at one time back in the days) and left Borussia for Hibs where in the first season as a captain you won the League cup. Did you have any hard feelings when leaving Dortmund?

Since your departure Borussia has undergone a lot of changes: Championships, a Champion League trophy, the Team World Cup but also a near bankruptcy and facing relegation a few times. As an old player. Did you follow the news? And if yes were they just news or did you still (and do you still) feel an emotional bond with Borussia?

Dortmund is a big part of my life. I can always say I was very proud to play for Borussia Dortmund

When Paul Lambert wanted to go back to Scotland after winning the Champions League for Dortmund in 97, you were assistant manager at Celtic. Were your old Borussia contacts helpful to steer Lambert to Celtic?

I recommended Paul to Dortmund, so its was good to get him to Celtic

In late 1999 there were rumors that you were in talks with Borussia Dortmund in order to replace Michael Skibbe as the coach. Apparently your camera team from BBC Scotland was banned from the training grounds by above mentioned Michael Skibbe. He was however replaced by Bernd Krauss in early 2000. Was there anything behind those rumors at all? If so why did the deal not happen?

I heard the rumour during the day, I think it was just a rumour.

Have you witnessed Borussias attempt to lift the cup again in 08 in the Olympiastadion in Berlin? Did you meet up with some players of the 89 squad?

I was in Berlin with my old team, it was great to see them.

Where do you see Borussia at the end of the 09/10 season? And who will win the league?

The team must be looking for a top 4 place

Why in your opinion have there been so few British (and of course Scottish) players in Bundesliga lately? As some of those players (Paul Lambert, Keegan, you to name a few) made a lasting impact with the fans and clubs they played with.

I have no idea

We still have a lot of fans from UK coming over to see Borussia play. Some of them travel by car every fortnight, some of them take the train from Edinburgh two or three times a year. Some of them frequently fly over. Reasons they give: The atmosphere is so much better, the prices are still family friendly, you can mingle with fans of the other team, drink beer and also Bundesliga is one of the most exciting leagues in Europe. From your point of view: Is this just an obscurity or has the standing of Bundesliga football improved over all the years?

Where do you see the standard of Bundesliga football in Europe right now? And where is the Scottish football?

Every league has dropped miles behind England. Scotland have dropped as well

With Setanta going bust and the current results in the European competitions Scottish football seems to slip into a bigger crisis. Players leaving for the Championship in England. Most of the teams failing to qualify for the group stages of the European cups. Is there any way out of the crisis? Or will we see Celtic and Rangers entering the EPL in the near future?

Celtic and Rangers would like to play in England. I can’t see this happening.

Having the choice – you rather be a pro now or 20 years ago?

Today for money only. 20 years ago for the good times

Mr.MacLeod, thank you for your time