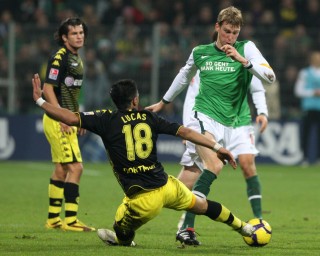 After the victory against Hertha BSC Berlin last week, Dortmund wanted to get another three points against Bremen, who had a good run throughout the past 10 games. Being unbeaten for 4 games , Dortmund strived for 3 points since Bremen was still tired due to the Europe League game against Vienna a few days ago and lacked a few important players, such as Frings and Pizzarro.

Dortmund on the other hand had to cope the injuries of Tinga and Bender, while Dede was able to play again. Santana stood in in the defense, while Hummels took over Bender’s position in the center field.

The summary of the first half? Chance on Bremen’s side, bad pass, bad pass, another bad pass, oh, again, bad pass, goal on Bremen’s side. The game was only two minutes old when Almeida played a nice header towards Özil, who did not manage to get the ball into our goul. After that the games was scatterbrained, chaotic, uncontrolled and filled with mistakes. Bad passes on both sides dominated the scenery, hence the game could not really develope and chances did not evolve. I also wondered whether the linesman had a new flag or Alexander Frei was in the team again; I can’t remember having witnessed that many offside decisions. Let’s, however, jump to minute 36 when Bremen decided that they had enough of inching the ball back and forth. Bremen’s Hunt strived towards the penalty area from the right side and had time as well as space to play a perfect cross on Özil who kicked the ball into the right corner of the goal. 1:0 for Bremen. It was tough luck that the weather God decided to pour rain on the field that day and thus make it slippery. Weidenfeller might have gotten the ball if he hadn’t slipped away. Only 7 minutes later Zidan had to save our team on the goal line after an applied corner kick by Mertesacker . A well shot free kick by Sahin in the 45th minute was Wiese’s chance to prove himself. He fisted the ball over the goal and the teams seeked their way to the dressing rooms. Time for Bratwurst and beer for the fans and a proper speech for the team. 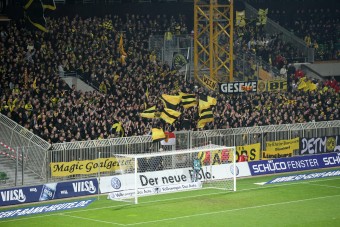 The second half began more vital than the first one had ever been. Santana rescued us in the last minute when Bremen’s Marin could not really control the ball after a quick attack on Bremen’s side. Only a couple of minutes later drama in Bremen`s penalty area. After a nice combination Kuba played a perfect pass onto Barrios who kicked the ball into the goal. 1:1. So we thought. As I had mentioned earlier, the linesman seemed to have a new flag and so he decided on offside. Wrong decision. This time however, Dortmund decided to not hesitate very long, but start another offensive attack which, this time, led to the well deserved 1:1. After Mertesacker could not get the ball out of the penalty area properly, Valdez hammered the ball onto Bremen’s goal, Tim Wiese could not react thoroughly enough and let the ball bounce back to where Lucas Barrios stood. Barrios had no trouble kicking the ball into the goal. The game became way more sportfully than it was before and there were now open combinations on both sides. Neither Bremen nor Dortmund were satisfied with the one point. In the 68th minute Subotic had the chance to score the 1:2 after kicking the ball over the goal after a corner kick by Sahin. Dortmund was now pushing and seemed to be closer to another goal than Bremen was. In the 81st minute it was up to Valdez to redeem the team and the fans when he appeared alone in front of Wiese. Instead of kicking the ball into the goal, though, he kicked it onto Wiese who parried it to the side. In the end, the referees decided to end the game after exactly 90 minutes and so Bremen and Dortmund parted with divided points. 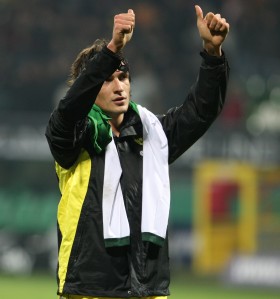 While the first half was a lesson out of the book “how to not play football”, the second half was more energetic and not dominated by bad pass combinations. The game became more fluent and in the end it was actually fun to watch. Both teams somehow deserved the point, since Bremen was the better team in the first half while Dortmund stepped up during the second half of the game. The only bitter thought left that evening was the fact that we were actually close to winning that game in the end. Dortmund expanded its run to 5 undefeated games and has the chance to win three points against Mainz in a couple of weeks.