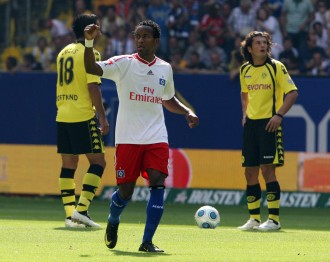 The black-yellows were drawn back to reality after there win last week. HSV played an brilliant first 15 minutes and in the end beat us 4-1. An absolutely deserved loss for Klopp's boys.

Scenario/Line up
Jürgen Klopp lined up the same eleven guys who beat Cologne last Saturday. Dede, who was back in the squad after an broken jaw, took seat on the bench and so Schmelzer got another chance.

The match started in front of a capacity crowd with sunshine and temperature above 25° C - perfect football atmosphere! And yes, also the 22 men on the pitch did their part. With only 3 minutes played a corner kick by HSV found somehow Owomoyela's leg and from there the ball bounced direction goal line, where Demel scored easily - 1-0 for HSV! Roman Weidenfeller didn't look that good in this situation as he misjudged the corner kick. But only 2 minutes later BVB stroke back. A high ball found Kuba's head and from there the ball was deflected direction goal where Valdez scored with a fine header - 1-1! And while most of the supporters on the stands thought "wow, what a start!", it became even better - for the HSV supporters. In the 10th minute Ze Roberto hit the right post and then converted the back bouncing goal - 2-1 HSV! To add to that mess, Elia dribbled past Owomoyela in minute 12 and set up for Guerrero, who scored from 12 metres - 3-1 HSV! Unbelievable first 12 minutes!!!! The game now became a little bit more relaxed and HSV played it cool until halftime. 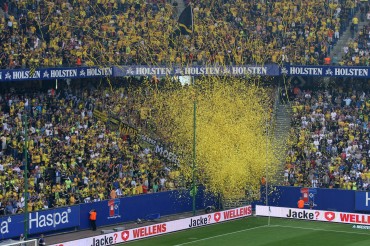 HSV again took control of the match but over the minutes looked maybe somehow arrogant. That brought BVB back into the race. And while Borussia had some nice approaches it was again HSV that scored. In minute 72 a shot by Ze Roberto was not well saved by Weidenfeller and so Berg converted the deflected ball from short distance - 4-1 HSV! The last highlight was an offside goal by Dimitar Rangelov 5 minutes from time. He himself was not offside but Sahin stood in Frank Rost's sight and so the call was ok. In the end the result was ok and HSV the deserved winner.