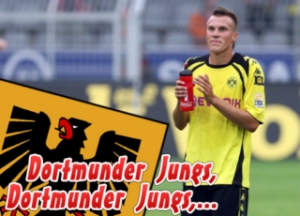 Borussia impressively underpinned last week’s performance in Hoffenheim by duping Nuremberg in Westfalenstadion with 4:0 and makes every effort to finish off a good year 2009.

Coach Klopp had to make a difficult decision: Nelson Valdez, fit again, was ready to get back into the team against Nuremberg. But would Klopp change a winning system and not reward Kevin Großkreutz, who showed a good performance on Valdez’ position? He wouldn’t and therefore the same line-up as in Hoffenheim started the match in Westfalenstadion.

Nuremberg started confidently and Bunjaku appeared a couple of times dangerously in the box. But the moment anyone could start doubting the superiority of those in yellow and black, Kevin Großkreutz scored (9’): Sven Bender beautifully served Großkreutz on the left wing. The Dortmund-born youngster embodied all the coolness of the past weeks and didn’t allow Stephan between the posts any chance – 1:0.

But the team was still hungry – only 4 minutes after the previous strike, it was Lucas Barrios who scored second. Owomoyela gave a sharp cross into the box, where Lucas Barrios was all alone. The Argentinean striker wasn’t successful in his first attempt, but luckily got the leather back and somehow pushed it into the nets.

Nuremberg seemed to be shocked and couldn’t respond by any means. Subotic’s free-kick (22’) was just an appetizer for the next goal scored by Borussia: Barrios nicely duped Wolf in the box, but his attempt was saved by Stephan. However, the ball – high in the air – was directly taken by Zidan who had no difficulty to score from 5 metres (32’). Borussia fully dominated the match and even had a chance to score for the fourth time: Großkreutz was given a great pass by Barrios, but his finishing was too weak.

Sven Bender didn’t come back onto the pitch, where Santana came into the team and played as centre back, so that Hummels took over Bender’s role.

Borussia had actually no need to push themselves even more, but nevertheless they did so. Hummels’ great header just slightly missed the target after a corner (48’). While Pinola tried a shot from a less promising ankle (51’), it was Bunjaku who had Nuremberg’s best chance, but missed the goal by a metre (52’).

Borussia had a couple of high-quality chances, but failed to score for the fourth time. Zidan tried a delectable shot from within the box. Stephan was already beaten, but Pinola saved just centimetres in front of the goal. (52’). Just two minutes after that great chance, it was again Zidan who nicely served Barrios, but Stephan won the one-on-one once again and also saved Kuba’s shot which immediately followed Barrios’ try.(54’).

But less than ten minutes later, it was Mats Hummels who finally scored. Owomoyola’s sharp shot was saved by Stephan, but the rebound was then headed by Hummels with no chance for the goalie.

Borussia had a couple of good chances afterwards, which were, honestly, miserably finished off. Zidan was all alone in front of Stephan but failed to score his second goal of the day (73’). Just minutes before the end of the match, Valdez (who came in for Kuba), was nicely served by Barrios. But the Paraguayan international airily lost the ball and wasted another good chance (86’).

After minutes of no contention, referee Gagelmann blew the final whistle just in time.

The first very clear win this season – Borussia today made a clear statement of attack on the first five of the table. With a hard match in Wolfsburg, but also a match against Freiburg in Westfalenstadion, Coach Klopp’s team still got the chance to prove that this was a valid statement.