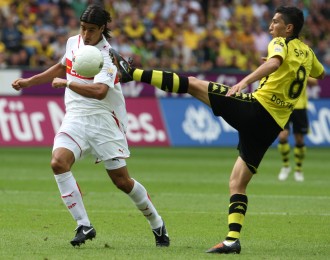 It's right after you have been smashed twice. Real done you no good and Hamburg showed you were it's at. You want to carry on. At Stuttgart is your opponent. Mad Jens about to retire. The last time he'll sport an outfit in Westfalenstadion. And you don't want to start 1 win & 2 loses. That is how you start. And you end with 1 win, 1 draw & 1 loss and 1 date at the court. Your ref is called Fleischer (which translates into Butcher) and according to his name he slaughters the match.

And so goes the story of this match. Dede is back in our team, whereas Stuttgart coach Markus Babbel fields new and fairly unknown characters: Schieber, Rudy and Niedermeier (the Stuttgart version of Mats Hummels, also from Bayern Munich, also a defender). Only 72.100 fans have come up to the ground this Saturday. There were 75.000 at the Madrid match on Wednesday. Sure thing. Stuttgart is no Real just yet. The first few minutes the black n yellows get possession of the ball and Owomoyela freaks some fans out when losing a ball right at the touch line. Weidenfeller spares the fans more trouble. He saves. Tinga has to be replaced by Mats Hummels after a few minutes. His muscle is injured. He will be missed for two weeks (one game). Both teams don’t start to play football until suddenly after 15min Valdez sets one up for Sahin who scores. 1-0! Everyone thought. But the Butcher show was about to begin. He saw an offside where there was none. He saw another offside a few minutes later. No No No! No offside, Mr. Fleischer! After 27 even Butcher can not do anything against Valdez who is played clear by Lehmann and in good old Valdez fashion puts the ball between Lehmann’s legs and into the net. “Lieber Nelson, lieber Nelson Valdez – Schieß Uns Bitte in die Champions League”, some of the people start to sing but when only minutes later Valdez after yet another Sahin lay up only finds Lehmann they stop. Nothing much happens now. So Butcher gets out his cards and does a few tricks. He misses a penalty call for Stuttgart after Dede had played everything but the ball. Then during a Dortmund corner he awards a free kick to Stuttgart. “I had that feeling that Subotic hindered Lehmann thus awarded a free kick”, Fleischer later explains and continues “I never saw what really happened”. What really happens is that Mad Jens hits Subs and Subs is not shying away from him either. Mad Jens later cries he “in twenty years as a pro had never lost his teeth before” but Subs “nearly did” him. Oh well. Give & take. A ban for instance. German FA investigates right now and rumours have it that both will be banned for more than just one match. 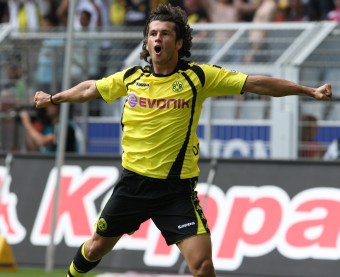 But still the game continues. And Borussia are not back on the field when a free kick flies into the box and past our players onto Niedermeier’s head. He curls the ball past Weidenfeller to make 1-1 right after half time. It is a slow start for BVB and The Hammer nearly lobs one over Weidenfeller after 50min. After 58 Kuba awakes and starts a run past Magnin who follows him for the next 20m or so keeping in touch with Kuba with one of his hands. Eventually Kuba loses the ball and Butcher doesn’t care. What could have been a red card + penalty is nothing. But other than that the story of the second half is quickly told. A good but uninspired game travels towards the end. Only a Rangelov, coming in as a sub for Barrios after 60min, header against the cross bar and a Großkreutz sprint over half the pitch add some excitement and of course Butcher who whistles like he sees it. Boy. A blurry vision. Both teams are not able to make any impact.

And the game ends. And it’s a draw, a somewhat deserved draw. It leaves Borussia with four points after three games and just one goal scorer – Nelson Valdez. Will he be the target man? With Barrios giving him just that tiny little bit of extra space he needs? Will Barrios score or will the media come at him? Will Kehl be back and what happens to Subotic? Might there even be place for Kringe with Tinga and maybe Subotic ruled out for the Frankfurt match? 31 games to go. Loads of questions to still be answered.