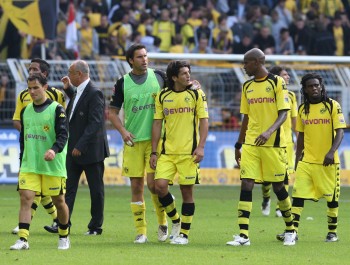 It’s obvious: Borussia’s situation before matchday # 9 doesn’t meet the expectations, most of us had at the beginning of the current season! In the table only at position 12, two wins, 3 draws and 3 defeats, including the bitter 0:1 in the derby against Sch…e. Now, this Sunday we will see the so called “little derby” against neighbouring city Bochum.

Bochum, with nearly 400.000 inhabitants an important city in the region “Ruhrgebiet” hit the front pages during the last months especially regarding the Opel factory. Negotiations between current owner General Motors and possible new owner Canadian / Austrian group Magna are still going on. Until now, sadly without a final statement about Opel’s future in Bochum. Beside these annoying news football in Bochum seems to be the same as every year.

The club relegated 5 times into the second division. Currently at position 14 means direct contact to the relegation zone and that’s nearly a familiar situation to VFL Bochum supporters. No title wins and the relatively low number of 5.000 VFL-members are proof enough why matches against Bochum are called the “little derby”.

One month ago VFL’s Swiss coach Marcel Koller was fired. Main reason for his demission was the weak performance of Bochum’s team during the previous matches. But there are also a lot of opinions that Koller did his best in consideration of Bochum’s low budget. Koller’s successor is currently Frank “Funny” Heinemann, a former VFL midfielder and for many VFL insiders much more than an interim solution.

All in all VFL Bochum seems to be a team without any stars on the green. Most popular players are striker and Slovakian international Stanislav Sestak, former German international midfielder Paul Freier and - well known for all BVB supporters - striker Diego Klimowicz.

For Klimowicz it will be the first match for his new club in our Westfalenstadion. Together with Mimoun Azaouagh, for sure the most dangerous part of VFL’s team. Each of both strikers scored 3 goals, the absolute majority of Bochum’s team in total (9). Worth mentioning is also that Bochum’s regular goalkeeper Philipp Heerwagen will not return into the team. His broken jaw still needs recovery, so 22 years old Andreas Luthe must replace him again.

For our Borussia the latest news didn’t show great promise for sustainable improvement in the near future! Newest “member” on Borussia’s list of injured players is Tamas Hajnal. Our creative midfielder returned with an ankle injury to Dortmund. Most likely he will be out until the end of the year. Also Tinga is injured again: due to a pulled muscle he will not be able to enter the green. Bad news regarding our team captain Sebastian Kehl. Probably we will see his come back not before the end of this year. That means the lack of three key players in the midfield. Not an easy job for Jürgen Klopp to find out the optimal replacements and the best strategy against VFL. Maybe a chance for our new players Sven Bender or Markus Feulner to show their qualities in the vacant positions. Also Nuri Sahin could be a supposable substitute for Hajnal or Tinga. Sahin returned with a minor injury from the Turkish national team but declared himself fit for the match against Bochum. Borussia’s strikers on Sunday will be probably Barrios and Zidan. Both fit well together and Barrios scored his first Bundesliga goal in our last match in Gladbach.

At last a remark of Jürgen Klopp in forefront of the “little derby”: “VFL Bochum is a real good Bundesliga team and this team will fight to continue their teamwork with coach Frank Heinemann and his assistant Darius Wosz. We should not expect exquisite football, team and fans will probably see a battling game!”

70.000 visitors will be expected – and if they will see a battling game or not: Only a win will improve Borussia’s position!