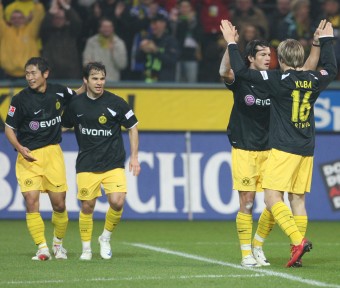 Five wins without any break and five more match days to play until the end of the season. And what is still Borussia's target? Target is still to reach position 5 in the league and the gap to the fifth place is still five points! So the number "5" is apparently something magic in these days. But please put away your match schedule, pocket calculators or even crystal balls! On Saturday it will be the matchday no. 30, our BVB will play in Frankfurt and we will have the chance to continue our successful way during the last weeks. A win in Frankfurt will keep our hopes for qualification for the Europe league alive and we all can be sure that our team, our coach and thousands of BVB fans in Frankfurt will do their best!

Bearing Frankfurt in mind most people's first thoughts will probably not include Eintracht Frankfurt, the town's Bundesliga team. More characteristic for the city at the river "Main" is the skyline ("Mainhattan"), headquarters of banks and industry plants, the International Airport or trade shows like the International Motor Show. Of course an unlucky development for Eintracht Frankfurt when remembering the team's successful years especially during the seventies and the eighties. In these two decades Frankfurt won the DFB cup four times and in 1980 even the UEFA cup. Well known former German internationals like Jürgen Grabowski, Bernd Hölzenbein, or Andreas Möller (do you remember him?) played an important role in Frankfurt's successful years. But times have changed and from 1996 until 2005 Eintracht Frankfurt relegated 3 times into the second division
In 2005 Frankfurt returned into the first division and finished the seasons in positions 9, 14 and 9 again. As cup finalist in 2006 Eintracht could take part in UEFA Cup due to UEFA cup regulations. Currently Frankfurt is number 11 which means no contact to the relegation zone in the moment but also no chance for international matches in the next year. 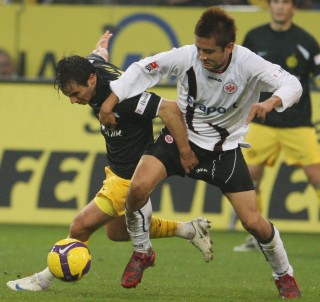 Key players for Frankfurt's development since returning into the first decision are manager Heribert Bruchhagen and coach Friedhelm Funkel. Before his engagement in Frankfurt, Bruchhagen worked as a manager for Sch...e, Hamburg and Bielefeld. Friedhelm Funkel is coaching Eintracht Frankfurt since 2004 but fans don't see him without any controversy. Most critics see no progress in the team's development. But not to forget that Funkel formed a team with a relative low budget and secured Frankfurt's survival in the first German league during the last years..

For now that's enough about Eintracht Frankfurt's history and environment! In the first leg this season BVB won 4:0 against Frankfurt, the highest win up to now. On Saturday Frankfurt will enter the green with its best possible team. Not an easy routine for Friedhelm Funkel. The match against Stuttgart (0:2 defeat) last week will affect the lineup: Japanese midfielder Junichi Inamoto will not join the team due to a rupture of a muscle fiber. Defender Patrick Ochs and midfielder Michael Fink are suspended for the match this Saturday. Still not part of the team will be long time injured striker Amanatidis.

For BVB coach Jürgen Klopp there is no legitimate reason to change the BVB team which began in the last 4 matches. But that's of course no guarantee to continue this way. Current substitutes Tinga, Boateng and Kringe as former members of the starting team are first class alternatives for Borussia's A-team. It's a little bit uncertain if Kringe will be able to enter the green due to troubles with his neck. In the press conference on Thursday, Jürgen Klopp 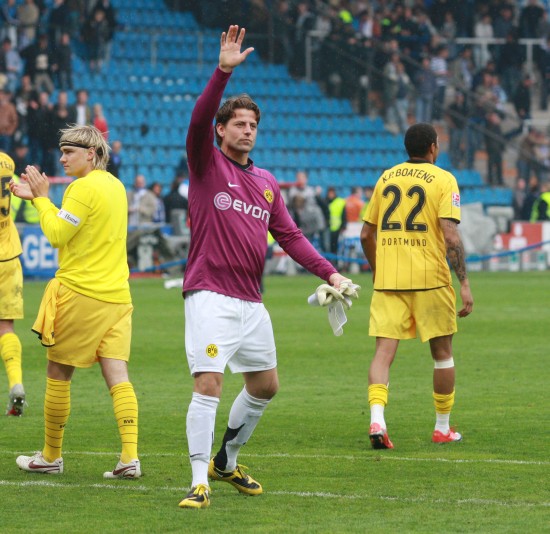 was optimistic that he will return until Saturday. For fans of statistics or chroniclers it's interesting that the longest serial of BVB wins was 6 in 2002 when Borussia won the German championship with coach Mathias Sammer. So in Frankfurt there will be the opportunity to equal this seven year old club record.
But that's only "nice to have" beyond that there is no need in comparisons with the past. Much more important for BVB is the near future on Saturday. The situation is equal to the matchdays before: If Borussia will win in Frankfurt but also the teams above - nothing will change. A draw or even a defeat will minimize all our chances to qualify for the Europe league.

What's definitely clear is that the match will be in an outsold Commerzbank stadium. Around 52.000 tickets were sold and we estimate 10.000 BVB supporters in Frankfurt. No question the BVB roar will continue in Frankfurt and the dream to play in the Europe league next season is still in all our minds!

So let's close this report with a conclusion: During this season Frankfurt never won against a team from the "top seven" Bundesliga teams"! Not a bad sign for Borussia! And taking Borussia's last five wins into account we are strong enough for a success in Frankfurt!