Barrios first goal for Dortmund and what else? 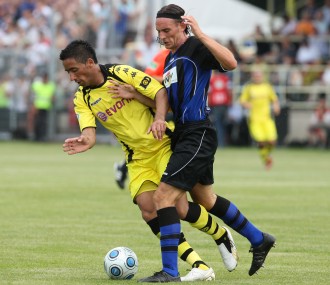 First round of this year's cup competition. Once more (as every year) against a team from a lower division. So this year it was Spvgg Weiden which were drawn as Borussia's opponent.

After a promising preparation phase Borussia's fans where very curios for the new season and so something happened, which no one on Weiden's side could imagine. After the first sale of tickets almost all tickets were sold to BVB Fans so that the next phase was only available for Fans who could visit the local bureau in Weiden. So it turned out that almost 3000 Fans of Borussia were in Weiden's stadium. A stadium which only holds 10.000 people.

Interesting news reached Borussia's fans the evening before the match. Trainer Klopp decided that Kringe would not be in the squad that would play in Weiden. This is the first time in this season where you can see the luxury problem we might have this season: Too many players for only a few positions in midfield.

Besides that Klopp decided that Tinga would replace injured Kehl in the holding midfield and that Lucas Barrios would join Valdez on the striker positions. Subotic and Santana were the central defenders.

After kick-off there was the first chance for our new arrival „Lucas" (as it is on his jersey now) but also Weiden got its chance and in the first 24 Minutes it was not notable, that there were three divisions between Borussia and Weiden

But in that Minute 24 it was „Lucas" time! Hajnal played a wonderful pass through the two Weiden central defenders and Lucas Barrios had no problem to score for the 1:0, which was, to be honest, a little bit lucky. But after that goal Weiden was really shocked and Borussia took control of the match.

And a minute before the halftime whistle there was another chance for Barrios, but he couldn't control the ball good enough to score again. Almost with the break there was a chance for Valdez, but he shot the ball directly at the goalie. So it remained 1:0 for the black'n yellow, which was deserved but could have been, especially after the 1:0 much higher.

In the break coach Klopp changed the first time. For the weak Kuba Hummels came onto the pitch, so that Hummels took the holding midfield position and Tinga took position in right midfield.

And that change constructed some disorder to Weiden's defence so that Sahin had no problem to score for the 2:0 after a nice pass by Tinga.

3 Minutes later Lucas was again alone in front of Weiden's goal but instead of scoring on his own, he played the ball to Valdez, who missed again. 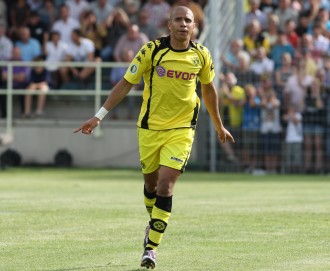 But Weiden had not surrendered yet, so Weidenfeller had to show everything he can in minute 60. After a Weiden shot the ball hit the ground malicious and was hard to save. In the same minute Valdez missed again after a Schmelzer cross.

But it was Weiden who had the better chances at that moment. So in minute 70, but thankfully the scorer hit, instead of the ball, only the ground, so the ball rolled slowly beside the goal.

At that time Borussia slowed down a little bit so that Weiden got a little bit more control of the match and 12 minutes before the end, Weiden's encouragment was honoured. Subotic made a horrible error and Weiden's Mendez scored, through Weidenfellers legs, for the 1:2. After that, Borussia got in real trouble since Weiden pushed for another goal, but thankfully they didn't get much more chances.

So it was Zidan who made everything clear for Borussia in the last minute after a counterattack and scored, lying on the ground, for the 3:1 and the final decision.