A Sunday afternoon in Scotland!!!!! (Or the joy of watching Dortmund Live on TV) 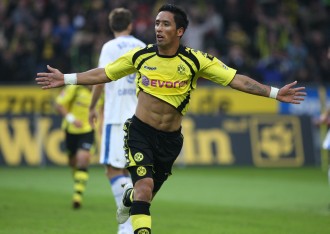 Finally! About time! That is what I heard from most of my Friends in the UK during the weekend by text or mail. A BVB game live on ESPN UK, only can get topped by being in the Westfalenstadion, like 3 weeks ago against Schei**, with 14 members of our Supporters Club, based in the UK.

Borussia Dortmund showed a good performance last night in the game against the "B1" rival VfL Bochum. With some first team player missing (Kehl, Tinga, Hajnal) Klopp decided to play a 4-2-3-1 formation. Watching the first 20 min of the game it looked more like a 3-2-5, because Zidan, Sahin and KUBA joined Barrios and Valdez up front.

Weidenfeller in goal had a good game with a solid performance. His change of gear from Pink yellow to Red yellow seems to have a good omen, for the play and for people’s eyes!

In the back we saw DEDE, Hummels, Subotic and Owomoyela. All 4 showed a good game. Subotic showed us with his goal in the 51min that he still can do what he done last season, score goals with his head and being strong in the defense. Mats Hummels stayed back incase Bochum tried to counter attack, which they did once or twice. Here our old friend Diego Klimowicz had a go or 2 on Romans goal, but without a result.

Bender, Sahin, KUBA, Valdez and Zidan formed the midfield. Bender showed a good game again. Sven won 83% of his tackles and balls. He is growing in the position of Kehl.

30 hours flight" Valdez was done in after the first 45 min. again we saw a Nelson running a lot, trying hard but we didn't saw a goal from him. But this gave Le Tallec a chance to show people what he is made of. And he showed a really good performance in his first 45 min for the 1st team, when he joined Lucas at the front.

Most impressive was Zidan, who turned out to be official MOM, after running his guts out and creating very good chances for Dortmund. Was this outburst of his talent based on his thoughts about the Spanish league and EPL (official version!) aka I want more money, or does the position suits him and his style of play. To be honest, I don't care, because when he is keeping up that performance I see a Hajnal sitting on the bench when he returns from his injury.

KUBA had some chances to score himself. But his eye for the open man, in this case Barrios, gave him an assist in the stats for the 1-0. Nuri Sahin was showing that he is still running under full steam. Up front Barrios tried his luck to score. Barrios showed as well that he was in the zone. He created chances and tried to take his chances, and one of those gave us the 1-0 in the 20 min.

Dortmund was dominating the game most of the 90 min. this are showing the stats of the game too: 18:8 shots on the goal (I only saw 3 of Bochum, maybe I was getting beer during the other 5) and 5:2 corners.

Let’s hope we can keep up this level of performance, because on Friday we are going to meet Leverkusen. And guess what……….. Another live Dortmund game for us in the UK! God is on our side right now! Time to get beer and Frikadellen from LIDL or ALDI (yes, we have those here too).