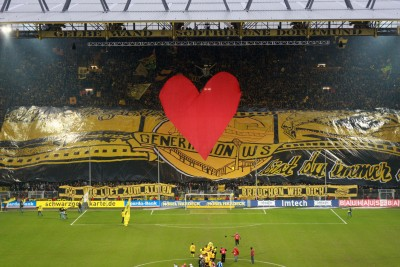 Plenty of hopes were associated with the match against Cottbus: A revival of a stable defence, lively football and 3 points necessary to catch up with the other teams competing for the UEFA-cup slots. However, disappointment was the only outcome of the match.

As for Borussia, Sebastian Kehl could finally make it back into the team after having suffered from a severe injury for three months. Coach Klopp therefore built up the midfield with Kehl, Tinga, Boateng and Hajnal - meaning that Florian Kringe had to take a seat on the benches (which is quite reasonable in light of the past matches). Neither the attack nor the defence were changed from the match in Munich.

Energie Cottbus's team was set up quite offensive with 2 strikers opposed to their usual line-up for matches outwards.

The match got started boringly. But unlikely, this was rather our fault than Cottbus's. A combined lack of dynamism and accuracy in passing enabled Cottbus some room for gameplay. Valdez and Frei were totally cut off as no passes or initiatives could be noted from the midfield.
And eventually, this lead to Cottbus scoring after about half an hour: Cagdas got the ball from Skela's weak try and just hammered it into the nets! Unfortunately, this was not undeserved. However, Borussia suddenly noted that it was supposed to play football. Especially Hajnal now substantially enhanced the gameplay. After a corner, Valdez and Subotic just missed the ball. But then it was Hajnal again who played a lovely pass to Kehl who was pulled down by Cagdas in the box. Penalty! And as this is Alex Frei's expertise, our Swiss national scored (36').
In the remaining ten minutes we could luckily rely on Roman Weidenfeller: Against Jula and Skela he dramatically saved shots in the last few minutes of the first half. 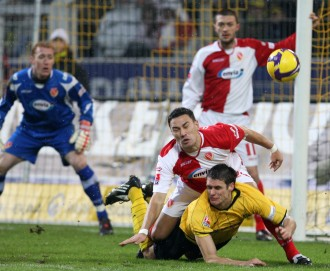 Borussia was now seriously inclined to turn around the result, but it lacked the means to do so, it seemed. Hence, there were hardly any notable chances for BVB, just until the 64th minute: Hajnal brought a lovely cross into the box where Alex Frei beautifully took the chance - but Georg Tremmel somehow managed to save this try. What a tremendous scene from Alex and, unfortunately, from the Cottbusian goalkeeper. In the succeeding minutes, another huge chance arouse: Kehl suddenly got the ball in the box and stood lonely in front of Georg Tremmel. But our captain seemed quite overwhelmed by this situation and his "shot" was nothing but a weak try and Tremmel had absolutely no difficulty in saving it (69th)
But all this is not to say that Cottbus was now substantially weaker than in the first half. Skela and Illiev (who appeared to be hard to handle for Owomoyela) remained consistent dangers.
Borussia's current problems became obvious in the last 20 minutes of the match. In the defence, Neven Subotic performed substantially weaker than in the first round of the season and contributed to the defence being quite instable. However, it should be noted that Neven alone made this happen: Sebastian Kehl's role is decisive for the stabilisation of the defensive part of the team, but after his long lasting injury he is certainly not yet on the peak of his performance level. But as for Neven, his age is to be considered, i.e. we can be pretty sure about him becoming a stable rock again. Also, the wings must engage in offensive gameplay more frequently. In the second half, there was hardly any nice cross to be served to the attackers. And thus the only notable event was the extremely doubtable red card for Young-Pyo Lee. (‘91th). 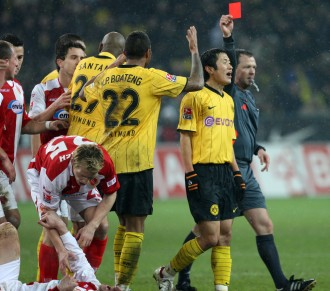 A really disappointing match. Borussia showed one of the weakest performances of this season and missed a chance to bump up into the upper third of the table. A win in between the hard starting schedule (Leverkusen, Munich, Sch*lke and Hoppenheim) would have relieved all of us. So the match against Cottbus implies that there is a lot of work to do...