Borussia Dortmund held on to their winning spree 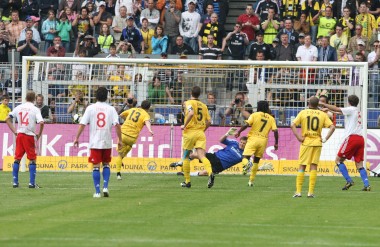 The black-yellows made it five in a row and beat Hamburger SV 2-0 at home. In an intense match that saw not too many highlights it were Kehl and Frei who finished off the North Sea team.

Jürgen Klopp was in a comfortable position as he was able to field the same line up for the fourth time in a row. So in front of Weidenfeller Dede, Santana, Subotic and Owomoyela started as our flat four. In midfield Klopp again chose Sahin over Kringe and Tinga as left midfielder. Kehl started as holding midfielder while Kuba took the right side and Hajnal was our playmaker. Up front it were Valdez and Alexander Frei.
On the contrary HSV's coach Martin Jol had to cope with many injured players. Maybe the biggest blow for him was the fact that Jansen and Petric got injured during last Wednesday's cup match against Werder Bremen. And it was surely no help that the whole team went 120 and finally lost due to penalties. Surprisingly Jol lined up just one striker and left Olic on the bench.

A sold out Westfalenstadion and sunshine set the stage for a nice afternoon of topflight football. HSV started firm and didn't look like being tired from the cup match just 3 days ago. Especially their right side with Pitroipa and Jerome Boateng was way too often up and away down the wing. While Kuba had a first minor approach after 2 minutes it was Pitroipa in minute 4 who set the first highlight. But his effort from the right corner of the box was wide. Dortmund didn't look as confident as they should with 4 wins in a row. In minute 14 BVB scored but as Kehl and Valdez were clearly offside, the referee didn't point to the pitch circle. 5 minutes later it was again HSV's turn. A nice pass nearly found Guerrero in the box, but central defender Santana cleared the ball with a desperate tackle. Although BVB was no more into the match it still looked a little bit like HSV was the home team and Borussia just looking for counter attacks. One of these moves nearly resulted in a goal when a low cut-in by Kuba was heading for Frei. Unfortunately HSV goalie Frank Rost was able to clear. Anyway Borussia more and more took over the midfield and Hamburg was pressed back into their own half. While in minute 30 a spectacular bicycle kick by Valdez was well wide, only 2 minutes later BVB had another fine approach. A fantastic pass from right midfield by Nuri Sahin cut through HSV's defence like hot knife through butter. The ball found skipper Sebastian Kehl and the former national player scored easily - 1-0 for Borussia Dortmund! Besides a promising attack that was interrupted by Frei's offside position the first half didn't offered any more highlights. 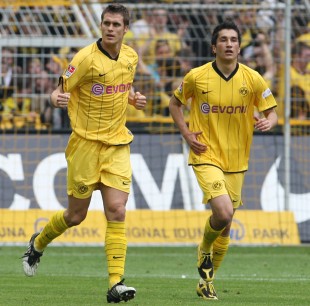 Guest coach Martin Jol reacted and brought Olic onto the pitch. The experienced striker, who will join Bayern Munich this summer on a free transfer, replaced Benjamin. Somehow Hamburg was no in charge of the match again, but they weren't able to create any danger. Especially as Subotic and Santana were standing rock solid most of the match. It sounds strange but Dortmund didn't have any problem to keep Hamburg away from their goal. In minute 66 Jürgen Klopp realized it was time to secure the narrow lead. He took Kuba off the pitch and brought Tinga. And Tinga was the one who started some nice counter attacks. The biggest chance was in minute 78 when Tinga was up and away down the right wing. He easily entered the box and had so many opportunities. Bu instead of firing a powerful shot or serve Valdez on the left side, he played a lousy pass that was wide and out of reach for Valdez. And as you now: There is a saying: If you don't score, the opponent will for sure. A long ball from midfield headed for the right corner of Borussia's box. Weidenfeller unnecessarily left the goal and cleared the ball half-hearted. Olic picked up the ball and played a high pass direction call. Guerrero missed the cut-in luckily and Santana somehow managed to play the ball with his heel. The deflected ball hit the bar and was finally cleared by a BVB player. 2 minutes from Tinga had another fine chance. His second counter attack was more or less a copy of the first one. But again his low cross was too imprecise and so this one was wasted, too. Nonetheless we had another counter attack in the dying seconds. Kevin-Prince Boateng stormed down the left wing and was fouled by Gravgaard within the box. Referee Kempter didn't hesitate and pointed to the penalty spot. And as you all know, we have one of the best penalty takers on our roster. And of course it was no problem for Alexander Frei to score - 2-0 for Borussia! Only second later the match was over and Borussia Dortmund made it 5 in a row.

It was all but over after the final whistle. What happened than very rarely happened before. It might have been the first time, it definitely was something Westfalenstadion had not experienced in a very long time. A mighty roar shook the stadium when not only the Suedtribuene shouted "Der BVB Ist Wieder Da" (BVB is back again) for some five minutes. Afterwards the team sat down to celebrate with the fans. Times have changed in Dortmund. Whereas you would hear a boring "Humba" during the first couple of matches this season our winning streak also brought some renewed faith in our songs, something that made us "the best fans in the world" (Norbert Dickel, before every match) some 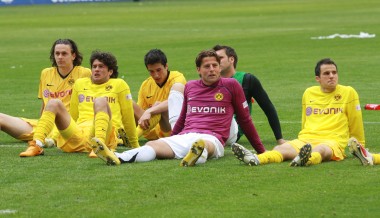 fifteen years ago. Old classics with new lyrics. Take the new "Humba", our very own take on it. It goes something like this "Ballspielverein Borussia Aus Dortmund, Wir Folgen Dir Egal Wohin Es Geht, Auch In Recht Schweren Zeiten, Werden Wir Dich Stets Begleiten, Borussia Wir Sind Immer Fuer Dich Da (Team Gets Up, Jumps Up And Down)... Shalalalalala, Shalalshalalala" (Ballspielverein Borussia From Dortmund, We Follow You Wherever You Might Go, Even It Not So Good Times, We'll Always Follow, Borussia We're Here For You Forever, Shalalalalala, Shalalshalalala). After a lap of honor in front of a still near to capacity ground the pitch emptied but the fans wouldn't leave. They were singing "Ohne Trainer Gehen Wir Nicht Nach Haus" (We're not leaving without the coach). So after more than a quarter of an hour Juergen Klopp entered the stadium again, walked towards the Suedtribuene and celebrated with his fans. "This was my way of showing respect. What the fans are doing is incredible. I'd rather not come out ever y week like I did in Mainz. But today I had to take a bow", said Klopp afterwards.

The caravan will travel down the A45 next weekend to stand up for Borussia in Frankfurt. Again some 10.000 supporters are expected. We have sold all of our 5.000 tickets but with a lot of fans in the Frankfurt area we should be able to nearly double the amount. We are living in a dream right now, may it last for five more games

Surely a deserved win. Dortmund was not in brilliant form but nonetheless didn't allow much chances for HSV. Somehow it was visible that the Hamburg players were maybe still a little bit tired of the Wednesday match against Werder Bremen. Nonetheless Dortmund controlled HSV's offence and were stone-cold in front of the goal. The tragic is that all the teams around us, like Stuttgart, Sch*lke and Hertha BSC Berlin win also so that we are still 5 points behind a Euro League spot.

Jürgen Klopp: „From the beginning of the match everybody could see that HSV can really play nice football. But it was also clear that they were tired after 120 minutes on Wednesday. We fought really hard and got so into the match. In the end the win was not undeserved 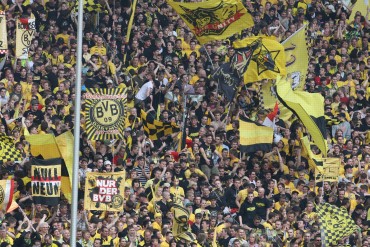 Martin Jol: „It is strange somehow when you have to make compliments to a team that has just lost. We had some nice approaches in the first 20 minutes. Had we scored then everything would have been easier. BVB played that very clever."