Dede: Dortmund against Schalke- that?s odium but with respect 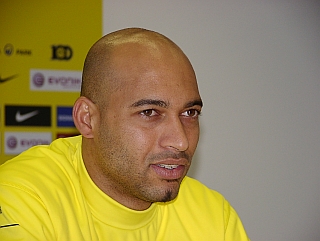 Far too long he was injured, precisly half a year. Now he plays for Borussia again as if nothing happend: Leonardo de Deus Santos, in short called Dede. Before his comeback in front of the fans he took the time to talk to schwatzgelb.de.

schwatzgelb.de: Leonardo, you have now almost been 11 years in Dortmund. Had you imagined to stay in Dortmund for this long? What were your thoughts back then and how did the development go that lead you to staying here for so long?

Dede: Back then it was not easy to leave my homecountry Brazil. It is like that for all Brazilian players. My father had said that I should not go to Europe for only one year like many other Brazilian players do but play football for at least two or three years here. When I had first played in the Westfalenstadion I had immediately felt that this is something special. The way the audience identifies with the club, this way I have identified immediately with Borussia Dortmund and the fans as well. This feeling got stronger with every game and every season, there were only positive things in Dortmund. I am just happy to still be playing here today. Furthermore I have accomplished real good performances on my position in the first three years. Of course there were problems, too. First the food brought difficulties for me, then my family was far away and I did not know the language. The internet was not as common as it is today and I had talked to my family a lot on the phone. The bills were very high- a difficult time. But every time that I went to practise I forgot about all that and had a real good time. Let alone playing. It got better every year.

schwatzgelb.de: For many years you have been helping new players to settle down in Dortmund. Current examples are Santana and Tinga with whom you spend a lot of freetime. Did you have an attachment figure back then who had helped you as well?

Dede: No, there was nobody. That definetely was hard. But thank God that is done. Later on the other Brazilian players and 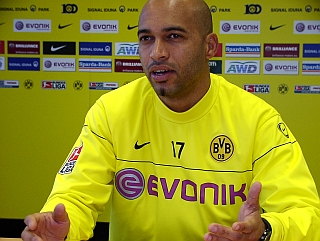 foreign players had come. They had always called me and had asked me all sort of things. That was a nice phase where I could help them.

schwatzgelb.de: What was your idea of career like back then when you were 20 years old, how did your future plans look?

Many factors played a role, and things do not always work out the way you imagine. When I was a child I definetely wanted to be a professional player at first and play for a Brazilian team- I played in Brazil for ten years- achieve good performances to switch to a great team in Europe later on. Eventually I got a pre-contract with Leverkusen, but fortunately that did not work out ( laughter)

Dede: Yes, of course. The stadium, the fans, the mood in Dortmund simply fit to me, to my type. Here in this team people are passionate as well as close, people do not only go to the stadium for 90 minutes.
By now I have gone through everything, good times and bad times. Still, I can only thank for everything that I have experienced here. In soccer, there are not only good times. Thank God everything went well back then. In the bad times I felt how much strength there is. Among the fans and the team. That is a nice thing. When there was the big crisis in the team and many players did not want to continue, I immediately decided that I would go that way with Borussia. This decision was for me not easy for me as well. Today I am glad it went this way.

schwatzgelb.de: One more thing concerning your family. What are your brothers doing? Leandro for example played here for a while as well before he went back to your old team Atletico Mineiro.

Dede: Caca, who played in Duisburg back then, plays for Aalborg in Denmark by now, this evening he actually plays in the UEFA-CUP against Manchester City. For our little brother we are looking for a team in Europe right now and unfortunately Leo does not have a team at the moment. Those were the nicest days of my life anyway, when I could walk into the stadium in the same dress as my brother did; I was as nervous as at my first game in Dortmund, aber happy as well. 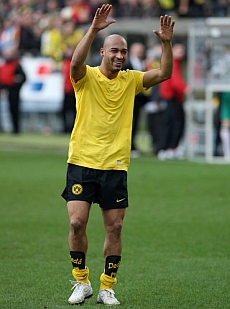 schwatzgelb.de: Do you still watch the games of Atletico Mineiro on a regular basis?

Dede: Definetely. At home I always keep track of the games on TV or on the internet. I played there for ten year and it is my team as well, I had a good time there. The people there still know my name and often ask me whether I would like to play there once more. But then I say that I am very happy with Borussia.

How should I say, it's a bit harder. The people in Brazil are showing many emotions when they visit a football stadium. In Germany, between Dortmund and Schalke the people show more respect. Yes, the fans do hate each other but with respect. Like this: They hate the Schalkers but there is absolutely no need to knock them down. This is the greatest difference to Brazil.

schwatzgelb.de: Before you joined BVB, Dortmund had just won the world cup against Cruzeiro. Did this influence your decision to come to Dortmund?

Of course, Borussia is a great club and also very famous in Brazil, in my hometown anyhow. You will find lots of BVB shirts there. If my parents or friends go to the stadium they are always wearing a Borussia shirt. Also because they want to annoy the supporters from Cruzeiro, our rival who lost the world cup finale against Borussia. All in all the world cup means a lot more to the people in Brazil than in Germany. The significance of the world cup is similar to the Champions League in Europe. All people visiting me here in Dortmund are always entering Borussia's office, take a picture of the world cup to annoy the Cruzeiro fans at home. Even today after such a long time. (Laughter) 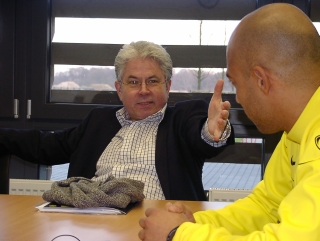 I remember the world cup finale in Tokyo. Our opposing Brazilian team arrived 10 days before us and on matchday Michael Zorc said: "Hopefully it won't be a disgrace for us!" For Borussia's Brazilian Julio Cesar the match was a really great event, comparable to the Champions League finale. And to our big surprise Borussia won the world cup finale. For Julio it was a celebration as he would have become winner of the world cup.

Dede:Brazilians always have a deep respect regarding cups and titles. Every win is a triumph.

schwatzgelb.de: As an international you played only once for Brazil. Isn't it a little bit sad for you not to play more often for your homeland?

Dede: Definetely not! It's not a "must" for me to play as an international. Besides I played for several times in Brazil's international teams. At the Olympic games I played for the "below 23 years"-team but due to an injury the match was finished for me after only 5 minutes. I was twice a member of Brazil's squad and played once. But that's not the main thing for me. For me it's more important that my club is totally satisfied with me and on the other hand I am totally satisfied with my club. If there will be more, of course it's fine.

schwatzgelb.de: Up to now you played 293 games in the Bundesliga. Bosnian Sergej Barbarez played 330 matches and is currently the foreign player with the highest number. Is it significant for you to be at number "1" maybe next year?

Dede: I've read about it and surely it would be fine. But I'm not such an individualist to take pride in those facts. The performance of the team is much more important for me. And if the team takes a positive development the rest will come more automatically.

schwatzgelb.de: Many of our readers asked what are your personal goals after your career as a football player. Also many of them would like to see you in another function working for Borussia. Your contract will end in 2011 when you will quit from active football. What will happen next? 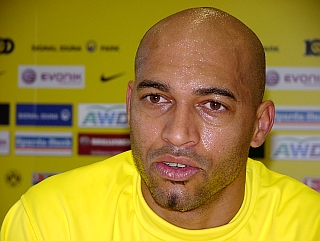 Dede: My initial plan was to play football until the age of 33 and to deliver high efficiency. These were my thoughts when I arrived in Germany. Sadly I was injured for half a year. Now I will make all efforts to reach my optimal shape and I will try everything to climb with Borussia in the league until the end of my contract. If things will turn out positive we can discuss a possible extension of my contract. But that's not only up to me. My intention is to prove that I'm able to continue with playing football on a high level for one or two additional years. Until then I will do my best and maybe the club will ask me to stay in Dortmund for another one or two years. (smiles whimsically)

Working as a scout for Borussia would be a great job for me. Giovane Elber is doing it for Bayern Munich. But never in my life I will work as a coach, I am too natty for such a job. (resounding laughter in the round). Also I can't imagine to work as a manager .

schwatzgelb.de: Did you notice that people, here in our forum, counted the days from the day of your injury until your comeback?

Dede: Yes, these people helped me a lot. Also the club and all Borussia fans. When I returned into the Westfalenstadion after my surgery and I saw all these posters including wishes for my recovery it was very impressive for me. When I am talking about it - it's difficult to explain I only can say "thank you". I will never forget these pictures and I will do everything to give back something.

Part 2 of the Interview: