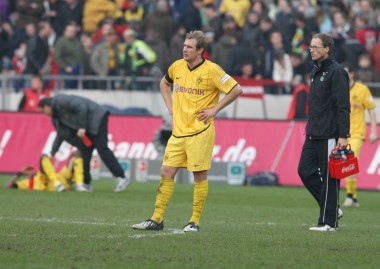 ....we have managed to accomplish another tie. It is still obscure whether this is a curse, bad luck or simply sheer incapability to maintain a lead when it is given. However, the way Borussia Dortmund presented themselves throughout the most post parts of the game in most parts of the team, spreads hope that these four goals equal the good way they are on in order to establish continuous effectiveness.

There were a few changes on both sides with Hannover's coach Hecking having to replace two players due to injury. On Dortmund's side Kehl was able to play again after his suspension, leading into Kringe having to take place offside of the field. Along with him Lee got a break and Owomoyela took over the right side. In the offense, Frei received another chance and Zidan hat to step out. Both teams had a defeat in the back (Hannover 5:1 against Bayern, Dortmund 2:1 against Stuttgart) and were eager to prove themselves and show some longing for stepping out of the nowhere land of the table.

The game started rather positive for us, with Valdez having the opportunity to score the first goal after only three minutes. Trying to lob the ball across the keeper, he failed and the ball did not land where each one of Dortmund's support had hoped for it to land. A start with an early goal was something that seemed to be exactly what Dortmund needed after the long drought of the past games, however this day seemed again to not be the day for it. On the other side of the field, a mistake by Santana gave Hannover's Bruggink the chance to score for his team, however, Weidenfeller saved us and so the score still was 0:0.
In the 17th minute though, loud and angry screams on our side. Hannover's Tarnat threw Nuri Sahin off his feet after a rude 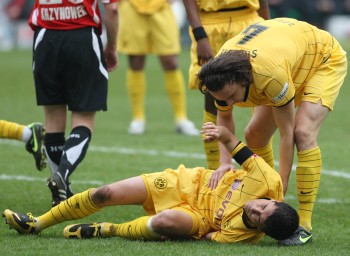 attack, resulting in Sahin being taken out of the game due to his injury and Kringe entering the game. While many of Dortmund's fans probably already thought about how to hold themselves back and not break out in loud swearing as soon as Kringe would have the ball (oh how wrong we were) there was still a penalty shot to make, a task for, of course, Alexander Frei. Usually heading the ball into the left corner of the goal, where Hannover's keeper Enke also decided to jump, he shot the ball into the upper right corner and scored. 0:1 for us. Yes! And of course there was still another player in the game. Florian Kringe. That Kringe? Yes, exactly that one. In the 27th minute the score would say 0:2 for us. Because of who? Exactly. Florian Kringe. But let's take a few steps back. On the right side Hajnal had passed the ball to Tinga, who had kicked it onwards to Valdez, who managed to service Kringe, who kicked it into the goal from 15 meters distance. An actually nice combination. And 0:2 being the score after not even 30 minutes? That seemed to be more like a dream than reality, especially having scored two goals already while we have managed to only score 4 goals in total throughout the second half of the season up to this point.
Dortmund was now the balanced team on the fiel and managed to determine the game solidly. Unfortunately there is such a thing called corner kicks. In this game they would prove themselves to be the devil himself for our defense. In the 42nd minute Hannover's Stajner managed to sneek his way through Dede and Tinga and also Weidenfeller did not look particularly well in this situation, while kind of flying past the ball. The score now: 1-2. Some fans probably already felt and smelt and sensed something called "tie".
But until then, it was halftime. Time to recover from Hannover`s goal and get the mind straight in order to continue where they had started at the beginning of this game.

Moving on to half two, by now every fan was probably provided with enough beer and food for both mind and nerves, so that the game could continue. And it did. With Hannover scoring another goal. Who was talking about about the word "tie" earlier? In the 49th minute of the game Bruggink shot a corner kick. If somebody now says that one should learn after one mistake, please be reassured that this is not the case. After Dortmund's defense had already looked out of the place after the last corner kick that lead to a goal, this time should be not any different. Weidenfeller, again, sailed past the ball which landed directly in the goal. No other player involved? No other player involved. Tie. Yawn 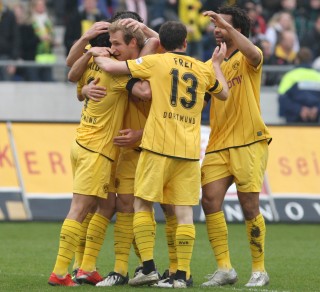 Luck was on our side when Hannover's Rosenthal only hit the goalpost in the 56th minute of the game. Would Dortmund really be so, well, stupid and walk off the field without points again? It kind of looked like it. But please be reminded. We still had a Florian Kringe on the field. For those who may laugh now, be introduced to the 62nd minute of the game where Florian Kringe kicked the ball into the goal. Again. 2:3 for us and joy on our side. This joy should be enhanced in the 65th minute when Alexander Frei hove the ball into Hannover's goal from about 30 meters distance. What a goal. What a game. Hopes where high again. Dortmund couldn't possibly let this lead slip out of their hands. Again. One would think.
15 more minutes passed and Dortmund dominated the game. Only ten minutes left. Now nothing could go wrong anymore, could it? With only ten minutes left? Well, in the 80st minute Hanke managed to head the ball into the goal after- I do not dare to say it out loud- a smiliar evil thing that caused Hannover's goals number 1 and 2. We got to the point where viewers in the movie theater get in a dramatic action film. The victim is in the hands of the evil antagonist. Everybody is waiting for the super hero to save her so that they can live happily ever after. In movies it somehow always works. Who wrote the crappy script of this football game? Why did Valdez not manage to redeem us and hit the goal shortly after the 3:4. That script writer should be tarred and fethered.
The game ended the way Dortmund's games seem to end most of the time throughout this season. With a tie. Subotic threw Forssell off his feet in the penalty area. Forssell did not let this chance be taken away from him and his penalty kick hit the goal. 4:4. 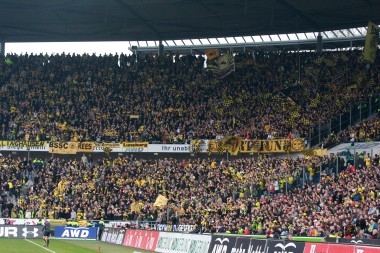 Why and How??? Those two words pop up in every mind of Dortmund's fans at the moment. While we have only scored 4 goals in total throughout the second half of the season, we today managed to score 4 goals in only one game. Taking over the lead twice with two goals ahead. Still it is not enough. One beginns to wonder how many goals have to be shot in order to finally walk of the field as the winner with three points in the back.
Emptyness is what was left on this day. The positive feeling that the team had created throughout the game by fighting for the ball and actually managing to kick it into the goal, was killed through unneccessary goals against us.
Now another tough game against Bremen is waiting. Let's hope for the best.