Borussia in Bochum - more than the "little derby" 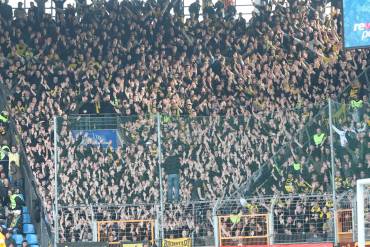 Borussia fans are in high spirits during the last weeks! A serial of three wins keep Borussia's chance for the UEFA Cup alive and above all we saw attractive matches of our team. For many of us it could be a happy omen regarding Borussia's match next Saturday vs. VFL Bochum.

Bochum, a city with 380.000 inhabitants, hit the headlines during the last months with annoying news. Beginning with the closure of Nokia's factory during the last year, the future of automobile manufacturer Opel's plant in Bochum as part of General Motors seems to be uncertain. Also companies like Thyssen/Krupp and BP, both located in Bochum announced that a reduction of staff could or will be options for the near future. All in all it's not a good development for Bochum's economy.

But let's change into football:

As long as I can remember our matches against Dortmund's neighbouring city Bochum were always called the "little derby". Only the "little derby" compared to our matches against a suburban team from the bit more distant Gelsenkirchen named "Sch...e". At first view a situation which seems to be a little bit strange, but it's VFL Bochum's fate to be not only in the geographical middle of two teams with long tradition and history: VFL Bochum's club history doesn't include any remarkable titles. Founded in 1938 the club relegated for 5 times into the second league. Greatest successes were the cup finals in 1968 and 1988 and participation in the UEFA cup matches in season 1997/98 and 2004/2005. Only a number of 5.000 club members compared to 40.000 club members of BVB are proof enough for Bochum's relative small impact in Germany's football scene. 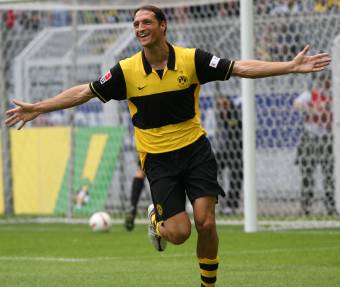 In the league Bochum is currently in position 14 and with 28 points five points ahead of the relegation zone. Not a very comfortable distance, so Bochum's 3:0 win last week in Hoffenheim took many experts by surprise. 3 goals of Stanislav Sestak from Slovakia secured the unexpected result. But on the other side striker Joel Epalle left the green very early and had to be substituted with a broken cheek bone. It's sure that he will not return for the match this Saturday - a handicap for Bochum. But we all know VFL coach Marcel Koller's alternative: Former Borussia striker Diego Klimowicz joined Bochum's team in the beginning of the second leg this season. In interviews during this week he complained about his former coach - "I was never a part in Jürgen Klopp's planning and that's the reason why I left Borussia". So it's imaginable that the match against BVB will not be a "normal match" for Diego Klimowicz. Not only a match against his former teammates, also against his former coach. So let's trust in the knowledge of Borussia's defensive and they hopefully will give him the answer on the green.

Premises for Borussia are nearly overall positive. With the exception of Mats Hummels, and maybe Young-Pyo Lee (struggling with tendon problems) BVB coach Jürgen Klopp can provide nearly his best team for Saturday. Borussia's defensive will be probably the same as in the match against Cologne. In the midfield 7 players apply for a job on Saturday: Kehl, Sahin, Blasczykowski, Hajnal, Tinga, Kringe and Boateng are able to play. After recovering from his goin troubles striker Nelson Valdez is currenty striking with stomach flu. It would be sad if the successful duo Valdez / Frei will not be able to continue their good teamwork on Saturday. But there is enough hope that Valdez will recover until Saturday. If not, Mohamed Zidan could be the substitute.

Looking at Borussia's results against Bochum raises mixed emotions. In the first leg the result of Borussia vs. Bochum was 1:1, one of the 13 draws Borussia gained this season. But Bochum is with 10 draws not far behind us. And for all the people forecasting a win for Borussia on Saturday, please pay attention: Borussia's last win in Bochum's stadium has been 10 years ago! In the meantime there were 2 victorys for Bochum and 4 draws. Really not a positive balance for Borussia! 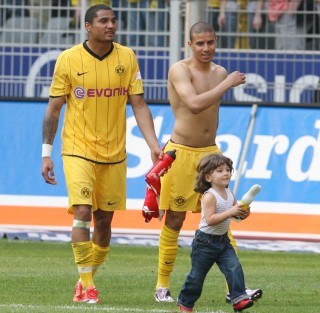 Borussia's gap to the UEFA cup position is currently 5 points and beside BVB also Sch...e, Hoffenheim, Hertha, Stuttgart and maybe Leverkusen apply to get a ticket for the European cup. A defeat in Bochum could destroy all our European dreams, a draw would mean stagnation.

With regard to our match in Bochum Jürgen Klopp's statement should be the best guideline for Saturday: "I'm not interesting in the statistics with all these former results against Bochum. This all happened before I worked for Borussia. Our goal is to crown the season"

There's nothing more to be added.