Borussia finally kick it off in 09 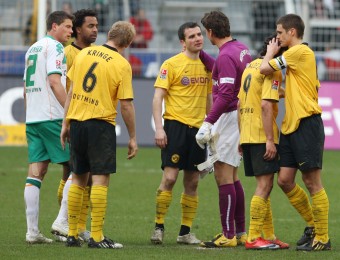 Saturday afternoon. 5.23pm. It took Borussia less than ten games to start 2009. After what had been five draws and three loses in the first eight matches of 09 Borussia finally took all three points. A well deserved win against a Bremen. A Bremen that is nowhere close to their last couple of seasons this year.

A sunny afternoon, the first day of spring. Fans sporting their latest outfit after a long winter. Walking up to Westfalenstadion finally meant seeing the colors of our choice again. Black'n'yellow the dominant colors, some supporters sporting the fab away dress. A good reason to await the end of the season as Borussia will switch outfitters and this one should be in the bargain bin soon enough. But enough of that and on to the game

Werder Bremen qualified for the quarters of UEFA-Cup with a 2-2 at St.Etienne and 3-2 on aggregate on Wednesday and also were coming to Dortmund on the back of a 4-0 win against VFB Stuttgart, who themselves are still up among the candidates to win one of the weirdest Championships in a long time. Bremen had to do without Naldo, Frings and unlucky Swede Rosenberg and brought in Tziolis, Almeida and Pasanen. Borussia coach Jürgen Klopp benched Sahin, who after last week's monster tackle by Hannover's Tarnat was still not a hundred percent fit to play. Florian "Brace" Kringe replaced him.

And so a match kicked off that besides all of the relegation and championship excitement on the other ground could have easily been forgotten if it hadn't been for the two clubs that have caused a lot of excitement over the past two decades but now both are stuck in middle of the league. But a glorious past does not guarantee an interesting match. Most of the first 45 minutes saw both teams with a lot of problems pushing the game into their direction. A free-kick by Alex Frei, back in the starting 11 after his brace in Hannover, and a Kehl shot cleared by Pasanen on our side and a huge chance wasted by Pizarro created from a Özil-cross was all the match had to offer. Time to talk about more important things on the stand. Where to find a seat next season or go back to Suedtribuene? Can Klopp inspire Dortmund to catch up with the big guns of the late noughties? A soup or a Kebab during half time? Was that song those people performed before the match a way to early Aprils Fool's Joke? Move seats, Yes, Soup, A Bad Joke!

Half time. We were on our way to another, the 14th draw of the season. Cologne in 91/92 and Kaiserslautern in 96/97 currently share the record with 18 draws in one season. The former with 38 matches played, the latter got relegated. Relegation? Something we do not have to fear this season even with the prospect of breaking or equalizing the record. With now 25 matches into the season Borussia is also the side with the fewest loses. Strange times indeed!

And suddenly everyone was awake. Maybe the shock of hearing that song "Steh Auf Fuer den BVB" (after Right Said Fred's - does anyone remember those twins of horror? - ‘Stand Up For The Champions') took 60 minutes to digest or maybe it had kicked in. A roar like in the old times welcomed both sides back on the pitch. The match gained speed. For a start Bremen where denied by a determined Weidenfeller fist. And then Hajnal, after not being seen during the first halft, slowly took command of the midfield. He directed the match with both Valdez and Frei working their asses off upfront. But it was not until Ref Knut Kircher just after 60min decided to play on after a Valdez Prödl infight that the atmosphere exploded. Westfalenstadion now was a boiling pot and with every ball touched by Bremen or decision against Dortmund the roar grew louder. After 65 minutes comeback kid Dede stole the ball on the left side, found Hajnal who passed on to Valdez who was touched by Boenisch. Frightened Kircher had no choice but to point towards the spot if he was to leave the ground alive. Switzerland skipper Alex Frei put the penalty behind Bremen goalie Wiese. It was his fifth penalty of the season, all of them finding the back of the net. Would this mean Borussia's first win of 09? Sure thing! No furious attacks by Werder. Only one good chance by Claudio Pizarro. Still the ball did not make his way past Weidenfeller, who saved the shot from six meters with his right foot. The late highlight of the match was yet another comeback. Polish wing wizard Kuba made his first appearance this year, replacing Alex Frei who was substituted to standing ovations from the fans.

A sunny Saturday afternoon just as you like it. Three points, Dede back in the team, Kuba closing in on the starting 11, Frei scoring yet again and no more relegation fears if there ever were some. With 37 points we are in the middle of nowhere. Only more than a handful of wins in the remaining nine matches could bring us near Europe, only no win in the remaining nine matches could see us dropping into the last four spots. After the World Cup qualifiers Borussia travels to current leaders Hertha Berlin and over the easter weekend awaits FC Koeln at home. Let's see where this will take us.