The day after Valentine day: Borussia against Energie Cottbus: 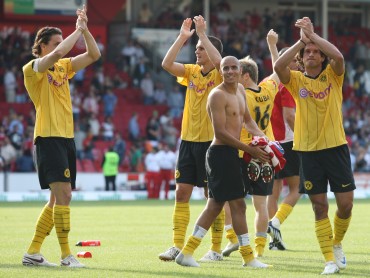 For the most people Feb 15th will be a normal Sunday - but for us it's the matchday of Borussia against Energie Cottbus in our Westfalenstadion! And after Borussia's defeat against Bayern Munich our BVB stands at the crossroads on Sunday: Will Borussia climb back near to the UEFA Cup positions or stay in a Bundesliga mid-position?

Well! Sometimes it's not so easy to describe Borussia's opposing team or to write something about their history or their performance! Yes indeed, and such a case is Cottbus!

Searching Cottbus on a map you will find the 100.000 inhabitants covering town in Brandenburg roughly in the middle between Berlin and Dresden. In times of the former German Democratic Republic the area around Cottbus was a main supplier of coal and energy. After German unification with extensive privatization Cottbus changed into a center for services, sciences and administration. Also many enterprises recognized that the direct proximity to Poland is a chance to participate in economic growth in this part of the European market.

But that's enough demographic and economic data, let's come to Energie Cottbus' football team: It's a sad fact for Cottbus fans, but it's reality: Cottbus never played a remarkable role in German football as measured by titles. Cottbus played from 1999 - 2003 in the German Bundesliga and after it's relegation the team returned in 2006. Since that time Cottbus is always struggling against the next relegation.

Results of BVB matches against Cottbus were all in all positive. nine wins, one draw and only one defeat. But especially the draw in season 2002/2003 is in bad remembrance for Borussia. After Tomas Rosicky's goal, Cottbus' Timo Rost made the 1:1 and that was the introduction to our decrease in the European cup: Due to that draw, BVB ended the season in position 3 and lost the qualification for the Champions league against the Belgian team RSC Genk. Later on Borussia dropped out in UEFA Cup against Sochaux from France. A really high price for the draw against Cottbus several months earlier!

But let's leave that annoying part of BVB history and let's come to presence: 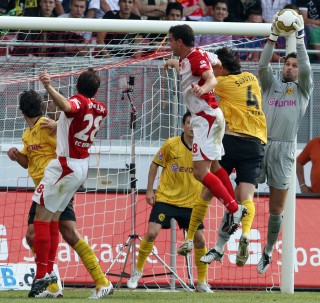 Comparing Cottbus' current team players with Borussia's shows a clear advantage for Borussia!. But we all know that's only theory! Although scoring goals (only 15 until now) is not a strong point point of Cottbus, players like Jelic, Rangelov, Sörensen or Skela are always good for at least one goal in every match. Timo Rost is an experienced midfielder and goalkeeper Tremmel, the successor of the legendary Piplica from Bosnia-Herzegovina does a solid job in the defensive of Cottbus. Last week Energie Cottbus scores 3:1 against Hannover and improved from position 17 to 15. For sure, Cottbus will fight hardly not to drop down into the relegation zone again.

Now, what we can expect on Sunday? Forecasts are always difficult but probably we will see a mostly defensive acting team.of Cottbus, which is typical for Energie's away games. So it's likely that Borussia's forwards will have a hard job on Sunday evening in our Westfalenstadion!

Let's hope the best and let's start into the match with a concrete intention:

One year ago Gemany's chancellor Angela Merkel became a honorary member of Energie Cottbus - but that should be no reason to do her or the Energie team any favor!

That means no belated valentine presents for Cottbus on Sunday!