Business as usual - No Berlin in Berlin 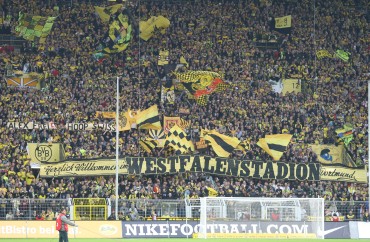 You have to love those games. After what had been a disastrous week with to set-backs against Udinese Calcio and Hoffenheim Borussia welcomed Hertha of Berlin for yesterdays midweek cup-clash. A year after some 40.000 saw Borussia do the groundwork against Eintracht Frankfurt for an unforgettable day in Berlin this April only 30.012 entered Westfalenstadium. They saw a team wanting to avoid a worst case scenario, trying to keep their name on the sheet in at least one more competition. They succeeded!

Jürgen Klopp promised a big fight and a big fight we got. The new manager had changed the team on six positions. He benched Klimowicz, Kringe, Federico, Rukavina, Sahin and tall Brazilian defender Santana - some of them injured, some of them out of form, some of them lacking everything against Hoffenheim. Former Spurs-player Lee replaced Rukavina as right back, Kovac - joining Subotic as center back - made his first appearance in the starting 11 this season and so did German U21-skipper Kruska, who with Tinga and Kehl was designated to take on the fight. Tamas Hajnal however was moved up front a bit into the Nr.10 position. And finally Alex Frei led the attack again accompanied by Nelson Valdez. Hertha BSC Berlin had to do without clumsy Simunic (red card) and Kacar. The capitalsiders haven't reached a cupfinal in their home stadium - the Olympiastadium in Berlin - for a lifetime and said Uli Hoeness' little brother: "We are destined to reach the final". Not this season, my friend 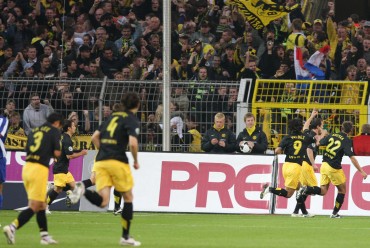 Borussia picked up speed fast, Robert Kovac shot wide from the six yard box after only two turns of the clock. Soon afterwards Valdez picked up a long pass from Hajnal and entered the box. Kaka, who yesterday had nothing to do with the other kid called Kaka, pushed him and Refeere Weiner looked towards the sideline, signalized no foul but when the ball crossed the touchline a different story unfolded. Weiner pointed his finger on the penalty spot. It could have been because in old Hoffenheim fashion everyone mumbled: "Son of a b**ch - penalty!" and unlike Hopp Weiner was impressed? You just never know. Frei send Jaroslav Drobny into the wrong direction and his shot hit the back of the net. 1-0 up after six minutes. Borussia now dominated the match, Valdez working hard as always played a few crosses into the box but never found a Dortmund player. Now Subotic did not have the best day of his still young career. Clever Pantelic involved him in a running duell. The Serb focused on the ball and our young multinational boy focused on Pantelic, who with a few zig-zags was suddenly in front of Subotic. Weidenfeller waiting for Subotic's header at the spot was no obstacle for the following lob. 1-1! Our young guns now acted extremly unsettled. A Subotic hammer from way outside the box flew past Drobny and past the goal and again Subotic made way for ex-Liverpool-no-show Voronin. His shot from just inside the box hit the bar and was eventually cleared by the Dortmund defense.

Nothing much happened after half time. A few chances on both sides saw both goalies get the better out of the attack. Nuri Sahin replaced Tamas Hajnal and inspired the Borussia for a few minutes but it was Robert Kovac that set up the only chance for Alex Frei. The Croatian dribbled past a few Hertha players and neatly passed through the defense. Drobny cleared the shot from 10 yards past the post. On the other side Hertha, now playing towards the Suedtribuene were denied by Weidenfeller on one or two occasions. They looked stronger and set up a more matured match. 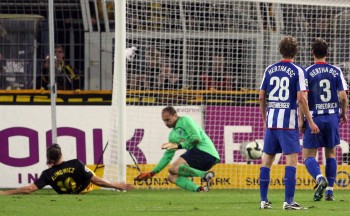 Floodlights directed both teams into extra time. Kringe replaced Kruska. Castrop-Rauxel born Kruska played the match he can play. A good physical presence in defense, destroying Hertha's weak left attacking side but most of the time unlucky with his attacking style. A few shots during the first half went way past the goal. It was good to see him back on the pitch. The atmosphere was heating up, antiphons between Suedtribuene and the adjoining corners. The match now turned into an thrilling cup match with chances on both sides. And when super-sub Diego Klimovicz entered the pitch for exhausted Valdez the flame had already been lit with chances from Kringe and Frei. A Sahin free kick 40 yards from the goal found Diego's long leg and in it went. 2-1 up after 103 minutes. "What a damm free kick", said my seat-neighbour but stopped midway through his abuse to fall into my arms. The second half of extra time saw the capitalsiders attack furiously and headless. Alex Frei had some chances to score off the counter-attack. Lacking match-practice he did not score. And instead in the dying minutes of extra time a series of corners were a thread to our defense. Even Drobny stood inside our box waiting for the ball. Someone Dortmund got a leg between every shot and Ref Weiner stopped the clocks after 121 minutes. 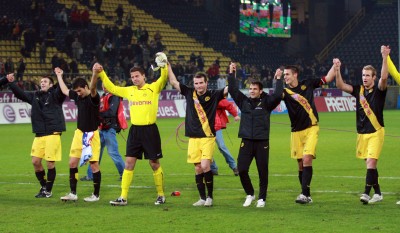 A cup team after all those years?

Borussia overwinter in the DFB-Pokal for the second time in a row. Have we finally become a cup-team? The round of the last 16 will take place in late January, the draw will be on October 5th. There is nothing to wish for but maybe we good old ask good ol' Fortuna for yet another home match and we might as well go all the way to Berlin again. Book your tickets now. And don't forget: There will never be a Berlin in Berlin. After avoiding a minor crisis yesterday Borussia now await VFB Stuttgart on Saturday.