Not too bad at all ? but still no points 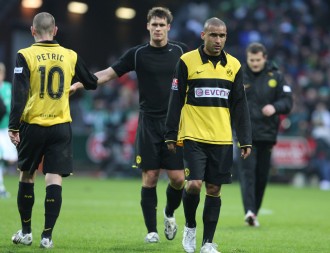 Borussia's gameplay was not stormy, neither in a positive nor in a negative way. There was even a chance to bring back at least one point but a weaker performance in the second half and two doubtable decisions allowed Bremen to keep three points at the Weser.

As for half-time one, Dortmund was a well and equal competitor to Bremen. But let's get step by step: Werder showed some quick combinations the first of which became dangerous in the 7th minute, when Rosenberg gave a sharpe cross from the left side where Kovac's rescue action had almost resulted in an own goal unless Ziegler saved it.
Shortly after this chance, it was Özil's shot which was saved again by Ziegler who would have had pretty much to do that afternoon. But afterwards there was the ultimate chance for Borussia to gain the lead: Valdez played a fine ball to Kuba on the right wing who gave a perfect low ball into the penalty area where Mladen Petric directly finished - but Ms. Wiese had on of her extraordinary moments and somehow managed to master this try (18th). Be sure: If Mladen had scored the match would have been a different one, at least as far as the result is concerned...
After ten minutes of lousy entertainment it was Werder who came up with their biggest chance: A poorly defended corner found its way to Boenisch who directly gave it a try with his left foot. Somehow Klasnic got it but Ziegler terrifically parried (28th). But don't worry: We were still on track which was more or less due to Mladen's efforts: Being a real striker he anticipated Mertesacker's header back to Wiese. Petric rushed to the ball and overbeared Wiese with a nice lop - but Mertesacker got back on his post and cleared the situation. (38th). 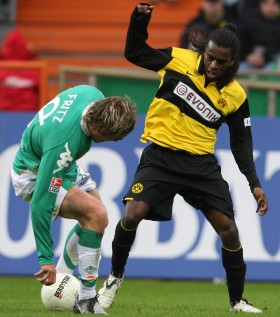 You've got to understand: We could quite well go the pace Werder went in the first half. But, as consistency is demanded in Dortmund, we need to destroy all this good hope: Aaron Hund somehow conquered the leather within the penalty area and served Rosenberg (who was offside!) and duped Rukavina by using his heel and scoring (45th).

If you'd expect a stormy Borussia being dominant and opting for the equalizer: Forget about that! It was just Mladen whose free-kick unfortunately hammered onto the bar (49th). Within the next 20 minutes Werder had numerous chances to make sure that the 3 points would remain in Bremen and it was again Rosenberg who revealed our main weakness: the defence. Rosenberg (not known for excellence in dribbling) duped Amedick and Kruska (who came in for the injured Kuba and hat to leave half an hour later) perfectly and finished with a nice shot from 16 metres. The match was done. Thanks Marc Ziegler who saved fantastically against Rosenberg (70th) and Özil (75th) there was nothing more on the scoreboard for Werder. The last 15 minutes were subject to ...well nothing. No need to fight back, to do anything towards Wiese's goal. A poor answer though the first half was that promising!

Okay, we were beaten by Bremen. Okay, Rosenberg scored from an offside position. But: If you want to win against a top team, a good first half will not suffice. There was hardly any fire in the second half. Moreover, coach Doll's strategy looked quite irritating since Valdez was part of the starting eleven while Klimo had to take a seat 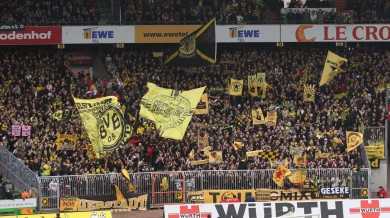 on the bench. In addition, starting with Kuba seemed a bit airy, too since he did not practise regularly in the past weeks. However, it is quite odd that the team did not try to get back into the match in the second half. Finally, we have lost a match that could have boasted us up to places from which Europe was not far away. But we missed it, again.