Wouldn't there be the cup final.... 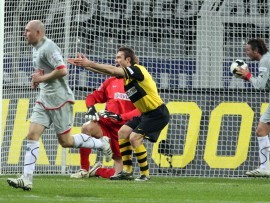 ...we would probably have a new coach by now. After another horrible performance our black-yellow boys lost their home match against Hannover 96 by 1-3. Despite 15 minutes of aggressive play, we lacked everything.

Scenario/Line up
BVB coach once again mixed up our line up. Tinga was missing due to his 5th yellow card suspension and Marc Ziegler caught a slight injury. To the surprise of the BVB supporters Thomas Doll did not rely on Alexander Bader, our back-up goalie, but gave Marcel Höttecke, a 20 year old talent from our amateur team, a shot. In central defence Hummels and Kovac started, while Federico returned onto the pitch as playmaker. Frei was left on the bench and Diego Klimowicz accompanied Mladen Petric. As Rukavina still did not recover from injury, Philipp Degen took his right back position.

First Half
The match needed some minutes to set a first highlight. In minute 12 a long pass found Huszti lurking for the ball in the left half of our box. His accurate volley shot from narrow angle was superbly cleared by our young between the posts. And it was again Hannover 96 that created the next chance. A free kick by Bruggink missed the post by centimetres only. Borussia Dortmund needed until minute 21 when a free kick taken by Mladen Petric was cleared by Hanover goalie Enke and his defence. All in all it wasn't really a good match. Both teams showed clearly why they are stuck in the middle of nowhere. Meanwhile Hannover 96 central defender Vinicius got booked. The tall Brazilian was really in danger of getting sent off as he continued to play rough. Guest coach Dieter Hecking realized that and took Vinicius of the pitch. Frank Fahrenhorst took his place next to Ismael.

It was minute 38 when another free kick taken by Bruggink sailed into Borussia's box. Hanke's try to deflect the ball was not successful but anyway it was enough to irritate Marcel Höttecke. The young goalie didn't lok that good as the ball past him and hit the net - 0-1 for Hannover! And to pile up the mess it took only 4 more minutes to extend the lead. Another free kick was deflected by Valerien Ismael. The ball found Frank Fahrenhorst and the tall defender somehow got his head to the ball. The curling ball flopped just above Höttecke's hands - 0-2 for Hannover! With an enormous whistling concert the Borussia players were sent to the cabin. 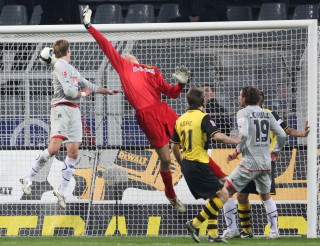 Second half
Dortmund started a little bit more aggressive and had more ball possession than in the first half, but it took until Alexander Frei came onto the pitch in minute 64, that Dortmund really raised the pressure. And really, only 30 (!) seconds later a powerful low cut-in from the left side by Florian Kringe found Alexander Frei. The Swiss national player took a volley shot and left Robert Enke no chance to clear - 1-2!

Unfortunately Borussia was not able to create many chances. Though they were dominating the midfield, they lacked creativity up front. On the other hand Hannover 96 played some nice counter attacks that made our slow defence not look that good. And indeed in minute 78 a high pass from midfield sent Huszti up and away storming into the box. Kuba tried a last desperate tackle but Huszti was still able to put the ball where it belongs and it was 1-3 for Hannover!

That was more or less the end of Borussia's slight domination. We just weren't able to be any threat anymore and Hannover played down the clock easily. And so the match ended after 90 minutes with a 1-3 loss and incredible whistles from the stands.

Summary
That was another blow to the many BVB supporters all over Germany. Like against Bayern we lacked everything and absolutely deserved this zero-pointer. Anyway, now we have to concentrate on Saturday as we are facing Bayern Munich in this year's DFB cup final. As Bayern Munich will surely end this season on a Champions League spot, we are already qualified for next season's UEFA Cup. 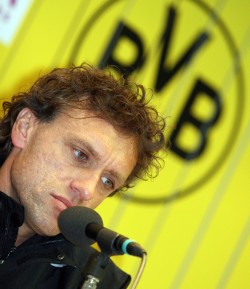 Statements
Thomas Doll: „You could see, that we didn't recover from the Munich match. We were still shaken and served Hannover an easy away match. For me it is now important that the team stands up and shows a reaction. "

Dieter Hecking: „Maybe we should have add a third goal earlier, because when you receive a goal in Dortmund you know that it can become difficult. Anyway there is nothing to critizise today."