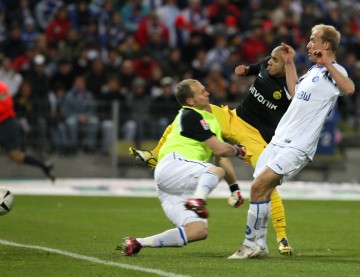 The view on the game was conflicting. Would it take place, would it be cancelled? Weather reports predicted the worst - terrible storms, loads of snow and a freezing cold. Well, it was cold and yes, there was a slight breeze walking around the stadium and one could even count a few snowflakes; the dramatic weather change, however, stayed away and so it was time to tie the shoes and play some football. For Karlsruhe, who had not won since eight games, it was about time to register three points again, Dortmund on the other hand wanted to take the game against Frankfurt up and drive home with three points in the bag.

Jürgen Klopp was lucky that none of the internationals came home with injuries and so he only had to worry about the losses of Kehl who suffered from an ankle joint injury, consulted in the game against Frankfurt and Valdez who injured himself during the game against Frankfurt as well. Mats Hummels however was mended again and moved into the the inner backfield next to Subotic, Sahin took over Kehl's position while Kringe bore the office of the team captain and Zidan started as a striker aside from Kuba.

First Half
Still spoilt from the game against Frankfurt the expectations of Dortmund`s fans were high, the beginning of the game though proved that it was not the general rule that it would be as easy as it was against Frankfurt and so the first minutes it was Karlsruhe who played the melody of the game. Dortmund acted rather passive and the offensive moves consisted of long and high crosses, shot from the defense far into Karlsruhe's half of the pitch, hoping they would find their way to Kuba and Zidan.
However, the first dangerous ball of the game found its way onto our goal line where Weidenfeller had to save us from an early goal after a corner kick from Iashvili which landed on Aduobe`s head in the 8th minute. Another 10 minutes later Karlsruhe's Freis tried to hit the goal but missed by only a few inches. Dortmund who grew a bit stronger over the last minutes prepared the right answer for Karlsruhe. It was Kringe who played a pass on the right side to Hajnal who then put in a perfect cross that Zidan managed to use to score the 1:0 for us in the 20th minute - cheers on our side.
Only a couple of minutes later it was Weidenfeller who again screened us from a dangerous offensive move by Karlsruhe's Celozzi who ran towards our goal from the center on and then tried to hit the goal with a strong 20 meters distance shot. After that Dortmund managed to get control of the game, especially since Karlsruhe operated rather inhibited and cowed. We had the chance to increase the score through Hajnal who stayed unsuccesful against Karlsruhe's Keeper Miller in the 37th minute and Subotic in the 39th minute. After that it was time for some tea or mulled wine or whatever it took to get a bit warmer while the teams took their 15 minute rest. 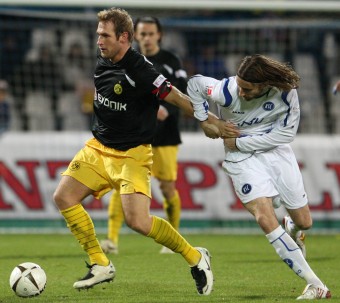 Second Half
Back in the game Karlsruhe improved their game and had the chance to score through Mutzel who did not hit the goal for Weidenfeller paid attention and caught the ball.This offensive move was followed by ones on Dortmund's side when Kuba broke free on the right side, however, missed to bring this offensive move to an end in the 55th minute of the game. A couple of minutes later it was Zidan who could have eased our tension. After Miller had left his goal, Zidan missed to score and passed the ball to Nuri Sahin, who was waiting in the middle of the box, instead. His shot though was parried by Karlsruhe's keeper Miller. The game was way more open now, leading to more chances on both sides. Karlsruhe did not give up and was eager to score at least one goal while Dortmund had to act to not let the three points slip out of their hands.
In the 62th minute it was time to hold our breath since the ball lay in our goal net. However, the linesman attested the scorer to be offside and so it was still 1:0 for us. Karlsruhe got stronger and stronger and it was time that Dortmund found some answers for the offensive acting players of the opposite team. We were still in the lead, however, if Karlsruhe were to continue to play as strong as they did throughout the past minutes, this performance would not be enough.
Only one minute later Karlsruhe's Stindl managed to break free and yet again it was Weidenfeller who advocated the zero. In the 68th minute Kuba had another chance to score, instead he passed the ball to Zidan who missed. It was the 75th minute when Karlsruhe had another huge facility to score the needed goal for a tie. Stindl however managed to hit the ball above the bar from only five meters distance. Karlsruhe tried once again in the 86th minute when Subotic defended the ball with all his might from the approaching Kapllani. After 91 minutes, referee Gagelmann redeemed us from our shivers and the three points were in the bag. 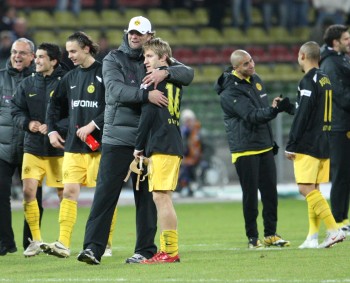 Summary
After last weeks 4:0 where Dortmund did not have to do more than they actually did, the game against Karlsruhe was everything but sovereign. Karlsruhe had quite a few possibilities to hit the goal, however, our defense had one of his good days and in the end we fought against hard working and eager Karlsruhe players and should have not been surprised if they had actually scored. In the end it is important to also win those games that do not comprise of beautiful offensive moves and easy operating players but of a fighting team.