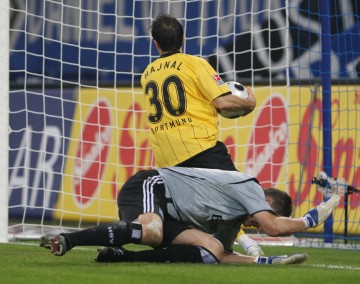 Many supporters were not sure whether the swap deal including Zidan and Petric would be of any benefit for our beloved club. Looking at this weekend's match in Hamburg leaves only one result: Hamburg made a damn good deal. Mladen Petric scored once and set another one up for Olic. Only Hajnal was able to score for BVB.

Scenario/Line up
Borussia Dortmund had to cope with some players missing. Frei, Hummels, Schmelzer, Dede and Valdez were missing due to injury. On the other hand Hajnal returned. Zidan and Kuba made up our attack, backed by Hajnal, Kehl, Kringe and Tinga. Subotic, Kovac, Owomoyela and Lee were our flat four. HSV coach Martin Jol replaced Demel and Guerrero by Boateng and Benjamin.

First Half
Hamburg was dominating the first minutes and had its approach in minute 9. Robert Kovac was able to clear the ball but a HSV corner followed. Trochowski took the set piece and found Mladen Petric 10 metres in front of the goal. The Croatian national pushed Kovac a little bit and then headed a lob ball direction Weidenfeller's goal. Unfortunately the ball had such a weird flight path that it hit the net in the top right corner - 1-0 for HSV!
It took BVB another 5-10 minutes to get into the match and close gaps in midfield. HSV on the other side lost domination and stood deep into their own half, waiting for counter attacks.
Central defender Neven Subotic set the first highlight for Borussia Dortmund. In minute 23 he tanked through midfield and fired a powerful shot. Hamburg keeper Frank Rost needed all his talent to slightly touch the ball and deflect it. This rocket hit the bar only!
Hamburg reacted and raised pressure a little bit. Immediately they got a free kick 20 metres in front of our goal. Trochowski took the free kick and aimed for the lower left corner. Roman Weidenfeller was there but the ball hit the post and from there Weidenfeller's back, where it lost drive. Our goalie was able to save jut before a Hamburg striker could score...that was close.
Nonetheless it took HSV only 3 minutes to make up for this chance. A long ball found Petric in midfield. The former BVB striker played a direct pass into Olic's route. He had no problem pacing into the box, dribbling past Weidenfeller and scoring - 2-0 for HSV! That's was it for the first half. An ultra efficient Hamburger SV scored twice from 3 approaches. 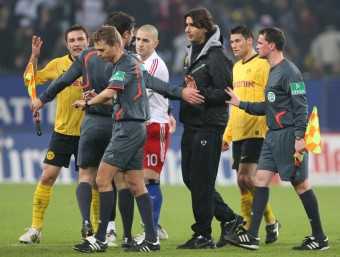 Second half
Jürgen Klopp reacted and replaced Kuba, who was still not able to play for 90 minutes, by Diego Klimowicz. Surely a hint that we would try more high balls. And really in minute 48 Owomoyela paced down the right side. His beautiful high ball found Klimowicz' head. Frank Rost with a nice save that dropped in front of Tamas Hajnal. The tiny Hungarian playmaker had no problem hitting the net - 1-2! Borussia Dortmund was now really dominating the match, while HSV struggled to create any offensive actions. Anyway, it took BVB another 20 minutes until they created another dangerous situation. Tamas Hajnal with a superb solo through midfield that was finished with a shot from 17 metres. The approach was only centimetres wide!

But while Dortmund was still pressing, Hamburg had no big problem keeping us away from their box. One of the few remaining highlights was a header by Klimowicz 8 minutes from time. And again Frank Rost saved. The last approach was in minute 88 when Mathijsen needed all his pace to clear a nice cut-in by Hajnal. And so the match ended with Borussia's second lost match this season.

All in all our performance was not too bad. During the first 45 minutes no team was able to dominate. Nonetheless HSV understood how to capitalize from their few approaches. The second half was clearly dominated by Borussia Dortmund, we "just" lacked efficiency in front of the goal.

With this loss we are now stuck in the middle of nowhere with 18 points from 12 matches. We have now Frankfurt at home and should really earn three damn needed points.

Statements
Martin Jol: „In the first half we did very well, but after the break Dortmund was clearly dominating. We lacked midfield passing options, but at least fighted. So all in all I am satisfied."

Jürgen Klopp: „For what we invested, we didn't get paid off. For that we drive back home disappointed. We didn't delivered a bad match, but we weren't totally concentrated in some situations." 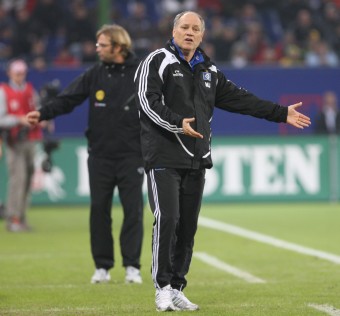