...never the way you expected. 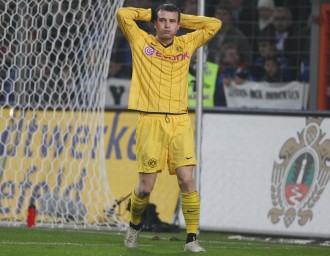 For most of Borussia's fans in black'n yellow it was clear long before kickoff. Bielefeld should only be a little stone to the road towards the inofficiall Championship in the Ruhr Basin. But the position was absolutly not as clear as it may have looked before the match. Certainly Armina fight against relegation, but, as the victory against Leverkusen shows, is always capable of winning against teams placed higher than Arminia Bielefeld. Coach Klopp warned, that the match would absolutly not be an easy task.

After recovering from injury Patrick Owomoyela returned to the team and Hummels found himself on the central defense position in midfield. Santana took his place in the central defense. Nuri Sahin and "Kuba" took seat on the bench. As last week Zidan and Frei acted as attackers, supported by Hajnal from the offense midfield position.

The match:
Just after the beginning it became clear that, even if it was St. Claus Day, today it was no day to make presents to each other. Especially Bielefeld fought for every inch which it made hard for Borussia to get into match. Armina won most of the duels (68 %) and so it was only conclusive that they became chances to score (Wichniarek 2nd and Mijatovic 20th). It took over half an hour before Borussia created its first chance, but Bielefelds Keeper Eilhoff fantasticly saved Hummel's Header, later Frei missed only by inches.

During the break everyone agreed that the match was neither fish nor flesh. Especially Borussia made lots of mistakes and technical errors. 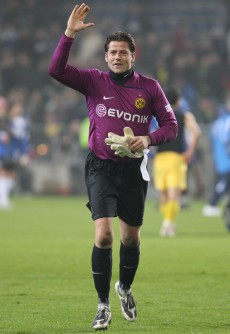 But that should change fort he second half, at least at the beginning of it. As against Wolfsburg Borussia's offense became much stronger with "Kuba" in the match. Eight minutes after the break the first real big chance for Borussia. A quick attack over the right wing where the ball was passed by Hajnal to Kringe. A trained attacker in this position asks the opponent keeper where he likes to have the ball. But, as you know, Kringe is no educated attacker, so he missed the best chance in this match. And that was all for the first half. After this chance Dortmunds defense was in focus and opened several chances fort he home team. The best of them had Bielfeld's Kirch, who played the ball over Weidenfeller but thankfully could not manage to place the ball in the goal.

Strange situation in the middle of the second half. Hummels played a catastrophic ball to Weidenfeller who stopped the ball with his breast, but also got a hand on the ball so it was lucky, that the referee did not decide on free-kick inside the penalty area.

Ten minutes before the end Bielefelds Keeper Eilhoff had to save one last time when Hajnal tried to play a ball in the higher corner of the goal, but he managed to redirect the ball over the bar. Santana tried to score by head, but the ball became a little too high so it missed the entire goal. Arminia's Wichniarek (once more) and Mijatovic had two last chances to score, but also missed.

Summary:
Our heroes seem to be a little drained, since there was not much to be seen from Klopp's pressing and agressiv attacking. Besides that there were too many errors in the forward and the backward moving. In short, a draw which is absolutely ok, perhaps a little bit lucky since Bielefeld had a lot more chances to score and to keep the points in BielefeldStatistics