Let's get started in Leverkusen 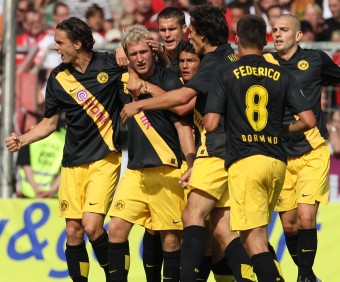 After months of waiting and wondering how Borussia would manage the start of the Bundesliga season of 2008/09, we can finally see how the team will be doing on Saturday against Leverkusen for the first match in Bundesliga.

It is the first of the season, so predicting any advantages for a team is hard business. But since we got some data on the paper and the results from preparatory matches, we might be able to forecast where the teams' strengths and weaknesses lie (and you know that this still doesn't make the result in the end of the day...).

Bayer has played quite promising preparatory matches but there are still some question marks behind the new and extremely young players from abroad who will have to integrate into the team (s. below). But it seems as if Labbadia, Bayer's new coach, is willing to form a concept of a young and success-hungry team that waits for its chance to opt for the international cups.

Since you are a regular reader on schwatzgelb.com (and you are!) you have already noticed that we have a quite similar atmosphere ion Dortmund. A very dynamic coach, young and promising players and some new optimism after last year's disappointing round. So you are going to see a match between quite equal team's in term of aims, structure and motivation. But it will be decisive only whether the quality will be equal, too)

As for the opponent in Leverkusen - a neglected part of the world, which was arguably built for the purpose of parking for visitors heading towards cologne - there are some major changes undergoing the team. Firstly, we will see Bruno Labbadia as the team's new coach. And then there are Renato Augusto (6 millions) for the midfield as well as Henrique (from Barca) and Djakpa for the defence. And last but not least there's Patrick Helmes, an already established striker from cologne, who has potential for being a German international. Since these players, alongside the remaining ones from Bayer such as Castro, Barnetta and Vidal are quite young, it should not surprise you that Bayer got one of the youngest team's consisting of lots of talented though young players. Also note, that Barbarez and Ramelow, two real oldies, have quit there careers.

It is very likely that the new ones will make it into the starting eleven, see the line-up below.

On tactics everything's just said in a previous article by schwatzgelb.com (see "Focus on tactics"). But what's more important for tomorrow is how confident the team will be. Jürgen Klopp will try everything to put down pressure from the team and to enforce the motivation and the conscience of being able to fetch 3 points from Leverkusen. As for this aim, he will trust in Roman Weidenfeller between the posts. In front of him, Rukavina and Dede on the wings, and Subotic and Hummels in the centre will make up the defence. The defensive midfield will be made up by Kehl and Hajnal but note that the latter will be a lot more offensive. Kuba and Kringe will work the wings in the midfield. One post in the attack is clear, namely the one of Mladen Petric. But what about Valdez, who suffered from a sudden injury on Wednesday? Borussia's medics say that he may play, but a final decision will be made on Saturday. 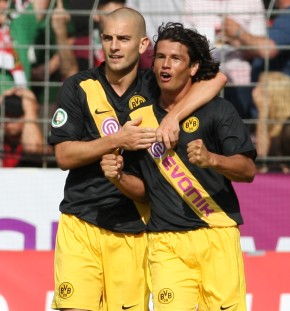 So, what else is important? Leverkusen will definitely start powerful and with quite a pace. Thus, it will be extremely important to stay secure for the first, let's say, 20 minutes. Hence, the team needs to be organised, especially in the defence.