Jan Koller is one of us 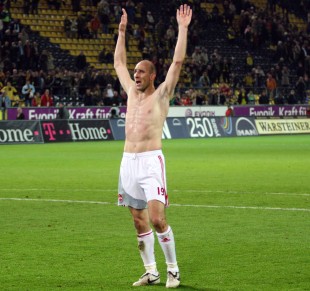 Maybe it was the highlight of the match. After a lousy 0-0 Jan Koller was the main character of the evening. The South stand celebrated a former BVB hero and now FCN player. Though the Nürnberg fans weren't that happy with that.

First Half
The first "highlight" of the match was an injury break when Marc-Andre Kruska was brought down. It shouldn't be the last attack that found his shoulder. Still he managed to play until deep into the second half. In minute 14 an Nürnberg attack driven by Saenko found Vittek in the box, where he went down. But that was clearly no penalty. All in all it was a lame match with few action on both sides, though Nürnberg had a slight advantage in midfield. But after a minor chance by Vittek there was suddenly out of nothing the biggest chance of the whole match. A brilliant long pass cut through Nürnberg's defence like a hot knife through butter. Alexander Frei was up and away and had nothing but 40 metres of green grass and goalie Klewer between him and the goal. Unfortunately his poor effort was easily cleared by Klewer. That must have been Borussia's lead!

To demonstrate how poor this match was, the audience saw a very lousy free kick by Mladen Petric in minute 32. Only 5 minutes later Nürnberg had two chances in a row. The first one was wasted by Koller and Mintal, and the second one, a nice header by Koller, was cleared by Marcel Höttecke big style! Though he is our goalie number 3 only, this boy has everything it needs to get to the top! The last highlight of the first 45 minutes was a shot by Kringe that was wide. 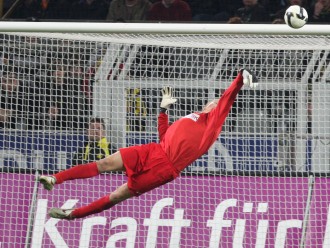 Second half
While the first 45 minutes saw a more than weak Borussia Dortmund, the black yellow guys improved a little bit in the second half. A shot by Kuba and header by Kringe in minutes 51 and 52 weren't a real threat for Klewer but demonstrated that BVB was the better team now. And only 1 minute later a nice high cut-in by Rukavina found Alexander Frei's head. But unfortunately his effort was wide. On the other side Nürnberg had a big chance when Koller's pass found Vittek 8 metres in front of BVB's goal. Luckily he tumbled and lost the ball. And as Nürnberg wasn't able to score BVB central defender Robert Kovac tried to help them. A clear attempt by Kovac bounced from him in curious style and hit the bar! While FCN was now winning back midfield domination, there was another nice chance by Alexander Frei. His effort from narrow angle was cleared by Klewer. 10 minutes from time it was Nürnberg who had the last chance to prevent a goalless draw. A free kick by Misimovic was deflected by Galasek. It took another last brilliant save by Marcel Höttecke. And so this lousy match ended 0-0 after 90 minutes of poor football.

Summary
That was not the type of football the masses in stadium expected. 2 lousy teams that created most of their few chances by luck. Maybe the only bright spot on this dark Friday night was young goalie Marcel Höttecke who seems to be massively talented. With this draw we are more or less saved from relegation battle.

Statements
Thomas Doll: „The first half was poor football. It was slow and we seemed frightened. You could feel that both teams didn't want to lose this match."

Thomas von Heesen: „It was important to end with a shut-out. The team presented as a real unit. But when you don't score, you can't win. Our position regarding relegation battle has improved really. But I am convinced that we can still manage to stay in Bundesliga" 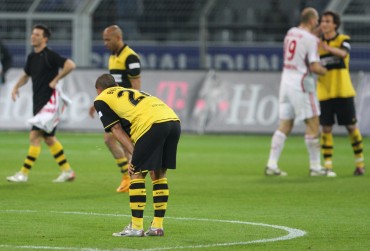