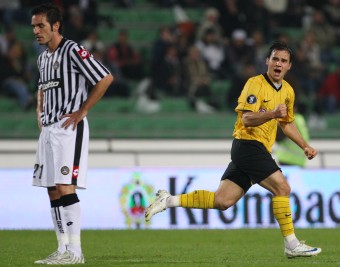 It was an impossible mission, but we were close to success. After a bombastic match that saw us 2-0 in the lead after 120 minutes of exciting football, we quit UEFA Cup by losing the penalty shoot out. Nonetheless a fantastic performance by the players and by the supporters in the guest section.

The first UEFA Cup away match since 5 years! Time for the whole Borussia family to travel through Europe. Really a shame that Udine offered app. 1.700 tickets for BVB supporters only. We easily could have sold 4.000 or more tickets. About half of those 1.700 tickets were used for a special fan train from Dortmund to Udine. And so 900 BVB supporters, stuffed with beer, food and a glimpse of hope entered the train in Dortmund on Wednesday. A joyful journey via Austria and with lots of chants, beer drinking and BVB small talk laid ahead of us. All kind of supporters were there: Ultras, older BVB fans, parents with kids. Really a nice mixture.

Klopp made 2 chances compared to last weekend. Frei was our only forward, o Valdez stayed on the bench. Kovac replaced Santana. Udine coach Marino threw Di Natale and Pasquale in instead of Lukovic and Sanchez.

First half
We started like a hurricane. Already in minute 4 Frei's header forced Udine coach to a brilliant save. And yes, while we were still trailing the 2 goals we received at home 14 days ago, we were now in the driving seat. In minute 26 a free kick by Alexander Frei that was heading to the top corner was again saved by Handanovic. While the Spanish referee made some minor mistakes in favour of Udinese Calcio, he had his first big black out in minute 31. Flores penetrated Borussia's box while Kringe was rushing in from behind and stepping on Flores' foot, that brought the striker down. No whistle by the referee. Lucky BVB, that should have been a penalty. But also Udine had some nice approaches, i.e. in the 38th minute when Inler dribbled into our box and took a powerful shot. It needed Roman Weidenfeller's best to clear this one. The consecutive corner kick was then cleared by Lee on the goal line! And while everybody was waiting for the half time whistle and we were already more than 1 minute into overtime, the first part of "il miraculo" happened: Kuba once again paced down the right wing and played a short pass to Hajnal, who was waiting at the right corner of Udine's box. Storming into the penalty area, he passed 2 Udine defenders and fired a low, not too powerful shot direction Udine's goal. It seemed as the shot was slightly deflected as keeper Handanovic was able to clear this more or less harmless shot - 1-0 for BVB! 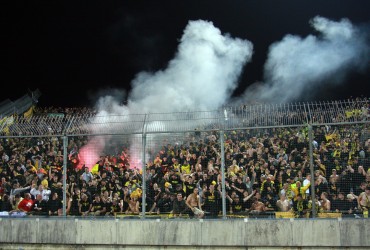 Second half
What a perfect end to the first half! We had half of our mission done! And Borussia Dortmund tried to raise the pressure. Only 4 minutes into the second half a corner kick for BVB. The deflected ball founds Frei waiting 5 metres in front of the goal and easily hits the net! Unfortunately the linesman raised his flag and signalled offside. As we could see later on TV a wrong decision! That would have been the earlier equaliser, what a pity! Both teams were now able to create more dangerous situations and so even Udinese Calcio had some nice approaches. Midway through the second half Jürgen Klopp added Nelson Valdez to attack and took Tinga off the pitch. Kringe had the next chance but instead of heading a high pass towards the goal he decided to pass the ball. As the pass wasn't very precise, this one was wasted. While Di Natale tested Weidenfeller with a fierce shot, BVB was now struggling to create more chances. A free kick by Neven Subotic in minute 87 was too high. The referre added 3 minutes of overtime. And believe it or not: In the 92nd minute of this match a Lee throw-inn found Nelson Valdez. The Paraguayan national with a lousy shot that found Tamas Hajnal 5 metres in front of the goal. The playmaker didn't hesitate and out the ball past Handanovic! 2-0 for Borussia Dortmund! The first leg result was equalised! The guest sector was instantly turned upside down. Maybe the heaviest goal celebration ever on a BVB stand! Unbelievable!!!!

Extra time
And so this exciting match was taken to extra time. During this 30 minutes both teams weren't playing that powerful anymore and so there were several chances on both sides. Weidenfeller had to clear 2 nice approaches by Udinese Calcio, on the other side Sadrijaj had a late chance, when his shot from narrow angle was brilliantly saved by Handanovic - that could have been promotion to the second round!

Penalties
0-0 Hajnal, who was together with Kuba the best player on the pitch, aimed to he right, but Handanovic clear big style

1-1 Quagliarella hit the first one for Udine

1-2 Kehl aims to the top right corner and scores

2-2 Kuba's ball is saved by Handanovic

3-2 Inler took the lead for Udine

3-3 Valdez with the equaliser

4-3 Lukovic scores without a problem

Finito - Udinese Calcio proceed to the 2nd round 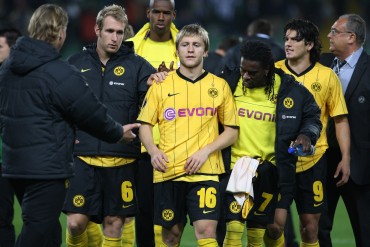 Summary
This was a brilliant, legendary evening in Udine. Borussia was the better team and earned the 2-0 lead. Unfortunately we weren't able to hit a 3rd goal and were unlucky with the penalty shoot out. Nonetheless the team and the supporters were first class on this evening. Fighting players and a fantastic guest section that rocked the stadium. All in all a performance that gives hope for the future, even though lost the UEFA Cup competition for this season.