Give us a break ? we need it. A sunday draw against Hannover 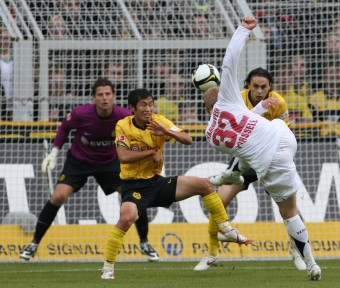 After Thursday's impressive game against Udinese Calcio with the tragic ending, Borussia hosted Hannover this Sunday for the seventh Bundesliga match day. After Bremen and Leverkusen failed to win their respective games on Saturday we had the chance to climb all the way to the top of the league. With Schalke and Hamburg both not getting three points out of their matches (played at the same time) and Borussia winning against Hannover we could have greeted from the very top.

A tough task however. Borussia did not make use of the home team advantage against Hannover in the past four seasons. The Leinesiders had a disastrous start to their campaign but beat struggling Bayern Munich in their last match. Hannover had scored no goal while conceding nine out of their three away matches this season. They lost every single one of it. Jürgen Klopp fielded nearly the same line-up as on Thursday, it was only for Alex Frei to get a deserved break. He was replaced by hard working Valdez. Hajnal again took command as of the diamond in midfield, our own Frank Ribery Kuba was ready to upset the Hannvoer defense. Lee and young "Schmelle" Schmelzer, our silent warriors of the sidelines, faced Huszti and Stajner.

First half
And so the game kicked off on a rainy Sunday afternoon. Some 67.000 fans found their way to Westfalenstadion. Borussia had a better start and after four minutes a great cross from Hajnal and a Kuba swing into the box, Valdez just missed the ball. Hannover tried their luck through our central defense and nearly caught Borussia after six minutes. Schlaudraff had stuck the ball through to Forsell who was denied by Weidenfeller. Then from way into our right defense a great move developed. Lee passed the ball to Hajnal who let it pass to Kuba. The Polish international picked up the ball and saw Valdez in front of the box. He picked up the pass and twisted around astonished Vinicius, he finished off this excellent move by hammering the ball directly under the cross bar. Something Borussia fans have been desperately waiting for for a long time. Valdez def is on his way and put us on our way into the match. 1-0 up after 10minutes. Chants waved around Westfalenstadium, "Spitzenreiter, Spitzenreiter, Hey Hey Hey" (Top Of The League, Top Of The League). Come: Scoreboard! After 14min we were still on top and the scoreboard was about to prove it but showed a wrong ranking with bloody Hoffenheim on top. The crowd was silenced and again silenced a few minutes later when Referee Stark denied a perfect goal for us. Kovac had headed the ball home after a Hajnal corner with German international keeper Robert Enke only clearing some meter after the line. Stark and his assistant eventually had not seen it. Borussia was very much in command of the match at that time but needlessly gave play out of hand after that wrong call by Stark. Kringe, who had one of his bad days, struggled to get a pass to his team mates, was caught out by Cherundolo in defense. Cherundolo swung the ball into the middle. It was perfectly picked up by unmarked Forsell. He made no mistake. And it was 1-1. Our UEFA-Cup-heroes now were tired and Hannover pushed for another goal but Huszti missed a big chance after half an hour when his shot rolled past Weidenfeller but also past the post. The good Bundesliga was tied at half time fter both Valdez and Kringe right before half time missed good opportunities to make it 2-1. 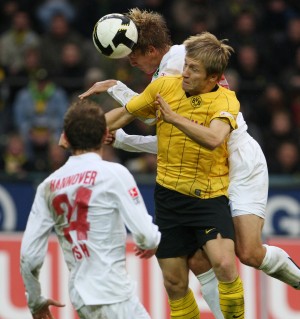 Second half
BVB coach Jürgen Klopp let Alexander Frei enter the pitch. Our top striker was surely tired after a long injury period and a tough game in Udine midweek. Kringe, who had an awful afternoon, stayed in cabin. Not more than 3 minutes into the second half, Hajnal suddenly appeared in front of Hannover goalie Robert Enke, but unfortunately Enke denied our Hungarian playmaker with a nice save. But Hannover 96 had still their part of the match and only few minutes later Subotic had to clear two times against Balitsch and Schlaudraff. To add up the mess we allowed even Jiri Stajner a nice header approach that was finally wide. Just during these minutes the 3rd round of this season's DFB cup was drawn. Borussia Dortmund face Werder Bremen at home. Surely a big name but nonetheless we aren't without any chances. Let's get back to the happening on the pitch. While Hannover dominated the first half of the second 45 minutes, Borussia Dortmund was now getting back into the driving seat. A corner kick found Valdez, but his attempt was again saved by Enke. Klopp took off another player and Sahin entered the pitch for Tinga. And the young Turkish national had a fine distance shot with only 5 minutes the field. But that one was way too high. Hannover 96 was during this period until the end of the match not keen to start any attempts to penetrate Dortmund's defence. They seemed quite satisfied with 1 point in Dortmund. Though Borussia had another 3 chances in minute 83, 85 and 90. But Hajnal, Kuba and Alexander Frei with a free kick didn't finish with a goal and so this match ended with a draw.

Summary
Looking at the match and especially Kovac' denied regular goal, we should have finished the 7th Bundesliga match with 14 instead of 12 points. But having in mind that we played 7 matches in 23 (!) days and that wen went 120 plus penalties in Udine last Thursday, the result is absolutely ok. We have now 2 weeks to rest and then we have to travel to Werder Bremen. Surely not an easy task for our blackyellow guys.

Statements
Jürgen Klopp: „It's not easy to value this match. We had an amazing starting period and scored once. We even added another one, that the referees didn't saw. We then allowed Hannover 96 the equaliser with their first chance. We then somehow lost control. Towards the end we had 2 late chances and so should have been winner of this match."

Dieter Hecking: „I wasn't happy with our first 20 minutes. We were too passiv and couldn't have complained if we would have been behind 2-0 at that moment. But that gave out team the chance to come back. At the end we even tried to win this match. On the other 3 points here in Dortmund wouldn't have been deserved at all. The draw was ok." 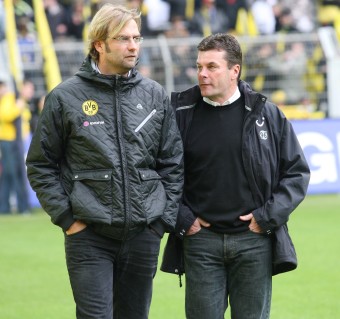