First goalless draw of the season 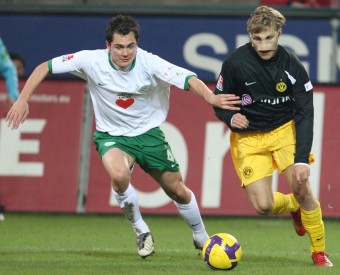 After a series of two wins in a row Borussia Dortmund finally lost two points. In a not really exciting match Wolfsburg earned a point because of there rock solid defence. The blackyellows weren't able to be any threat for Benaglio's goal. Nonetheless we managed to stay on the sixth spot of the Bundesliga table.

Scenario/Line up
Jürgen Klopp had to cope with some late time injuries. Kehl, Valdez and Owomoyela were side-lined while Kuba got a flu and was not ready for 90 minutes of intense football. So we started with Lee as right back, like in his first matches for BVB, Schmelzer returned into the starting line-up as left-back. Tinga was placed in holding midfield, while Sahin played on the left and Kringe on the right side. Zidan and Frei made up our offence.

Felix Magath had to do with one starting player missing only. Grafite was still suffering from a cucussion suffered during training last week. 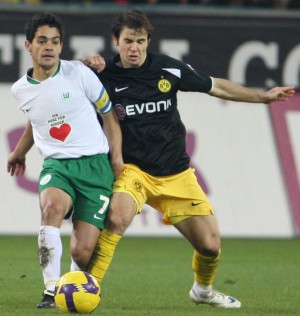 First Half
Both team started slow. Maybe not surprising as on the one hand Borussia Dortmund is not a supreme power at home with only 2 wins and 5 draws. On the other hand Wolfsburg is still without any victory on the road. Nonetheless the wolves, as they are called, were the better team during the first period of the match. Their defence stood rock solid and they tightened any available space in midfield immediately, making it hard for BVB to penetrate Wolfsburg's box. The guest team was not just defending but also driving some attacks, especially through their right wing. Maybe it was not their strong right wing but Schmelzer and Sahin on our left side. Especially Sahin in left midfield was not holding his position and leaving Schmelzer face to face with two Wolfsburg player. Dejagah had so time and space to initiate some attacks this way.

A first more or less dangerous situation on the other side of the pitch was created by Zidan. A long pass by Hajnal found the fast Egyptian. Unfortunately his shot from narrow left angle was wide. And while we struggled to create more chances, a good amount of approaches were stopped because our strikers stepped into Wolfsburg's offside trap. Surely that can happen sometimes, but not 12 times within 45 minutes!

Second half
The second 45 minutes started like the first ones: Both teams with strong defending lines and weak offences. Although Borussia Dortmund was now a little bit more into the match and slowly won dominance over midfield. Yet they weren't creating significantly more chances. In minute 53 a corner kick found Zidan's head, but da Costa was able to block the ball, which passed the goal on the left side. Only 4 minutes later the Egyptian national player was substituted by Kuba. As said the Polish winger was suffering from flu and so not up to full potential. But with his first ball contact he created more danger than the whole team in nearly one hour. A quick one-two with Kringe found the ultra-quick Polish national pacing down the right wing. Unfortunately his cut-in was not very precise and so this good chance as wasted. In minute 74 Roman Weidenfeller earned his wings as he brilliantly save a shot by Misimovic. And even referee Graefe was not to eager to create any hectic. A doubtful handplay by Subotic was not sanctioned. Some minutes later the young defender was again in the middle of the heat as he ofuled Dzeko within the box. Even as a Borussia Dortmund supporter you couldn't have complained if Manuel Graefe had pointed to the spot. We were lucky again! And so also these second 45 minutes ended goalless. 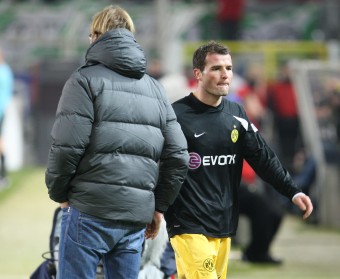 Summary
Looking at the 90 minutes we should be happy with a draw. Wolfsburg had the more dangerours approaches and even could have got one or two penalties during the second half. On the other hand it is frustrating as this was the sixth draw in 8 matches at home! Imaging where could have stand, had we won not only two but four or five matches in Westfalenstadion! Whatever, it is our duty now to come back from Bielefeld with a threepointer. Then everything should be fine.

Voices
Jürgen Klopp: „For most of the spectators this match was surely no fun. It was a draw of a not so beautiful kind. The result is ok. I am not satisfied with our performance. Up front we lacked esprit."

Felix Magath: „I am satisfied with the match but not with one point. We didn't allow much, and wasted our chances."